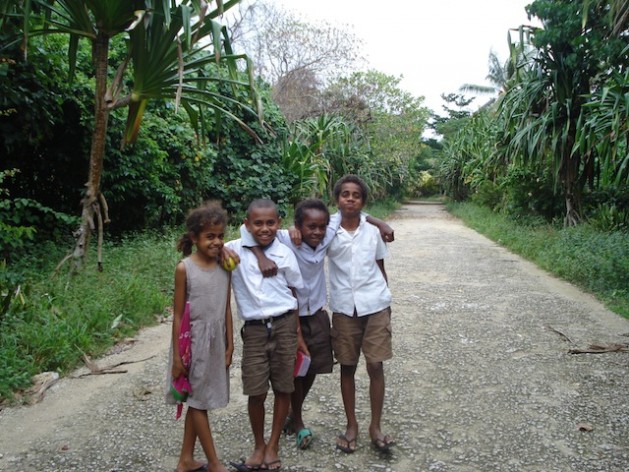 Organisations in the Pacific Islands believe that achieving the post-2015 development goals depends on getting implementation right. Credit: Catherine Wilson/IPS

SYDNEY, Jan 19 2015 (IPS) - As the Millennium Development Goals (MDGs), a set of poverty-alleviation targets set by the United Nations, come to a close this year, countries around the world are taking stock of their successes and failures in tackling key developmental issues.

The Pacific Islands have made impressive progress in reducing child mortality, however, poverty or hardship, as it is termed in the region, and gender equality remain the biggest performance gaps.

“The main criticism of the MDGs was the lack of consultation, which resulted in a set of goals designed primarily to address the development priorities of sub-Saharan Africa and then applied to all developing countries." -- Derek Brien, executive director of the Pacific Institute of Public Policy (PIPP) in Vanuatu
Only two of fourteen Pacific Island Forum states, Cook Islands and Niue, are on track to achieve all eight goals.

Key development organisations in the region believe the new Post-2015 Sustainable Development Goals (SDGs) proposed by the United Nations are more on target to address the unique development challenges faced by small island developing states. But they emphasise that turning the objectives into reality demands the participation of developed countries and a focus on getting implementation right.

“The main criticism of the MDGs was the lack of consultation which resulted in a set of goals designed primarily to address the development priorities of sub-Saharan Africa and then applied to all developing countries,” Derek Brien, executive director of the Pacific Institute of Public Policy (PIPP) in Vanuatu, told IPS.

The tropical Pacific Ocean is home to 22 diverse island states and territories, which are scattered across 15 percent of the earth’s surface and collectively home to 10 million people. Most feature predominantly rural populations acutely exposed to extreme climate events and distant from main global markets. Lack of jobs growth in many countries is especially impacting the prospects for youth who make up more than half the region’s population.

Brien believes the ambitious set of seventeen SDGs, to be formally agreed during a United Nations summit in New York this September, have been developed with “much broader input and widespread consultation.”

“From a Pacific perspective, it is especially welcome to see new goals proposed on climate change, oceans and marine resources, inclusive economic growth, fostering peaceful inclusive societies and building capable responsive institutions that are based on the rule of law,” he elaborated. 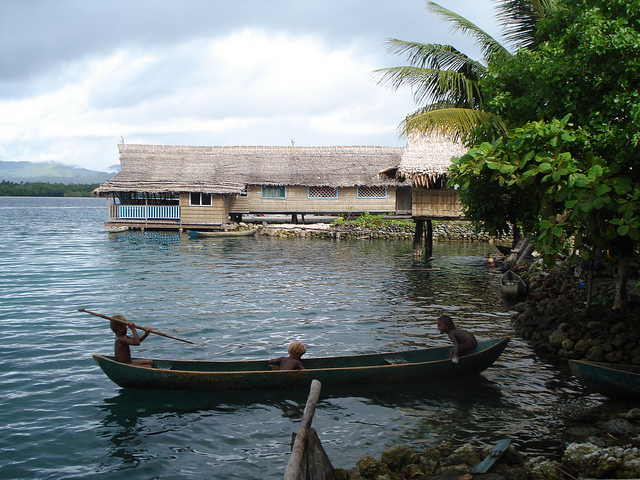 Pacific Island states are surrounded by the largest ocean in the world, but inadequate fresh water sources, poor infrastructure and climate change are leaving some communities without enough water to meet basic needs. Credit: Catherine Wilson/IPS.

With 11 Pacific Island states still to achieve gender equality, post-2015 targets of eliminating violence against women and girls, early and forced marriages and addressing the equal right of women to own and control assets have been welcomed.

For instance, in Papua New, the largest Pacific island, violence occurs in two-thirds of families, and up to 86 percent of women in the country experience physical abuse during pregnancy, according to ChildFund Australia. 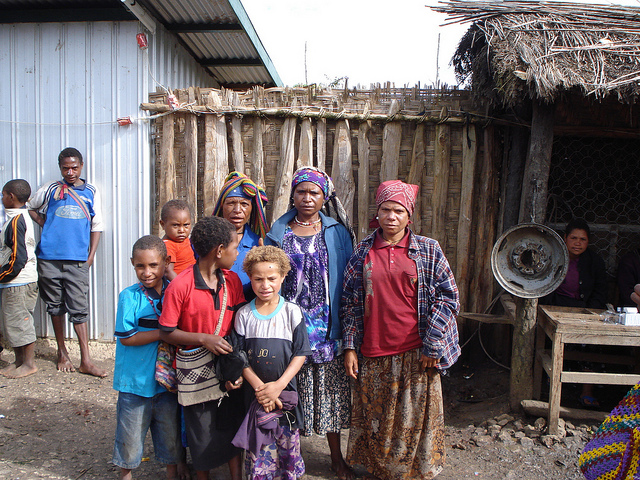 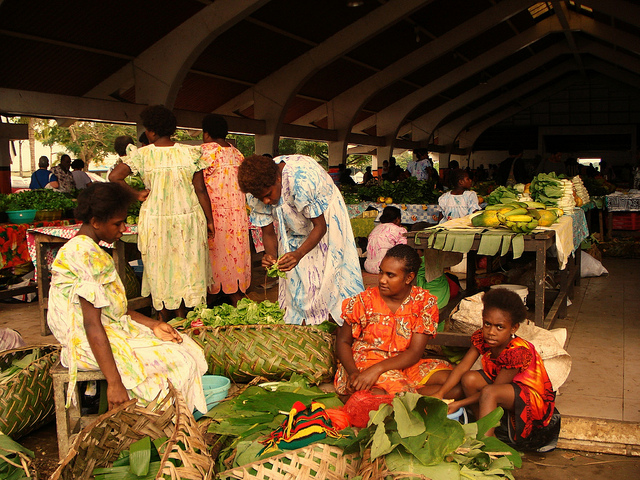 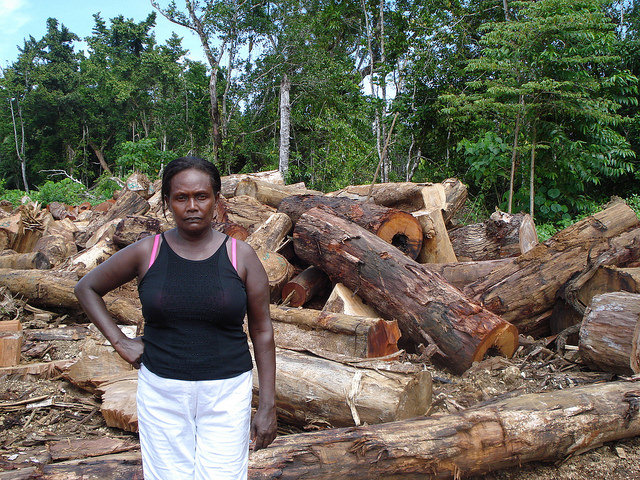 Improvement is also hindered by entrenched stereotypes of female roles in the domestic sphere and labour discrimination. In most countries, the non-agricultural employment of women is less than 48 percent.

The major challenge for the region in the coming years will be tackling increasing hardship.

Inequality and exclusion is rising in the Pacific Islands due to a range of factors, including pressures placed on traditional subsistence livelihoods and social safety nets by the influence of the global cash and market-based economy, the United Nations Development Programme (UNDP) reported last year.

According to the World Bank, more than 20 percent of Pacific Islanders are unable to afford basic needs, while employment to population is a low 30-50 percent in Micronesia, Fiji, Kiribati, Marshall Islands, Nauru, Samoa, Tonga and Tuvalu. 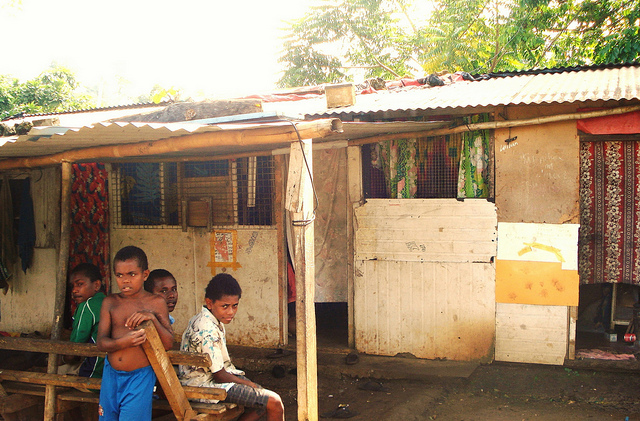 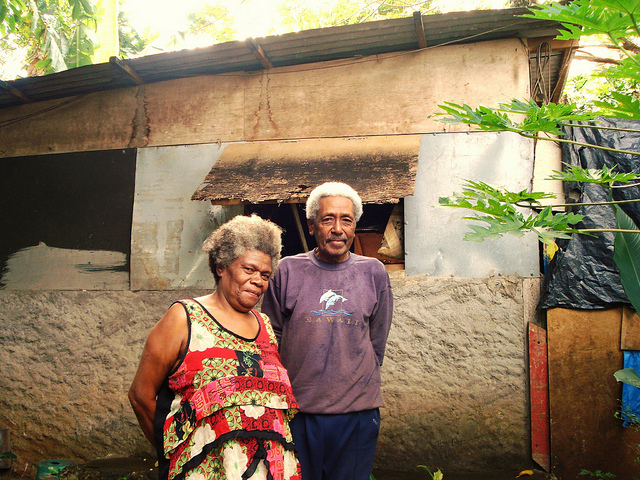 Many people in Freswota, Port Vila, capital of Vanuatu, have spent more than 30 years or most of their lifetimes in informal housing settlements. Credit: Catherine Wilson/IPS 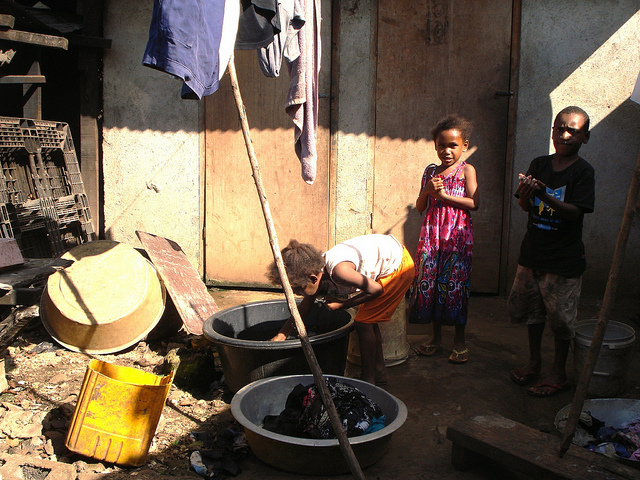 In this community in Port Vila, capital of the Pacific Island state of Vanuatu, one toilet and water tap serves numerous families. Credit: Catherine Wilson/IPS

Rex Horoi, director of the Foundation of the Peoples of the South Pacific, a Fiji-based non-governmental organisation, agrees that the SDGs are relevant to the development needs of local communities, but he said that accomplishing them would demand innovative thinking.

For example, in considering the sustainable use of terrestrial and marine ecosystems, “you have marine biologists working separately and then you have biodiversity experts and environmentalists working separately. We have not evolved in terms of trying to solve human problems with an integrated approach to development,” Horoi claimed.

He called for tangible implementation plans, aligned with national development strategies, to accompany all goals, and more integrated partnerships between governments and stakeholders, such as civil society, the private sector and communities in making them a reality.

At the same time, delivering on the expanded post-2015 agenda will place considerable pressure on the limited resources of small-island developing states.

“Many small island countries struggle to deal with the multitude of international agreements, policy commitments and related reporting requirements. There is a pressing need to rationalise and integrate many of the parallel processes that collectively set the global agenda. The new agenda should seek to streamline these and not add to the bureaucratic burden,” Brien advocated.

PIPP believes industrialised countries must also be accountable for the new goals. The organisation highlights that “numerous transnational impacts from high income states are diverting and even curbing development opportunities in low income countries”, such as failure to reduce carbon emissions, overfishing by foreign fleets and tax avoidance by multinational resource extraction companies.

Brien believes that “rhetorically all the right noises are being made in this respect” with the United Nations promoting the SDGs as universally applicable to all countries.

“However, it remains unclear how this will transpire through implementation. There remains a ‘developing’ and ‘developed’ divide with perhaps still too much focus on this being an aid agenda rather than a development agenda,” he said.