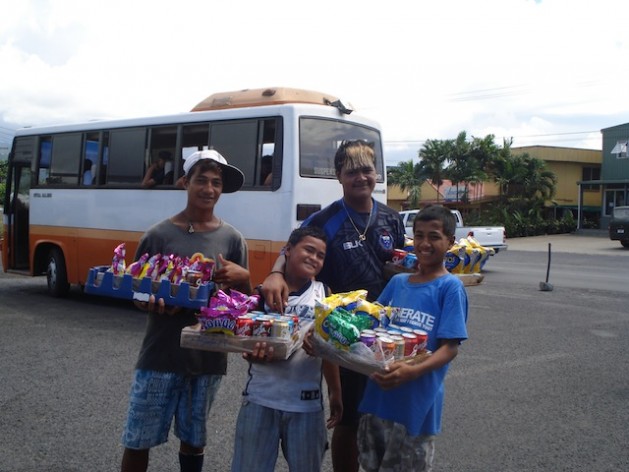 In Samoa two in three young people make a living in the informal economy, including selling food items in market areas and bus stops in the capital, Apia. Credit: Catherine Wilson/IPS

Generating employment opportunities for tens of thousands of school leavers is now an urgent issue on the Pacific’s post-2015 development agenda. Otherwise a poor landscape of opportunity could jeopardise the potential of a generation whose public and economic participation is vital to progressing sustainable development in the region.

Approximately one quarter of Samoa’s population of 190,372 is employed and economically active and youth account for about half of the remaining unemployed, according to government statistics.

“In the villages, I think that is where most of the youth are static, but there is also a very noticeable shift with urbanisation that is causing a number of youth to come to Apia and they are becoming idle,” she continued.

Lack of sufficient job creation is affecting both young people who lack adequate education, as well as those who possess qualifications and experience. The only route for many of the latter is emigration to larger economies, such as New Zealand, Australia and the United States.

With 76 percent of those with a tertiary education leaving, the country is experiencing a ‘brain drain’ and 44.7 percent of private sector employers are experiencing skills shortages, reports the International Labour Organisation (ILO).

Samoa’s economy, dependent on agriculture, fisheries, tourism and remittances, has been severely impacted in the last 20 years by natural disasters. In 2012 Cyclone Evan devastated infrastructure and crops resulting in economic losses equal to 30 percent of GDP.

Only one-quarter to one-third of Pacific Islanders finishing school are likely to secure formal sector employment, according to the United Nations Development Programme (UNDP). This leaves a high proportion of an estimated more than 5,000 school leavers each year vulnerable to exclusion in Samoa, where formal sector employment is around 30 percent.

The social impacts of high teenage pregnancies and a low secondary school completion rate, with an estimated 35 percent of this age group in Samoa not in education, are also aggravating factors.

Fruean believes the main reason is the inability of families to pay school fees and suggests the government’s introduction last year of fee-free secondary education will help improve the final year retention rate of 48 percent.

But there are also questions about the quality and relevance of education for employment demand.

Institutions “are still bringing out lawyers when there is a desperate need here for electricians and plumbers, and at the university they are producing hundreds of students with commerce degrees, but that is a market adequately filled,” Fruean explained.

Somaya Moll, business, investment and technology expert with the United Nations Industrial Development Organisation (UNIDO), advocates private sector development, which “basically enables people to take charge of their own lives [by giving] them the tools to do so.”

“Self-sufficiency, ownership and accountability are important and it is proven to work,” she told IPS during the United Nations Third International Conference on Small Island Developing States (SIDS) recently held in Samoa’s capital, Apia.

The small size of Pacific islands and their populations is a drawback for ‘economies of scale’, keeping costs of production high. But Moll said introducing entrepreneurship awareness into school curriculums and encouraging financial institutions to consider the creditworthiness of young people could improve the business environment.

The informal economy, which accounts for up to 70 percent of economic activity in the Pacific Islands and Caribbean regions, is a potential growth area, say regional experts.

“It has always been an important source of sustainability [in the Caribbean],” Dessima Williams from Grenada and UNIDO Senior Policy Advisor said during an interview at the U.N. SIDS conference.

“And what has happened recently is that as the formal sector has crashed, more and more other people are entering the informal sector” as are “young people coming out of college who are finding no jobs in the formal sector,” Williams added.

Fruean sees the same potential in Samoa where two-thirds of young people are making a living through informal activities.

“There is so much potential in the informal and agricultural sectors and we encourage the unemployed youth to become economically active in these sectors”, for example, through organic farming or creative production. The cultural and creative industries in the Pacific are reportedly growing at about seven percent per year.

Also “the solution of co-operatives is coming back because the cost of production is so high. A lot of young people [in the Caribbean] are producing music all together, or somebody is writing it and somebody is mixing it, so it is sustainable,” Williams said.

But if the informal sector is to play a role in sustainable and decent job creation, training, skills, working conditions, value addition and production standards need to be improved, she continued. Low productive subsistence activities also need to be up-scaled and developed with greater market orientation and potential for export explored, where feasible. In the agricultural sector alone, which accounts for two thirds of the workforce, only one quarter of production is for the market with the remainder for domestic consumption.

Many young people in the informal sector don’t have experience of budgeting and managing their money, and this is an important area of awareness that needs to be addressed, too, according to the Samoan National Youth Council.

Efforts to galvanise the potential of Pacific Islander youth must be expanded to prevent increased poverty and inequality in the next generation and the social fallout of disaffection when aspirations for productive lives are not fulfilled.