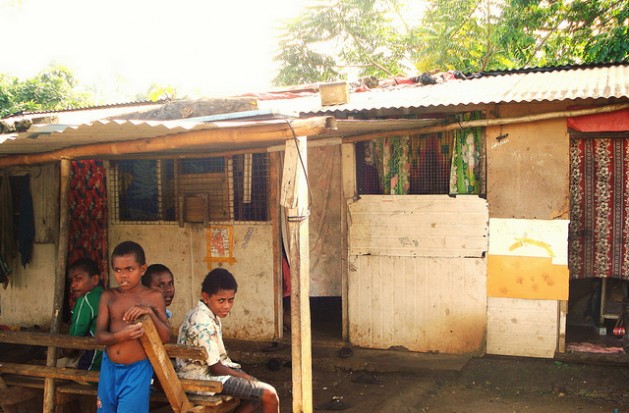 SYDNEY, Aug 12 2014 (IPS) - Suicide rates in the Pacific Islands are some of the highest in the world and have reached up to 30 per 100,000 in countries such as Samoa, Guam and Micronesia, double the global average, with youth rates even higher.

On International Youth Day, which this year focuses on ‘Youth and Mental Health’, young Pacific Islanders have highlighted the profound social and economic challenges they face in a rapidly changing world.

“Youths committing suicide seem to get younger and younger by the year,” Lionel Rogers of the Fiji-based advocacy and support group, Youth Champs for Mental Health, told IPS. “Stressors contributing to the growing trends of suicide are unemployment, social and cultural expectations, family and relationship problems, bullying, violence and abuse.”

“Many youths refuse to seek assistance from medical professionals due to the stigma associated with suicide and mental health. This along with our culture of silence has driven them further away and forced them to suppress their emotions.” -- Lionel Rogers of the Fiji-based Youth Champs for Mental Health
The Pacific Islands has an escalating youth population, with 54 percent of people in the region now aged below 24 years and those aged 15-29 years are at the greatest risk of taking their lives, according to the Secretariat of the Pacific Community (SPC).

Tarusila Bradburgh, coordinator of the Pacific Youth Council, believes that “the burden of multiple issues that affect young people in the Pacific Islands is enormous and many are not well-equipped to cope.”

A decade ago there were an estimated 331,000 annual suicides in the region, accounting for 38 percent of the world total.

Anne Rauch, organisational development advisor for the Fiji Alliance for Mental Health said, “There is […] significant under-reporting of suicide deaths. On outer islands and remote areas the body is buried before an autopsy can be performed. There is a lot of family shame about suicide so doctors will sometimes sympathetically report the causes of death.”

In 2012, there were 160 reported suicides in Fiji with the majority under 25 years of age, but accurate statistics are not available.

Under-funded and under-resourced mental health services are struggling to address the issue, with suicide representing 2.5 percent of the disease burden in the Western Pacific region, nearly double the rate of 1.4 percent worldwide.

According to a 2008 report by the non-governmental organisation Foundation of the Peoples of the South Pacific International, a significant root cause of young people taking their lives is intergenerational conflict as modern lifestyles based on individual freedom and independence challenge centuries of conformism to traditional Pacific communal social hierarchies and conventions of behaviour.

In the tiny central South Pacific territory of Tokelau, located north of Samoa, a national health department report claims a significant factor in youth suicide is relationship breakdowns, including those between parents and children.

There were 40 attempted suicides in the territory, which has a population of 1,500, during a 25-year period ending in 2004, with 83 percent of fatalities involving people under 25 years, and physical punishment of youth by their elders contributing to 67 percent.

Rauch added, “There are an increasing number of young people [committing] suicide because of poor examination results and failure to reach the academic standards expected by parents.”

An equal challenge facing the vast majority of Pacific youth is poor prospects of employment and fulfilment of aspirations generated by exposure to affluent global lifestyles through the digital and mass media.

In the small economies of most Pacific developing island states, high population growth of up to 2.4 percent is far outpacing job creation, thus greater access to education for many is not translating into better chances of gaining paid employment.

In the southwest Pacific Island state of Papua New Guinea, there are an estimated 80,000 school leavers each year, but only 10,000 will secure formal jobs. Youth unemployment is an estimated 45 percent in the neighbouring Solomon Islands.

The United Nations Children’s Fund (UNICEF) warns that “denial of economic and social opportunities leads to frustrated young people” and “the result can be a high incidence of self-harm” with “the loss of the productive potential of a large section of the adult population.”

According to SPC, actions to combat the tragic fallout of youth suicide for families, communities and a generation that has an important role to play in the region’s future should include measures to reduce the social stigma of mental illness and build the capacity of youth-friendly health and counselling services.

“Many youths refuse to seek assistance from medical professionals due to the stigma associated with suicide and mental health,” Rogers said. “This along with our culture of silence has driven them further away and forced them to suppress their emotions.”

Bradburgh advocates for all stakeholders, including communities and churches, to actively promote greater public understanding of mental illness, while governments need to invest in better mental health and outreach services.

“The more we openly discuss the issues in safe places and forums, the more knowledgeable we will be and better prepared to address the issue of suicide,” she said.