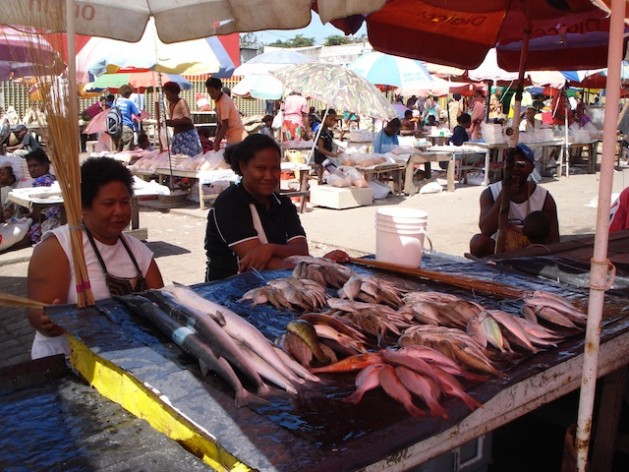 BRISBANE, Australia, Nov 26 2012 (IPS) - With youth populations growing faster than jobs in the Pacific Islands, young women, who are also confronting social pressures to conform to traditional gender roles, account for the highest rates of unemployment in most countries.

Female youth unemployment in South East Asia and the Pacific region is 14.2 percent, compared to 12.9 percent for males, while less than 35 percent of women aged 20-29 years in the Solomon Islands, Marshall Islands and Samoa are officially employed.

In Vanuatu, located west of Fiji in the South Pacific and with a population of roughly 246,000, the greatest gender-labour disparities are in urban areas, such as the capital, Port Vila, where only 43 percent of women are employed.

Men dominate jobs in both the private and government sectors.  Sixty-one percent of government employees, numbering 6,500 people, are male, while only 39 percent are female.

Though the majority of residents, known as Ni-Vanuatu, live in rural areas and practice subsistence agriculture, rapid urbanisation has contributed to a youth unemployment rate of 9.2 percent compared to the national figure of 4.6 percent.

The number rises to 27 percent in towns, where Ni-Vanuatu women are over-represented in jobs like cleaning, sales and service work.

“There is still a cultural barrier set by the expectation that women will fill traditional gender roles,” Solomon explained.  “Also, not many women are really qualified to get high positions in the government or private sector and they are not very confident amongst male colleagues.”

The impact of unemployment is “evident in the high (rates) of domestic violence and abuse against women”, she claimed.

“Men believe that because they are the breadwinners they can do anything to women. Young women who can’t find work often become depressed and are more likely to get involved in prostitution and become heavy kava drinkers.”

Youth bulge in the Pacific Islands

Worldwide, and especially in the Pacific Islands region, young people are three times more likely to be out of work than adults. Amidst the fallout of the global economic crisis, the International Labour Organisation (ILO) – which predicts youth unemployment will continue to rise in South East Asia and the Pacific – has warned governments to prevent against the emergence of a ‘lost generation’ who may never reap the benefits of productive, remunerated work.

The region’s ‘youth bulge’ is a consequence of rapid population growth.  Twenty percent of the Pacific Islands’ population of 10 million falls between the ages of 20 and 24 years.  Regional youth unemployment is estimated at 6.6 percent, although this figure omits those in casual, low-paid or subsistence occupations.

The struggle to find jobs is exacerbated by inequitable economic growth, especially in Melanesia; geographic isolation and limited land resources in Micronesia; and narrow economies in Polynesia.

Educational curricula in many Pacific Island states have also given priority to office-based skills, resulting in many young people being unequipped for vocational trades or local industries, such as tourism.

In the competition for local jobs, young women frequently come up against the mindset that their ‘rightful place’ is in the home, even when statistics show that female participation in education – particularly in places like Kiribati, Marshall Islands, Nauru, Samoa and Tuvalu – is higher than for males.

“It might be said that female unemployment has more to do with cultural attitudes that do not value female participation in politics and decision-making in the community, institutions and at the national level,” Mereia Carling, youth advisor for the Secretariat of the Pacific Community (SPC) in Fiji, commented to IPS.

“Other aspects of gender inequality in the education system – such as the fact that girls are often steered toward home economics and boys toward technology – may contribute to low female employment rates,” Carling added.

“So while girls are being sent to school, it appears that overall traditional attitudes still determine futures for young women.”

Tarusila Bradburgh, coordinator of the Pacific Youth Council, predicts that changes in cultural attitudes will take a long time, even though in countries like Fiji a large number of girls are completing school, receiving scholarships and attending tertiary institutions.

“Young women are slowly breaking boundaries particularly in male-dominated fields like engineering and civil aviation, but it is slow progress,” she said to IPS. “Until mindsets and attitudes towards women change, progress and change will be very slow.”

Other consequences of female youth unemployment in the region include poverty, crime, alcohol and drug addiction, prostitution and adolescent pregnancies.

According to the United Nations Economic and Social Commission for Asia and the Pacific (UNESCAP), lost productivity in the region due to low labour participation by women is somewhere between the range of 42 and 47 billion dollars every year.

The SPC believes that sectors with the potential to boost youth employment include agriculture, forestry, fisheries, the environment, tourism and culture.

The Pacific Youth Charter, drafted in 2006 by regional youth delegates, identifies the need to advance entrepreneurial skills in young people and increase access to diverse job opportunities across the Pacific.

Bradburgh added that young women, in particular, need “to be provided with life skills training which will help build their self-confidence and decision-making (abilities)”.

Matching education and skills training with employment growth areas will be crucial for the next generation to reach its full potential and contribute to development across the region.

Currently the Cook Islands and Niue are the only Pacific Island states likely to achieve full and productive employment by 2015.
(END)