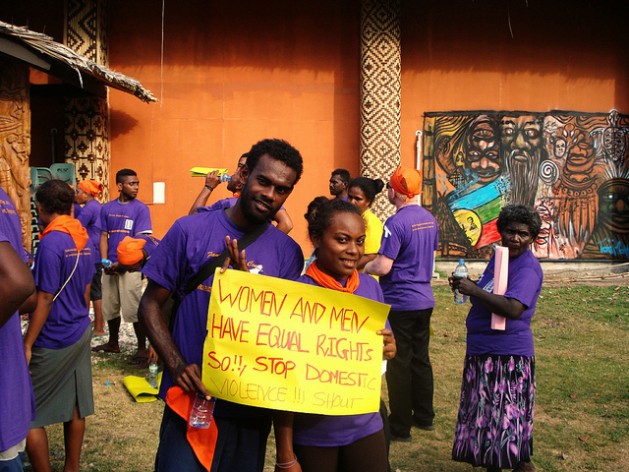 Progress on gender equality in the Pacific Islands is gaining momentum following a pledge by political leaders. Credit: Catherine Wilson/IPS

SYDNEY, Aug 13 2014 (IPS) - A pledge by political leaders two years ago to accelerate efforts toward closing the gender gap in the Pacific Islands has been boosted with the announcement that three women will take the helm of the regional intergovernmental organisation, the Pacific Islands Forum Secretariat, headquartered in Suva, Fiji.

The appointment is a significant breakthrough for women in the upper echelons of governance. According to Pratt, the Pacific Leaders Gender Equality Declaration made at the 2012 leaders’ summit in the Cook Islands has galvanised leadership action on the issue.

“A positive change has been the indirect creation of a peer review process on gender at the highest level,” Pratt told IPS, adding that gender equality is “slowly gaining traction at the central policy making level”, as high up as the prime minister’s office in some Forum countries.

Raising the status of women in the Pacific Islands is an immense challenge, given that the region has the lowest level of female political representation in the world at three percent, compared to the global average of 20 percent.

Furthermore, violence against women is endemic and they are poorly represented in formal employment. Papua New Guinea (PNG) has a gender inequality index of 0.617 and Tonga 0.462, in contrast to the most gender equal nation of Norway at 0.065.

The declaration is a sign of greater recognition by the male political elite of the critical role women have to play in achieving better human development outcomes across the region.

National leaders have committed to reforms, such as adopting enabling measures for women’s participation in governance and decision-making at all levels, improving their access to employment and better pay, and supporting female entrepreneurs with financial services and training. They have also promised to deliver improved legislative protection against gender-based violence and support services to women who have suffered abuse.

“What is significant about the declaration is that leaders have taken it on board as a priority and I believe our leader took it seriously and followed it through with a law change in Samoa,” Fiame Naomi Mata’afa, Samoa’s minister of justice and veteran female parliamentarian, told IPS.

Last year a law was passed in Samoa reserving 10 percent, or five of a total of 49 seats in parliament for women.

“It is a significant step in that it provides a ‘floor’ as opposed to a ‘ceiling’ and there will never be less than five women in any future parliament,” she continued. “It is important that women are in parliament to be seen and heard and to serve as evidence that it can be done.”

Contributing factors include entrenched expectations of a woman’s place in the domestic sphere, low endorsement from political parties and the greater difficulties women have in accessing funding and resources for election campaigning.

There has been incremental progress in other countries with last year witnessing the first female elected into the parliament of Nauru -the smallest state in the South Pacific – in three decades, and three women winning seats in the Cook Islands national election this July.

Women’s participation in local level governance received a boost in Tuvalu after the government passed a law requiring female representation in local councils. Blandine Boulekone, president of the Vanuatu National Council of Women, noted that women gained five of a total of 17 seats in the Municipal Elections held in the capital, Port Vila, in January.

Gender parity in education, necessary for improving women’s status in all areas of life, has, according to national statistics, been achieved in most Pacific Island states, except PNG, Tonga and Solomon Islands, with girls outperforming boys at the secondary level in Samoa and Fiji.

Nevertheless, the Pacific Islands Forum reported last year that “higher education for young women does not necessarily lead to better employment outcomes due to gender barriers in labour markets”, with most countries reporting less than 50 percent of women in non-agricultural waged jobs.

Last year Samoa passed legislation against sexual harassment and discrimination in the workplace, while similar draft legislation is being developed in Kiribati, Vanuatu and Tonga.

Pratt also claims there has been good progress with “the enactment of domestic violence legislation in Palau, Samoa, Tonga, Kiribati and Solomon Islands.” Last year domestic violence also became a criminal offence in PNG following the passing of the Family Protection Bill.

Sixty to 75 percent of women in the region experience family and intimate partner violence. Their vulnerability is exacerbated by early marriage, the practice of ‘bride price’, low levels of financial independence and women’s inadequate access to justice systems.

However, Shamima Ali, coordinator of the Fiji Women’s Crisis Centre, commented, “As practitioners on the ground, we can say that while all these policies and legislations look great on paper, the implementation is another matter.”

“One also needs to invest financially to ensure new legislation and policies are effective.”

Fiji has had a domestic violence decree since 2009, but Ali said, “While most magistrates and judges deal well and follow the new decrees, there are many who still display traditional entrenched views regarding rape and domestic violence and often injustice is meted out to survivors, particularly for ‘sex crimes’.”

Law enforcement is a great challenge, too, especially in rural communities.

“Women, girls and children in rural and maritime areas have little recourse to justice for crimes of violence committed against them due to lack of police presence and resources in these areas,” she said.

Pratt agrees that the road to real change in the lives of ordinary Pacific women is a long one.

“The declaration is still new and there is a need for more awareness, advocacy and accountability toward meeting the goals,” she emphasised.