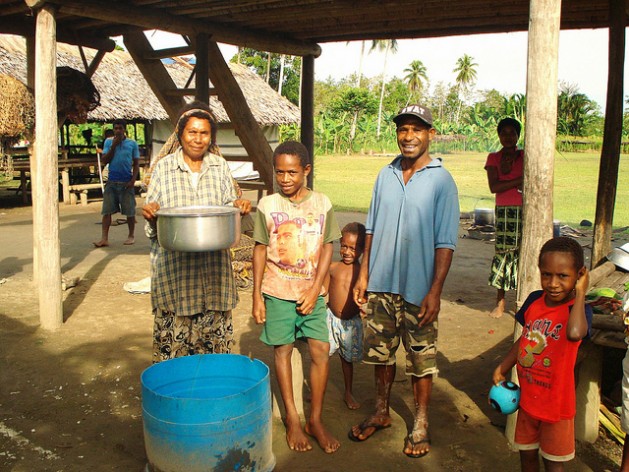 SYDNEY, Jul 28 2014 (IPS) - New legislation recently passed in the southwest Pacific Island state of Papua New Guinea (PNG) outlawing polygamy has been welcomed by experts in the country as an initial step forward in the battle against high rates of domestic violence, gender inequality and the spread of AIDS.

“If polygamy remained acceptable, wives would never speak for their rights and they and their children would continue to be silent victims of violence,” Dora Kegemo and Dixie Hoffman of the Women and Children’s Access to Community Justice Programme in Goroka, Eastern Highlands, told IPS. “So banning polygamy under this new law will help to empower women.”

The Civil Registration Amendment Bill makes it compulsory to register all marriages, including customary ones. Marriages involving more than one spouse, however, will not be recognised. The government believes this move will also help to increase the registration of births in a country where an estimated 90 percent of the population do not have birth certificates.

Formal identification of children is urgently needed to begin improving a range of human rights and child protection issues in PNG, such as child labour and trafficking. It is estimated that children make up about 19 percent of the labour force here. Two years ago, a study in the capital, Port Moresby, by the International Labour Organisation (ILO), revealed that 43 percent of children surveyed were engaged in commercial sexual exploitation.

Until the law was passed, customary marriages, including polygamous ones, which are common in rural areas, were not officially recorded. Polygamy is particularly prevalent in the mountainous highlands region where men have traditionally taken up to five or six wives in order to increase agricultural productivity and better manage the domestic responsibilities of large extended families. Studies over the past decade suggest that an estimated 25 percent of unions in the highlands are polygamous.

But Jack Urame, director of the Melanesian Institute in the Eastern Highlands, who personally supports the government’s move to ban polygamy, says that its practice today has changed under the influence of the cash economy and western notions of commodity wealth.

In the past, “only the big men or the leaders and those who had the economic strength to take care of the women would have many wives,” he explained. But now the practice is prone to greater abuse when men use cash to acquire multiple wives as a means of displaying monetary wealth.

These marriages do not last, Urame said, and when they break down children are affected. “Many children who come from such broken marriages are disadvantaged and this contributes to the many social problems [we face].”

Domestic and gender violence affects up to 75 percent of women and children in this island state and is associated with adultery, financial problems, alcohol abuse and polygamy. Many cases involve the abuse and neglect of wives, as well as children, when a husband enters into further relationships.

Following a visit to the country in 2012, Rashida Manjoo, United Nations Special Rapporteur on violence against women, reported that “the practice of polygamy also creates tension between women within the same family and has led to cases of violence, sometimes resulting in murder of the husband or additional wife or girlfriend.”

Concerns have also been raised about the impact of polygamy on the spread of HIV/AIDS. While no specific study has been conducted on connections between polygamy and the disease, Peter Bire, director of the National AIDS Council, highlighted that high-risk behaviours could not be ignored.

“What we know is that multiple and concurrent sexual partnerships, in a context of low and inconsistent condom use, are important contributing factors,” he told IPS.

Another factor is that “sex outside of polygamous marriages is common and, because of the gender inequality problem in PNG, it is usually the husbands who can be blamed for being unfaithful,” he stated, adding that promiscuity puts wives at a high risk of contracting the virus.

The national HIV prevalence in people aged 15-49 years is estimated at 0.8 percent of the population, rising to 0.91 percent in the highlands region. HIV-positive cases in the country increased from 3,446 to 31,609 in the decade to 2010 with men comprising 37 percent and women 61 percent.

Bire said that, while the country’s HIV/AIDS Management and Prevention Act criminalises the intentional transmission of HIV, more comprehensive human rights laws, especially ones to better protect women, are needed to help fight the disease.

But “as with many laws and policies in PNG, implementation remains a challenge,” he continued.

In rural areas, where more than 80 percent of the population live, geographical barriers, such as dense rainforest and rugged mountains, as well as wider corruption, are factors in the limited development of the country’s infrastructure and outreach of government services, including law enforcement.

Despite these hurdles, many are hopeful that small steps like the recent polygamy law will eventually bring a better deal for women.