Komala Ramachandra is a senior business and human rights researcher and Juliane Kippenberg is associate children’s rights director, both at Human Rights Watch 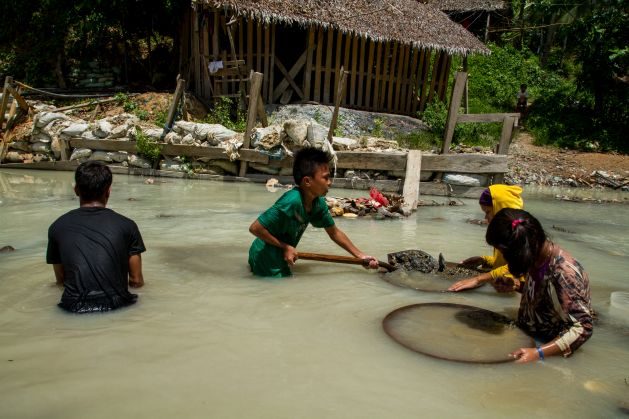 WASHINGTON DC, Dec 11 2019 (IPS) - Millions of adults and children around the world suffer abuses as workers who obtain raw materials, toil on farms, and make products for the global market. They are at the bottom of global supply chains, for everything from everyday goods like vegetables and seafood to luxury items like jewelry and designer clothing that end up on store shelves worldwide.

“Ruth,” age 13, is one of them. We met her processing gold by mixing toxic mercury with her bare hands into ground-up gold ore near a mine, during our research in the Philippines. She told us that she had  been working since she was 9, after dropping out of school, though she often doesn’t get paid by the man who gave her bags of gold ore to process.

It’s dangerous being on the lowest rung of this global ladder. In 2013, over 1,100 workers died and 2,000 were injured when the Rana Plaza building, which housed five garment factories, collapsed in Dhaka, Bangladesh.

Since then, some progress has been made in making factories safer in Bangladesh, but there have not yet been sustainable reforms there or in other countries. To keep up with the demands of consumers, women experience a range of labor abuses in Bangladesh and elsewhere.

In January 2019, the Brumadinho tailings dam in Brazil collapsed, killing at least 250 people—mostly workers—and unleashed a wave of toxic sludge. The dam had collected waste from a mine extracting iron ore, which is used globally in construction, engineering, automotive, and other industries.

In December 2019, more than 40 people, mostly workers, died in a factory fire in India’s capital, Delhi. Workers were asleep inside the factory, which makes school bags, when the fire erupted.

The era in which voluntary initiatives were the only way to encourage companies to respect human rights is starting to give way to the recognition that new, legally enforceable laws are needed. Although the debates vary by country, the overall trend is promising for the workers and communities that are part of multinational corporate supply chains.

Increasingly, lawmakers are acknowledging that companies need to take human rights—including freedom from unsafe working conditions, forced labor, and wage theft—into account, and are writing laws that require them to do so.

And governments aligned with powerful companies have frequently failed to regulate corporate activity, or have not enforced and even eliminated existing protections for workers, consumers, and the environment.

The UN Guiding Principles on Business and Human Rights provide voluntary guidelines for companies on their human rights responsibilities, but they aren’t enforceable. Industry-driven voluntary standards and certification schemes, which have grown rapidly in recent years, can be useful, but are not sufficient: many companies will only act when they are required to do so by law.

These standards also don’t cover key human rights and environmental issues in companies’ supply chains, and the systems for monitoring compliance with the standards haven’t always been able to catch and rectify problems.

Both the Rana Plaza factory and the Brumadinho dam had been inspected by auditors hired by the companies just months before disaster struck.

In recent years, France, the Netherlands, Australia, and the UK have passed laws on corporate human rights abuses. But some of the existing laws don’t have any teeth. Australia and the UK, for example, merely require companies to be transparent about their supply chains and report any actions they may have taken to address issues like forced or child labor, but do not actually require them to prevent or remedy these issues. Furthermore, neither country has penalties  for companies that don’t comply with the law.

France’s 2017 law is the broadest and most rigorous regulation currently in effect, requiring companies to identify and prevent both human rights and environmental impacts in their supply chains, including the companies they control directly and those with which they work.

Companies in France published the first “vigilance plans” under this law in 2018. Failure to comply can result in lawsuits, and the first legal action under the duty of vigilance law was filed in October 2019.

Laws like the one in France, with requirements for company action, consequences when they fail to follow through, and a way for workers to hold companies accountable, open the door for greater protections for workers around the world.

The year 2020 promises more progress for more people. Parliaments in Germany, Switzerland, Denmark, Canada, Norway, Finland, and Austria are considering laws that would change the way that companies deal with human rights in their global operations, going beyond transparency and reporting to requirements to identify human rights risks in corporate supply chains and to take steps to prevent them.

In a related development, the International Labour Organization is considering whether a new binding global convention on “decent work in global supply chains” is needed, and will hold a meeting with government, trade union, and employer representatives in 2020 to explore this question.

By adopting robust supply chain regulation, countries will create a new international expectation for responsible behavior for businesses, and more rigorous human rights safeguards for millions of workers, like Ruth, who struggle to survive in their mines, factories, and fields.