Teddy Cotella stands in front of the solar panels he installed in 2018 on his farm in an area of scarce infrastructure and far from the power grid, in the Argentine province of Santiago del Estero. To get electricity, he used to use generators that consumed about 20,000 litres of diesel fuel annually. CREDIT: Courtesy of Teddy Cotella

BUENOS AIRES, Jun 10 2020 (IPS) - Rice farmers in the Argentine province of Entre Rios often look like mechanics. “They’re always full of grease, because they haul diesel fuel around all the time, for their water pumps,” says local farmer Arturo Deymonnaz. He, however, doesn’t have that problem, because he uses solar energy to grow his rice.

Deymonnaz’s farm is located outside the town of Villa Elisa, in east-central Argentina, near one of the bridges that crosses into Uruguay. He’s a lifelong livestock producer – like his father and grandfather – but in 2018 he ventured into rice production, tempted by an agronomist who assured him it could be grown using clean energy.

“This is traditionally a rice-producing area, but many have stopped growing it because so much money is spent on fuel that it is no longer profitable. Here, rice is planted in November and harvested in April. That’s 100 days with the pumps running 24 hours a day to draw water from the wells for the rice,” he tells IPS.

But Deymonnaz says it’s profitable for him to grow rice, thanks to the fact that he draws water from a 48-metre-deep well using two pumps fueled by 36 solar panels on his 300-hectare farm, 10 of which he now dedicates to planting rice.

“I call it my solar rice farm. I don’t spend money on fuel and I don’t have to put up with the noise or the steam produced by the motor,” says the farmer, who also installed a system of plastic sleeves with sluices to reduce the high water consumption of his rice crop. He estimates that with this system he uses at least 30 percent less water.

Deymonnaz is representative of a phenomenon that is growing in this Southern Cone country of 44 million people, which is the third largest economy in Latin America and where agriculture accounts for 13 percent of GDP.

According to the latest National Agricultural Census conducted here in 2018, of the 162,650 rural establishments that use some type of energy, 25,850 have solar panels.

The water pumps used in rice farming are very powerful, which means they cannot rely on conventional electrical connections. Even farms connected to the grid have to use generators that run on diesel fuel. 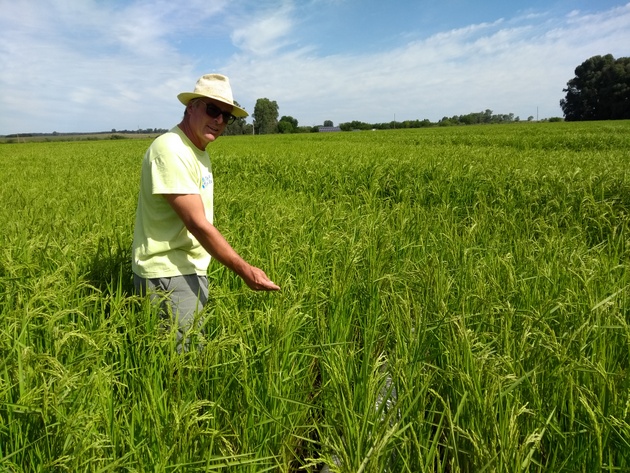 Arturo Deymonnaz is the third generation of his family dedicated to livestock farming. But two years ago he began growing rice, which he produces solely with solar energy, in northern Argentina. Rice growers in the area use high-powered pumps to extract from wells the enormous amount of water required to grow the crop, which previously were fueled by huge amounts of diesel fuel. CREDIT: Courtesy of Héctor Pirchi

“In Entre Rios, the cost of fuel is driving small-scale farmers out of business. We used to have about 100,000 hectares of rice, but last year only half of that was planted. That’s why solar energy is a solution,” Héctor Pirchi, an expert on rice at the National Institute of Agricultural Technology (INTA), told IPS.

But the use of solar energy is not limited to Entre Ríos: it is spreading through rural areas all around the country.

Due to the lockdown in place in Argentina since March because of the COVID-19 pandemic, IPS interviewed several farmers, solar energy entrepreneurs and experts in different provinces by phone from Buenos Aires.

Teddy Cotella, who grows soybeans, corn, wheat and chickpeas in northern Argentina, is fascinated by solar energy. His 3,000-hectare farm in the province of Santiago del Estero is 12 km from the power grid, so for almost 20 years he used generators.

“I used to use about 20,000 litres of diesel a year for electricity generation alone. To people who complain about their power company bill, I tell them ‘try not having electric service at all’,” he says.

In 2018 Cotella installed solar panels along with lithium batteries, which store electricity for the nighttime or rainy days. These provide electric power for all three houses and for production on the farm.

“People whose farms are located far from the grid shouldn’t hesitate. I would also put solar panels on a house in the city,” says Cotella, who adds that the investment in solar panels is recovered in just three years. 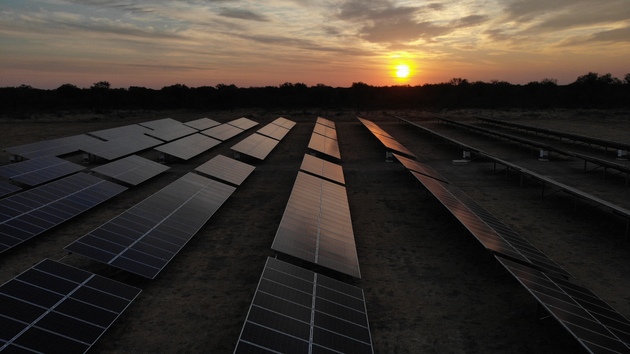 Agritur is a 9,000-hectare agricultural establishment in the central Argentine province of San Luis where 1,800 solar panels were installed in 2019, producing 600 kilowatts of energy and providing half of the farm’s electricity. All the crops are grown using an irrigation system, because rainfall amounts to just 500 mm a year. CREDIT: MWh Solar

Northern Argentina mainly falls within the Chaco ecosystem, a vast semi-arid plain covered in shrubs and hardwood forest that extends into Bolivia and Paraguay. This region is home to Argentina’s poorest provinces and infrastructure is scarce, so small solar parks change lives.

Ariel Ludueña owns Ener One, a renewable energy company that since 2017 has installed some 2,500 solar panels in northern Argentina.

“I am sure that solar energy will continue to grow, especially in that area, because it gives farmers independence. There are farms that are 80 km from the grid, along bad roads over which it is not easy to transport fuel,” says Ludueña from the western province of Córdoba.

One of Ludueña’s customers is Ignacio Pisani, an agricultural production engineer who moved from Buenos Aires to the northwestern province of Salta 30 years ago to devote himself to farming.

Pisani’s farm is 15 km from the grid, and when he asked the provincial authorities to extend it, they said he had to pay the cost, which was a disproportionate investment for a small farmer.

So Pisani used a generator not only to provide electricity for his house and his workers’ houses, but also to pump water for his cows and for the drip irrigation system he uses to grow onions, watermelon and alfalfa on his 1,500-hectare farm. In this part of the Chaco, rain is scarce and is concentrated in the southern hemisphere summer months. 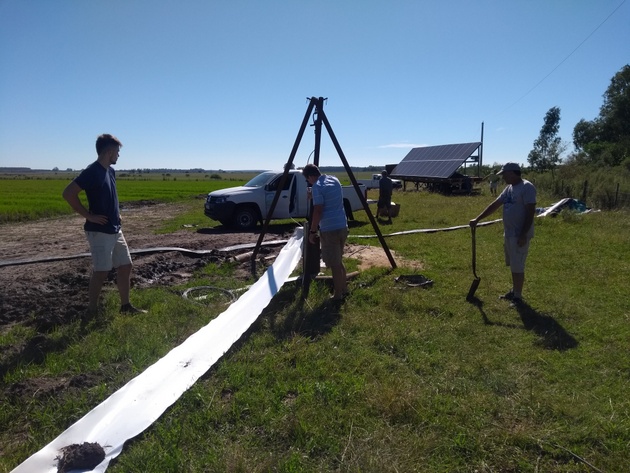 The solar panels seen in the background power the pump that extracts water from this well to grow rice on the Colonia Mabragaña farm in the Argentine province of Entre Ríos. Rice consumes enormous quantities of water, but on this farm a system of plastic sleeves with sluices reduces the crop’s water consumption by at least 30 percent. CREDIT: Courtesy of Héctor Pirchi

“The generator was giving me a lot of problems: high fuel consumption, noise, the need to buy spare parts… And I could see that the power grid was never going to arrive. That’s why I decided in 2018 to install a solar park with 50 panels that would cover all my needs,” says Pisani.

The farmer financed the project with his own capital, after realising that in Argentina the politically correct rhetoric in favour of renewable energy rarely translates into concrete financial support.

“I turned to all the public and private entities in search of support, but nobody helped me,” says Pisani, who along with the panels has 16 batteries that allow him to guarantee electric supply for up to three days in case the weather is rainy or cloudy.

The outlook seems even more uncertain for large agricultural establishments, which are key players in Argentina’s foreign trade. According to official figures, agribusiness products accounted for 42.6 percent of Argentina’s total exports in 2019.

“Solar technology is constantly evolving and cost reduction makes it one of the most competitive, clean and efficient technologies for agribusiness establishments,” says renewable energy economist Matías Irigoyen from Buenos Aires.

“Although its implementation at the national level will depend on the energy policies that are adopted, it is already the most convenient solution in several provinces,” adds Irigoyen, who is also a partner the MWh Solar company.

The farm is a large consumer of electricity that buys energy directly from the wholesale market, and since last year has been covering half of its demand with solar energy.

“In addition to the fact that agribusiness companies can benefit economically from renewable energies, the interesting thing is that they can also access new international markets, due to the growing demand for products with a smaller carbon footprint,” says Irigoyen.