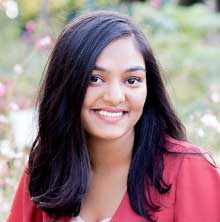 Riya Sinha, 19 has been an activist for women since her early teens. Credit: Fuzia

Fuzia (https://www.fuzia.com/) was the brainchild of 19-year-old Riya Sinha and co-founder and director Shraddha Varma, 31. They developed their signature brand, “Happiness is Fuzia”, from their shared experiences of discriminatory practices that women and girls experience throughout the world.

“As I have worked on Fuzia, I think my background played a big part in forming my vision for Fuzia. From a young age, I have had the privilege to be able to travel to India and all around the world, experiencing different cultures and types of people. It helped me to create an awareness of my privilege and how life differed in many parts of the world,” Sinha said in an exclusive interview with Inter Press Service (IPS).

The sisterhood is rooted in the fifth Sustainable Development Goal (SDG), which aims to end all forms of discrimination, violence, harmful practices for women. Fuzia seeks to achieve the goal in which enabling technology, especially information and communication, is used to promote women empowerment.

What makes this community different is its belief in yet-to-become-successful women. The founders translate this belief by giving them a platform to showcase their talents. Young photographers, artists, creative and opinion writers, bloggers, and crafters log on and place their bright and distinctive works on the Fuzia website. The website is a conduit to robust debates on significant issues like Black Lives Matter with moving artistic tributes to, for example, a nurse in the time of Covid-19 competing for the audiences’ attention.

Fuziaite of the Week celebrates the most compelling content of that week. Recently, that honor went to a 59-year-old teacher and writer who blogs about her life experiences on the site. She, like many, finds this platform allows her distinctive and exciting voice to shine in a world where it could typically be blurred out. 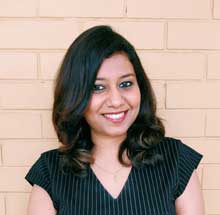 Shraddha Verma, 31 sees Fuzia as an inclusive platform where women can interact in a non-judgmental and safe space. Credit: Fuzia

Fuzia has been a lifeline for many during the COVID-19 pandemic supporting, empowering, and voicing concerns over domestic violence, coping mechanisms, work-from-home dos and dont’s, and depression and anxiety management. The website and social media platform focused on mental health, physical well-being, and freedom of expression.

Fuzia also fosters women empowerment in the form of job hunting, linking up applicants with proper channels. It arranges periodic competitions, writing and art contests, technology workshops and forums, and live talks from women leaders. It gives women of color a step-up on their career tracks. One success story, Humaira Ferdous from Bangladesh, told IPS about how publishing her work on Fuzia led to her employment within the organization.

“I believe that the more you praise and celebrate life, the more there is in life to celebrate. Fuzia helped me celebrate life to the fullest. I work here as a Graphic Designer now, but it feels like only yesterday when I couldn’t even think of being on this pedestal,” Ferdous says.

Sinha, who has been an activist since her early teens, says she could notice the sexism and inequalities that women faced in their communities where their free will and even thought processes are governed and guarded. Women and young girls from many South Asian countries at times feel suffocated and have no scope to express their voices, she says.

As young entrepreneurs, both Sinha and Varma sought out a solution. They came up with a concept that harnessed the accessibility of the internet, social media, and smartphones and connected the dots with technology.

Surveys show that 90% of teens aged 13-17 use social media. About 75% report having at least one active social media profile, and 51% report visiting a social media site at least daily. Two-thirds of teens have their own mobile devices with internet capabilities. Nowadays, for most countries, even from remote areas, getting access to the internet and social media is considered standard practice.

These women now have an online platform that is inherently inclusive and welcoming. On Fuzia, anyone can post her views, opinion, creative works, and voices safely and securely. The platform allows women to express themselves freely to a global audience in a judgment-free zone. The users are mainly from India, Bangladesh, Pakistan, and Indonesia, and much of its content represents women of South Asian descent.

Fuzia maintains an active presence over Facebook, Instagram, Twitter, website, and more with subcategories and pages. Initially, in the first year, they gathered more than 1 million supporters, and since then, growth traffic has increased by up to 35-45% each month.

There are no age brackets or geographical location barriers in Fuzia. Anyone can become a user and get their voices heard. Here the users come from various professions, age brackets, and backgrounds. Each contributes, engages, and helps each other as a friend and fellow user. A massive chain of skillful contributors, professionals, and industry movers and shakers are included in an engaging and unified platform. Fuzia empowers women daily by blurring social classes and status—it’s a platform where everyone is a friend and a sister within a massive network.

The authentic and remarkable way Fuzia stands in solidarity with women is key to its success. It provides work-life balance write-ups, has workshops for job readiness in which the values of mutual respect, work ethic, and environmental consciousness are emphasized.

Other platforms include mental health workshops, book clubs, and new releases of books and movies, discussions on current political and global issues, including societal norms, and much more.

Fuzia also has extended its wings to helping and uplifting people regardless of their color and gender. The website supports the LGBTQ community and provides a safe space for them to voice their concerns and seek help. It welcomes people with different gender identities, including male, female, transgender, gender-neutral, non-binary, agender, pangender, genderqueer, two-spirit, third gender, and all, none or a combination of these.

Varma says Fuzia aims to challenge the mindset which forces women into subservient roles and mentions, “I have been brought up in a society where I have noticed a lot of stereotypical mindsets about a woman- how a woman should be, or what she should do. Societal and cultural restrictions have always led to women taking a backseat in everything, and in general, they have lacked the deserved opportunities. And, I think that Fuzia can help by empowering women to share their stories and stand together, giving them confidence in their voice and skill, and help in economic, social, and political liberation and understanding.”

It can be expected that this platform will spark a change in the young people’s mindsets as it is vital to bring people together on a common platform where they could realize their true potential, where they could start believing in themselves, and where they’re accepted.