IPS senior correspondent Stella Paul interviews Nobel Laureate KAILASH SATYARTHI on the eve of Fair Share for Children Summit, a global virtual conference in which Nobel Laureates and world leaders are calling for the world's most marginalised children to be protected against the impacts of COVID-19. 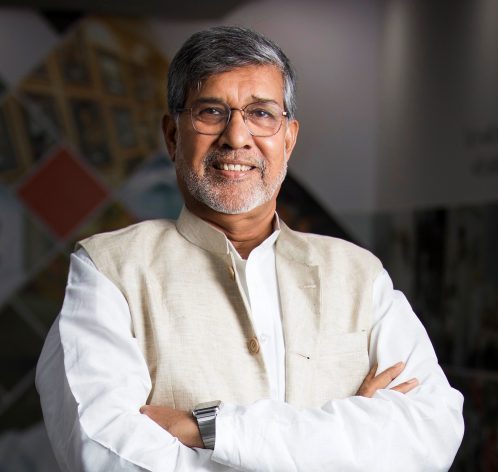 Nobel Laureate Kailash Satyarthi said that without prioritising children we could lose an entire generation as evidence mounts that the number of child labourers, child marriages, school dropouts and child slaves has increased as the COVID-19 pandemic spread across the globe. Courtesy: Kailash Satyarthi Children's Foundation

HYDERABAD, India, Sep 8 2020 (IPS) - Nobel Laureate Kailash Satyarthi warns of the danger that over one million children could die, not because of the COVID-19 pandemic, but because of the economic crisis facing their families.

In an exclusive interview with IPS, Satyarthi said that without prioritising children we could lose an entire generation as evidence mounts that the number of child labourers, child marriages, school dropouts and child slaves has increased as the COVID-19 pandemic spread across the globe.

He candidly noted that the most marginalised and vulnerable children in the world are still not prioritised by governments and policies and that the political will and urgency of action was simply not there to offer them protection.

Satyarthi is undoubtedly one of the greatest child rights’ crusaders of our time. Founder of Bachpan Bachao Andolan (Save Childhood Movement) – India’s largest movement for the protection of children and centred around ending bonded and labour and human trafficking, Satyarthi has been relentlessly working to protect the rights of children for over four decades. Save Childhood Movement has rescued almost 100,000 children from servitude and bonded labour, re-integrating them into society and aiding them in resuming their education.

IPS interviews Satyarthi on the eve of Fair Share for Children Summit, a global virtual conference, hosted by Laureates and Leaders for Children – also founded by Satyarthi. The summit, which takes place from Sept. 9-10, brings together Nobel laureates, including the Dalai Lama, Tawakkol Karman, Professor Jody Williams and leading international figures and heads of United Nations agencies to demand a fair share for the world’s most marginalised children during and beyond COVID-19.

The pandemic has gravely endangered millions of children around the globe, and it is not just a moral obligation but also a practical step to protect these children, Satyarthi says.

He also elaborates what could be a fair share of the global pandemic recovery package for the children and how this could be managed. Excerpts follow:

IPS: Where does the world stand today in ensuring child rights? Which are the areas where we have clear progress, and where are we still failing?

Kailash Satyarthi (KS): I would be very blunt to say that the most marginalised and vulnerable children in the world are still not prioritised in the policies and fund allocations and spending on them. Protection of children needs a lot of political will and a lot of urgency and action which was not there. But I would agree that we have been making progress, slowly but surely, we are trying to protect our children in different areas. There is clear evidence that the number of child labourers has decreased over the last 20 years or so, the number of out-of-school children has also dropped considerably. Similarly, we made progress in the field of malnutrition. So, there were many areas we made progress. But as I said before, we require a tremendous amount of political will and action to protect our children.

IPS: How has the COVID pandemic endangered lives of children across the world?

KS: Well, before the pandemic, we had several problems in relation to safety, education, health and freedom of children. And since these children belong to the most marginalised sector of society – they are children of unorganised workers, peasants, farmers, they are children of indigenous peoples and children belonging to refugee communities. So, they were already suffering, injustice was there, inequality was there, but COVID-19 has exacerbated that inequality and injustice, and we see the worst effect is on children.

Though there is no direct infection or disease, the indirect effect is alarming, and that has to be addressed now. It is very clear that if we do not take urgent action now, then we risk losing the entire generation. It is evident and eminent from all sources that the number of child labourers, the number of child marriages, school dropouts, the number of child slaves, even children engaged in petty crimes – these will increase.

So, we have to underline these factors which are impacting the lives of children and their families, of course. And we have to be extremely vigilant and active about it. So, that sense of moral responsibility and political responsibility should be generated and educated.

I also think that this crisis is the crisis of civilisations. We were thinking that since everybody is facing the same problem, the pandemic would be an equaliser. But instead of being an equaliser, it has become a divider. Divisive forces are quite active in society, and equality and injustice are growing in the children. So, first of all, as an individual and a concerned citizen, one should generate compassion. IPS: The government stimulus package is expected to provide employment and help in economic recovery. Is it feasible to use this specifically for child development and child protection?

KS: It is not only feasible, it is necessary. We cannot protect humanity and ethos of equality and justice until and unless we address the problems of the most marginalised children and people of the world.

I am quite supportive of the government stimulus package, which is $9 trillion so far. I will give you an example – the stimulus is prioritised to bail out their own companies. Most of the developed countries are putting up stimulus to bail out their own economy, their banks, financial institutions and companies. In the United States, some companies have all-time high stock market situations.

On the other hand, we have a danger that over a million children will die – not because of COVID-19 pandemic, but because of the economic crisis, their parents are facing. So, this is injustice. How can you justify this? You need a stimulation package to bailout [the] economy, but you need a stimulation package to ensure that our children are protected. So, this is not just a moral question but also a very practical issue.

This is why in May earlier this year, I joined 88 Nobel Laureates and global leaders to sign a joint statement demanding that 20 percent of the COVID-19 response be allocated to the most marginalised children and their families. This is the minimum fair share for children.

IPS:  The theme of the summit is #FairShare4Children. What would be considered a fair share of the estimated $9 trillion set aside globally to mitigate the effects of the pandemic? Where are the most critical areas? And how should it be managed?

KS: Even if you only look at the $5 trillion packages announced in the first few weeks of the pandemic, 20 precent of that is $1 trillion – enough funding to fund all the COVID-19 U.N. appeals, cancel two years of debt for low-income countries, provide the external funding required for two years of the Sustainable Development Goals on Education and Water and Sanitation and a full ten years of the external funding for the health-related SDGs.

Within the estimated $9 trillion of governments’ aid, this would mean $1 trillion (for children). This funding would mitigate the increase child hunger and food insecurity, tackle the increase in child labour and slavery, the denial of education and the heightened vulnerability of children on the move such as child refugees and displaced children. These are the areas of immediate criticality.

Some key demands to this end include – for one, the declaration of COVID vaccines as a global common good so that it is made available for free for the most marginalised communities. Secondly, the creation of a Global Social Protection Fund to provide a financial safety net to the poorest communities in lower and lower-middle income countries. Thirdly, all governments should cancel the debt of poor countries to allow them to redirect funds towards social protection. Lastly, governments should establish legislation to ensure due diligence and transparency for business and ensure its strict compliance to prevent the engagement of child labour and slavery in the global supply chains.

If we can prevent the devastating impact of COVID-19 on these areas in the present, if we can reduce the inequality in the world’s COVID-19 response, if we ensure the most vulnerable receive their Fair Share to we can then be in a position to salvage the future of our children.