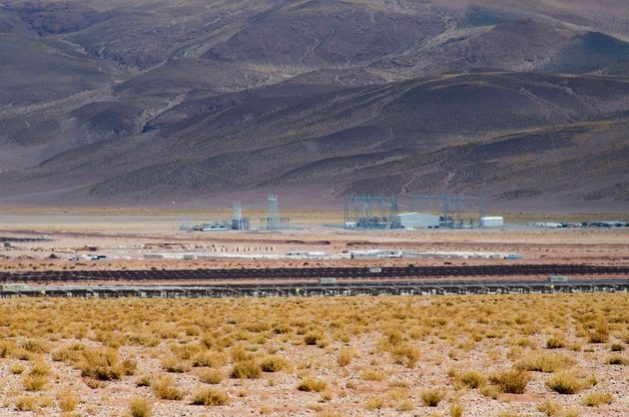 In the background can be seen the gigantic Cauchari Solar Park and in the foreground are tolas, typical drought-resistant shrubs of the Puna highland plateau. The largest plant of its kind in operation in South America is in the middle of nowhere, a few kilometres from the Kolla community of Puesto Sey, where there are now 962,496 solar panels. CREDIT: Cauchari Solar

BUENOS AIRES, Dec 10 2020 (IPS) - The unprecedented growth of renewable energies in Argentina over the last three years has borne its greatest fruit: the Cauchari solar park, with nearly one million photovoltaic panels and 300 MW of installed power, which was connected to the national power grid on Sept. 26.

The solar park is located in the extreme northwest province of Jujuy some 1,700 km from Buenos Aires, near the borders with Chile and Bolivia, with whom it shares the Puna ecoregion of high Andean plains covered by grasses and shrubs.

The initiative cost 390 million dollars and is the latest reflection of China’s involvement in the Latin American economy: not only the two construction companies but also most of the financing came from the Asian giant.

"It is the largest operating solar park in South America and we consider it a great boost for changing the energy mix in the entire region…It is still too early to say, because we are in a stage of adjustment and depend on natural phenomena, but it is likely to be one of the most efficient solar parks in the world." -- Guillermo Hoerth

An indigenous shepherd tending his llamas or a herd of wild vicuñas that flee as soon as they see a vehicle approaching are the only sights that attract the visitor’s attention – as IPS found on a recent visit to the area – in the solitude of the arid Cauchari environment, which covers some 800 hectares in the Argentine Puna, at an altitude of more than 4,000 metres.

Between September 2018 and October 2019, 2,664 trucks with containers loaded with Chinese components and technology arrived at this remote spot so far from the large centres of electricity consumption, where water is scarce and it is hard to breathe because of the altitude.

Previously they had disembarked in the Chilean port of Antofagasta, on the Pacific Ocean, or in the Argentinean port of Zarate, on the Atlantic.

“It is the largest operating solar park in South America and we consider it a great boost for changing the energy mix in the entire region,” Guillermo Hoerth, president of Cauchari Solar, a company owned by Jujuy province, told IPS by phone.

“It is still too early to say, because we are in a stage of adjustment and depend on natural phenomena, but it is likely to be one of the most efficient solar parks in the world,” Hoerth added.

The president of the plant explained that the intense solar radiation throughout the year is combined with low temperatures, which help the panels retain heat and make the Puna an extraordinary place for this type of renewable energy.

Cauchari is the greatest success story of the Law of National Promotion of the use of Renewable Energies for the Production of Electric Power, passed by Congress in September 2015.

The new law modified the electric mix of this Southern Cone country, which is the third-largest economy in Latin America, built until then almost exclusively by oil, natural gas, large hydroelectric dams and, to a much lesser extent, nuclear energy.

According to official data, 135 new renewable energy projects, mostly solar and wind, have been launched in Argentina since 2016. The ones already in operation and those that are still under construction represent a combined total of 4,776 MW of installed power, with an estimated investment of close to 7.2 billion dollars. The entrance to Cauchari Solar Park is reached by a desolate dirt road about 40 kilometres long that connects to paved highway 52, which in the northern province of Jujuy leads to the Chilean border. Technically there are three solar parks, to get around the 100 MW limit set by the tender. CREDIT: Daniel Gutman/IPS

The most graphic reflection of the rise in renewable sources, which under the law have priority over conventional sources, is that they accounted for 9.1 percent of the electricity consumed in Argentina in the first 10 months of 2020 and climbed to a record 11.9 percent in October. Although it must be kept in mind that this occurred in a context of falling electricity consumption due to the drop in economic activity as a result of the COVID-19 pandemic.

Thus, renewable sources, which until three years ago represented less than two percent of electricity generation in Argentina, reached – with a slight delay – the goal of contributing eight percent of electric power, which Law 27191 of 2015 had set for Dec. 31, 2017.

The law outlines a second stage of the plan, with a goal of reaching 20 percent by 2025. But experts believe this will be virtually impossible to achieve.

The global economic crisis and Argentina’s financing problems – this year the country restructured almost 66 billion dollars of debt with private creditors and still owes some 52 billion dollars to the IMF – are major obstacles.

But they are not the only ones.

“Argentina is a large country, with great potential for solar energy in the north and wind energy in the south,” economist Julián Rojo of the General Mosconi Argentine Institute of Energy, a non-governmental research organisation, told IPS.

But “the problem is that for transporting electricity to the centres of consumption there is a lack of high voltage lines, which today are close to saturation. And there is no intention of investing in new ones,” he said in a telephone conversation. An engineer oversees the installation of the panels during the construction of the solar park, which involved the arrival of more than 2,600 trucks carrying Chinese technology to a remote area in the Puna high mountain plateau in the northwest of Argentina. CREDIT: Daniel Gutman/IPS

In Rojo’s view, Argentina does not currently need additional electricity generation, because peak demand was reached in 2017 and, if necessary, the country has an important gas pipeline network that makes it more convenient to build thermal power plants near the centres of consumption.

Marcelo Nieder, director of renewable energy in Jujuy province, told IPS that such a remote location was chosen to build the Cauchari solar park not only because of the excellent solar radiation in the Puna ecoregion, but also because a high-voltage line built in 1999 to export electricity to Chile passes through the area.

“Chile used it to supply its mining industry, but since 2006 Argentina stopped selling to Chile, so there was a possibility to take advantage of the power line,” he explained by phone from Jujuy, also the name of the provincial capital.

Because this high voltage line still has transport capacity the governor of Jujuy, Gerardo Morales, visited Cauchari in October to make an offering to the Pacha Mama – Mother Earth for the indigenous people of the Andean region – and to ask for an expansion of the solar park, up to 500 MW of power.

“We have already designed the expansion and we are betting that China will finance it, as in the case of the park that was already inaugurated,” Felipe Albornoz, president of Jujuy Energía y Minería Sociedad del Estado (JEMSE), the state-run energy and mining company that manages Cauchari, told IPS by phone from the provincial capital.

China’s state-owned Eximbank financed most of the construction, with a 330 million dollar loan that the province of Jujuy must pay back over 30 years, at an annual interest rate of 2.9 percent.

The remaining 60 million dollars were obtained through a green bond issued in the United States, for which the province of Jujuy is trying to postpone the maturity date, according to Albornoz. Signs in Spanish and Chinese are an unexpected sight in the middle of the untamed landscape of Argentina’s Puna high mountain plateau and are a reflection of China’s heavy involvement in the development of solar power in Latin America. CREDIT: Daniel Gutman/IPS

The president of JEMSE explained that Jujuy expects to sell power to the national electricity market for about 25 million dollars a year. The company projects that Cauchari will produce 840,000 MW/hour per year, which would save the emission of 325,000 tons of carbon dioxide (CO2) equivalent into the atmosphere, thanks to the reduction in the use of fossil fuels.

Two percent of the net profits will go to Puesto Sey, a Kolla indigenous community that has collective rights over the land where there is now an endless expanse of solar panels.

The irony is that Puesto Sey, like the other communities in the area, do not receive electricity from Cauchari because they are not connected to the national grid.

Most of the villages and small towns in the Puna, mainly inhabited by Kolla indigenous people, are supplied with electricity from diesel-fueled generators, although in recent years some small local solar parks have been built.

Nor does Cauchari make a difference today in terms of local employment, because although the two-year construction process employed more than 1,500 people, the plant itself only needs 60 to 70 highly specialised technicians.

And perhaps the most difficult question to answer is whether Argentina or any other Latin American country will ever be able to supply such large renewable energy projects with local technology.

Hoerth told IPS that the construction process brought about 100 million dollars to Jujuy’s domestic market, since 22.7 percent of the plant’s electromechanical components were domestically made.

However, the president of Cauchari said the local manufacture of technology for renewable energy sources is still a distant dream.

“I wish we could develop a national industry. But it is very complicated because China has reached such cheap costs that it has flooded the European market,” he said.