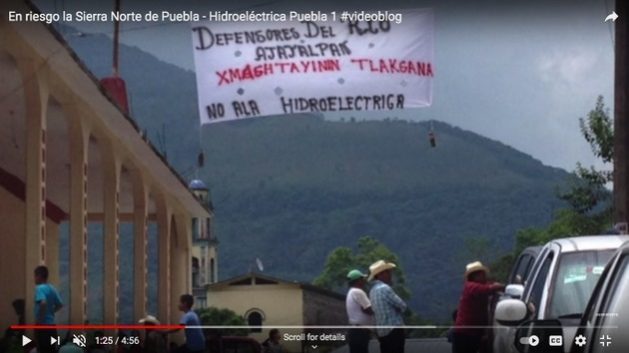 Since 2016, inhabitants of three municipalities in the central Mexican state of Puebla have managed to block construction of the Puebla 1 private hydroelectric power plant, by means of a lawsuit arguing that the mandatory indigenous consultation was not carried out and that the megaproject will cause environmental damage. This screenshot from a video shows a protest in one of the municipalities by the Fundar Centre for Analysis and Research. CREDIT: IPS/Fundar

MEXICO CITY, Mar 19 2021 (IPS) - Indigenous farmers on communally owned lands have blocked since 2016 a private solar farm in the southeastern Mexican state of Yucatan by means of legal action, due to the company’s failure to hold consultations with local native communities and the risk of environmental damage.

“They opened up roads without the knowledge of the local communities. A consultation was held in another municipality, but not here,” Aurelio Mugarte, a Maya indigenous man, told IPS by telephone.

Like his neighbours, Mugarte farms on the San José Tipceh ejido, 1,468 hectares of public land given to the community to farm.

The solar power project is divided into Ticul A and B and is owned by Vega Solar Energía, a Mexican subsidiary of the U.S.-based Sun Power, whose majority shareholder is the French oil giant Total SE. It involves the clearing of some 700 hectares of jungle in an area that is sensitive due to its biodiversity and its karst terrain, which is porous and prone to sinkholes.

The state of Yucatan is on the Yucatan Peninsula, which also includes the states of Campeche and Quintana Roo and is the second most important terrestrial ecosystem in Latin America, after the Amazon rainforest.

Local communities have filed two lawsuits against the park, which would cover parts of the municipalities of Muna, Sacalum and Ticul, some 1,300 km southeast of Mexico City.

The plant is a product of the 2013 energy reform that opened the generation and commercialisation of energy in Mexico to domestic and foreign private capital. Transmission and distribution of electric power were left in the hands of the state-owned Comisión Federal de Electricidad (CFE).

As a result of the reform, the government held three electricity auctions in 2016 and 2017 for the construction of generators that would sell their production to the CFE. In 2016, Vega Solar Energía was one of the winners with Ticul A and B, which will install about 1.22 million solar panels to generate about 600 megawatts (Mw).

“The reform affected us and allowed companies to come in,” Mugarte complained. “The government sought to favour the company. If renewable energy is going to destroy nature, I don’t see the benefit.”

Now President Andrés Manuel López Obrador, in office since December 2018, wants to reverse the energy reform introduced by his predecessor Enrique Peña Nieto in August 2013, at least as far as electric power is concerned.

The new electricity law, enacted on Mar. 9, favours CFE plants over private generators, even though they are more expensive.

As of now, in the Wholesale Electricity Market (MEM), managed by the state-owned autonomous National Energy Centre (Cenace), the electric power generated by the national electricity system must be sold first, before the power from private corporations, especially from wind and solar sources.

The government and its party, the National Regeneration Movement (MORENA), did not touch the constitution as was done in 2013. But the changes reverse the energy reform that opened generation and commercialisation to private capital.

The 2013 reform sought to promote competition in the market and lower rates. But CFE argued that it was harmed by the changes and that it lost money as the power it generated was relegated. In January, 98 generators participated in the MEM, including CFE and private operators.

With the electricity counter-reform, Cenace has to first sell the energy generated by CFE hydroelectric plants, then electricity from fossil fuels and other sources of that state-owned company, then wind and solar power from private generators, and lastly electric power generated with gas and steam in privately-owned combined cycle plants. 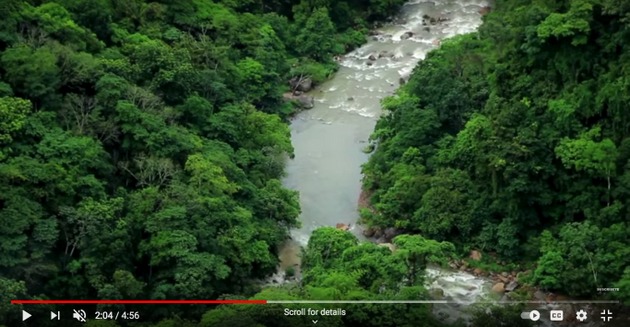 The Puebla 1 Hydroelectric Project would divert the Ajajalpan River in the central Mexican state of Puebla, thus damaging the main water source of three municipalities in the northern highlands of that Mexican region. CREDIT: IPS/Fundar

It also requires the autonomous Energy Regulatory Commission to declare invalid the self-supply permits obtained by individuals to generate their own electricity from sources such as gas, hydroelectric, wind and solar power, in what is known as distributed or decentralised generation.

It also subjects future generation permits to the energy ministry’s planning criteria, which means they are placed under government provisions. In addition, the new regulations eliminate the requirement for electricity auctions.

The application of the new law is temporarily suspended by order of a judge, although it is assumed that it will go ahead.

In Latin America’s second largest economy, with a population of 126 million people, electricity consumption currently stands at around 270,000 gigawatt hours, half of which is provided by CFE and the rest by private operators.

The communities affected by megaprojects feel that the counter-reform gives them a respite, since they will no longer be under the shadow of private companies. But they are not free from the CFE, which has historically ignored their demands.

“We don’t think the changes benefit us, because the energy is not for us,” said Mugarte, whose area is powered by electricity generated by a thermoelectric plant fired by fossil fuels.

The energy reform left local communities at the mercy of the CFE and the state-owned Petróleos Mexicanos (Pemex) and private companies, as they could not refuse the installation of a project.

Although it requires a social impact assessment and consultations with indigenous communities, these were carried out after the planning and design of the project and became a mere formality.

As a result, affected peoples have opted to sue in court for the lack of what they consider to be a consultation free of pressure, prior to the design and construction of the projects and with adequate and timely information.

The same scheme has been repeated in other regions of the country as in Yucatan.

In the central state of Puebla, the company Deselec 1-Comexhidro aims to build the Puebla 1 hydroelectric plant to supply electricity to the Mexican subsidiaries of the U.S. retail chain Walmart, a restaurant chain and a clothing chain.

“Yes it has changed things somewhat, because it allows the energy to be Mexican, since it was privatised,” José Galindo, a member of the Totonaco indigenous people of eastern Mexico, told IPS by telephone from the municipality of San Felipe Petatlán in Puebla. “But nevertheless it is worrying. They want to continue managing the oil, the contamination, and they want more hydroelectric dams to be built, which will continue to obstruct the watersheds.”

Galindo, a member of the non-governmental Totonaco Regional Council, made it clear that “we do not feel more supported by the CFE, and we do not feel that we have better quality energy.”

Since 2016, residents in three municipalities of Puebla have been blocking a hydroelectric megaproject on the Ajajalpan river, their main water source, through two legal actions. The so-called Puebla 1 Hydroelectric Project would build two dams, Ahuacoya and Zoquiapa, the first of which would be 45 metres high and would have a generating capacity of 60 Mw.

“There was a simulation of indigenous consultation. They already had the permits a few years ago, and all they did was tell the people what they wanted to do. The government institutions were part of the simulation. They never informed us of the project,” said Galindo, whose municipality of 4,000 inhabitants is some 230 kilometres south of Mexico City.

Prior to the legislative approval of the changes in the electricity commercialisation system, authorities and organisations of 14 indigenous peoples requested to participate in renewable generation.

They raised the need for “a new model of social and democratic energy transition, without the participation of large multinationals or private megaprojects.”

Since 2018, disgruntled communities have managed to stop at least six renewable projects in Yucatan and a hydroelectric plant in Puebla.

The CFE does not plan to invest in renewable energy, because it favours fossil fuels, large hydroelectric plants and nuclear energy.

Communities such as San José Tipceh and San Felipe Tepatlán only want the projects to be cancelled.

“We want the environmental licence to be denied. If renewable energy is going to destroy nature, I don’t see the benefit. Let them put it in the desert or in a place that does not affect nature,” Mugarte said.

For his part, Galindo hopes the hydroelectric plant will be cancelled. “That would be very important, because there are many violations of rights. I wish that each town could have and control its own energy,” he said.