COLOMBO, Sri Lanka, Mar 2 2021 (IPS) - As a member of the second wave of the feminist movement who were also the first generation of women to receive positions of leadership, I recall the prejudices and biases that framed our experience. Women rarely were put in charge of “hard” core issues, only what were termed “soft” ones in keeping with their role as nurturer and carer. When they were present in the Board room, they were often silent. When they spoke, they were inevitably spoken over. It was the exceptional woman who could navigate the corridors of corporate culture, male expectations, and a workplace that was unsympathetic to her dual burden. 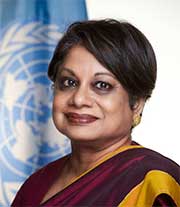 For women of my generation the dual burden of striving competitively in the workplace and bringing up a loving home was a defining life experience. Many gave up work altogether or settled into intermediate positions in the workplace and away from the glare of leadership. Managing this dual burden is a major issue for most women. In some countries the social welfare system steps in to provide children with care while their parents work. In others, a network of domestic aides support middleclass women allowing them to excel in the workplace while the domestic aide workers, themselves, have to rely on family or makeshift arrangements causing a great deal of stress and overwork. Increasingly young men share the burden at home with their wives allowing for a more equitable balance between work and home. For generations commitments at home meant women in the workplace did not aspire to leadership and the time and energy commitments that such leadership entails.

Over the last half century things have changed. There have been many impressive women political leaders and CEOs of companies. From Chancellor Angela Merkel to Indra Nooyi, young girls now have role models that have reached the top of their profession. And yet, according to the Institute for Women’s Leadership, globally women hold just 24% of senior leadership positions. Women are only 4% of the S&P top 500 companies. There is still a great deal to be done and the mobilization to get more women into leadership positions should not falter.

As we watch women take their rightful place in the world we can ask ourselves, “is their a distinctive style of women’s leadership”? In the past, many doubters of women’s leadership qualities used to point to women leaders such as Indira Gandhi and Margaret Thatcher as being indistinguishable from the men. But the recent pandemic has brought to the fore a whole group of women leaders who showed us things could be done differently.

Jacinda Arden of New Zealand, President Tsai Ing Wen of Taiwan and Prime Minister Katrin Jakobsdottir of Iceland, the next new generation of women leaders handled the corona crisis in a unique and successful way exposing the inadequacies of what is termed the “strong man” adulation of the decade before. In dealing with the pandemic, they were low-key, focused on the delivery of services, clearly setting goals and standards and staying away from brinkmanship. Interestingly for these young women leaders the family is a natural part of the narrative, giving birth while in office or enjoying their husbands as equal partners in taking care of the children.

But the hope for anyone interested in women’s rights must be the very youthful leaders coming from Generation Z. Globally connected, passionate in their causes and armed with technology and social media they are ready to make sweeping changes. Malala was the first to occupy the global stage with her plea for girl’s education, a millennial goal that has actually been achieved. Then we have Greta Thunberg whose unflinching dedication to the cause of climate change and the preservation of the environment has inspired millions of young people

One such person is Disha Annappa Ravi, a young campaigner in Bangalor, India who was arrested for sharing a toolkit to assist the organizers of the farmers movement that was making demands of the government. Defiant in court she said, “if highlighting farmers’ protests globally is sedition, I am better off in jail.” The Court, inspired by this young woman leader, said in its powerful judgment, “Citizens are conscience keepers of government in any democratic nation. They cannot be put behind bars simply because they choose to disagree with State policies.” It is these young women leaders in many countries around the world who may help us fulfill the many dreams and visions spelt out by generations of women leaders who have fought for equal rights and social justice.

The author is a Sri Lankan lawyer, diplomat and human rights advocate who served as the Under-Secretary-General of the United Nations, Special Representative for Children and Armed Conflict. In 2017, after atrocities against the Rohingya people, she was appointed a Member of the United Nations Fact Finding Mission on Myanmar.