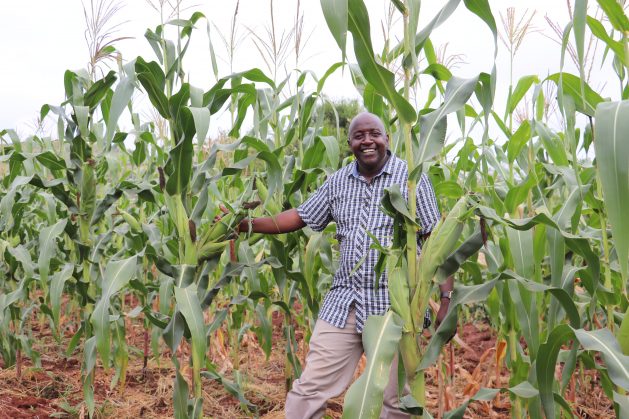 Justus Kimeu on his farm in Kithiani village, Makueni County, Kenya. By using the regenerative agriculture (RA) technique this farmer produced a bumper maize harvest during a very dry season. Almost 900 farmers in Kenya's two dryland counties of Embu and Makueni are participating in a pilot project to see how regenerative agriculture can be used to improve food productivity. Credit: Isaiah Esipisu/IPS

MAKUENI, Kenya, May 11 2021 (IPS) - It is an uncommon occurrence to see farms with flourishing healthy crops in Kenya’s semi-arid Makueni County. But in Kithiani village, Justus Kimeu’s two-acre piece of land stands out from the rest. After embracing the regenerative agriculture (RA) technique, the 52-year-old farmer is looking forward to a bumper harvest of maize as all his neighbours count their losses following this year’s failed season.

“I have been a farmer for many years, but I have never seen such a healthy crop during such a dry season,” Kimeu told IPS. “All the road users who pass by this farm can hardly go away without stopping to have a second look at a crop that has defied the prevailing tough climatic conditions.”

Kimeu is one of 900 farmers in Kenya’s two dryland counties of Embu and Makueni who are participating in a pilot project to see how RA can be used to improve food productivity.

The technique, which is being piloted by the Alliance for a Green Revolution in Africa (AGRA), is a dynamic and holistic way of farming that involves all the principals of permaculture and organic farming, such as minimum tillage, use of cover crops, crop rotation, terracing to reduce soil erosion, heavy mulching to keep the soils moist, use of basins to preserve soil moisture and the use of composted manure to give the topsoil the texture of a virgin fertile arable land.

“The main theory of this technique is actually to return the topsoil back to its original state,” Michael Mutua, an associate program officer in charge of RA at AGRA, told IPS. “Instead of feeding the crop, we concentrate on feeding the soil,” he said.

According the Food Sustainability Index created by Barilla Centre for Food and Nutrition (BCFN) and the Economist Intelligence Unit, increased adoption of regenerative farm practices reduces carbon emissions during cultivation and sequesters carbon into the soil.

In a proposal of 10 interdisciplinary actions to finding ways to nourish both people and the planet post-COVID-19, one of the suggestions by BCFN was that the world develop internationally agreed-upon standards for RA practices and agroecology, as well as common definitions for healthy and sustainable food systems and food.

To popularise the new farming technique in Kenya, AGRA collaborated with the two county governments of Makueni and Embu, and with the Cereal Growers Association (CGA) to identify lead farmers.

The farmers were then trained on RA practices and were supported to create plots known as ‘mother demos’.

“A mother demo is actually a place for farmers’ practical lessons,” said Mutua. “It consists of four plots, where one plot is done using all the recommended RA practices, the second one using farming methods commonly used in the area, the third one is by using part of the regenerative agriculture principles, and the fourth one is the control plot, where the same crop is planted without any agronomic practice,” he explained.

Each farmer then recruited up to 100 smallholder farmers from the neighbourhood to teach them from the mother demo. Once the farmers felt confident, they returned to their own farms to set up a baby demo, which is a single plot using all the principles of AR.

“Nearly all our farmers are at the baby demo stage,” said Mutua. “But a few bold ones like Kimeu went straight to implementation without doing a small demo for the learning purpose,” he said.

According to Kimeu, the lessons at the mother demo stage were sufficient, “and doing a baby demo for him, would amount to a wasted season,” he told IPS.

“When I decided to implement this technique, my farm was bare without much vegetation. So I started by making terraces and after it rained, different weeds sprouted. Together with my household members we manually uprooted all the weeds and left them on the farm to dry and decompose before making small basins in which we were going to plant the crop,” explained the farmer.

The basins were then filled with organic manure and some topsoil. And when it rained for the second time, hybrid drought tolerant maize variety seeds were planted inside the moist basins and any weed that sprouted was manually uprooted and left to dry and rot on the farm.

“We try as much as possible to avoid tillage or any form of disturbing the soil for it to regenerate naturally to its original form,” Kimeu said, noting that he also avoided use of conventional fertilisers. 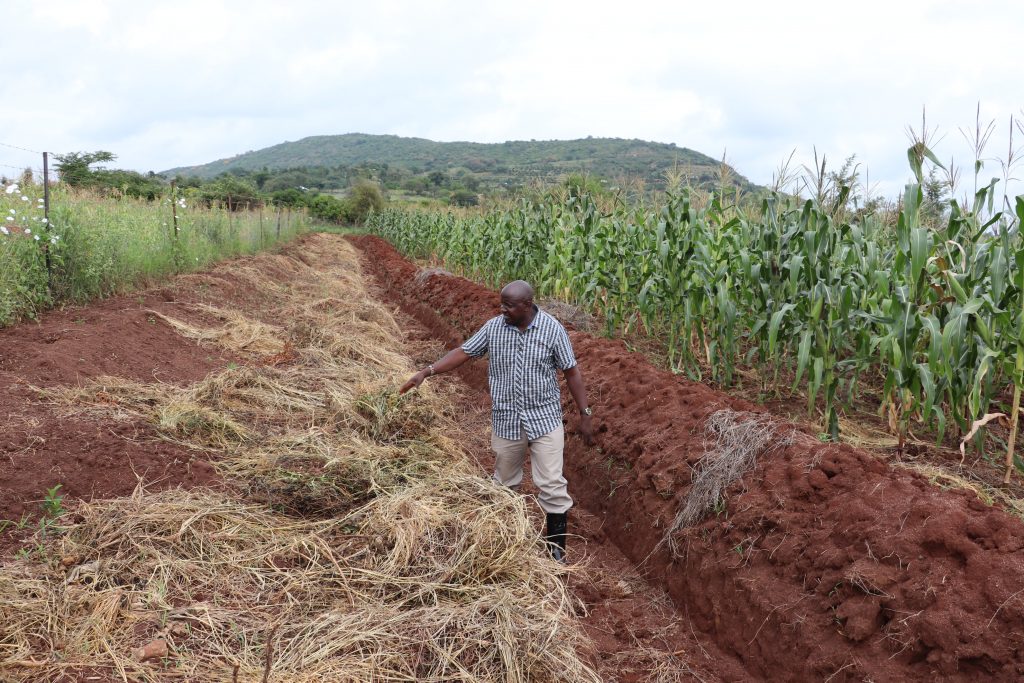 Almost 900 farmers from the two counties are expected to graduate from the baby demo stage and implement RA during the 2021/2022 season. “If well implemented, it will more than double food security among the participating households,” said Mutua.

Bob Kisyula, the Makueni County Minister of Agriculture Livestock and Fisheries, told IPS: “If our smallholder farmers could embrace these techniques and produce such healthy crops, then we will never need alms and food aid even in the toughest seasons.”

Kisyula said that the County Government also invested in rippers, which are used to ensure that there is minimum disturbance of the soil as part of the RA approach.

Today, Kimeu has become a role model and a village hero.

“In this short period, I have been approached by hundreds of farmers from my village and other places who are seeking to understand how the technique works,” he said.