NEW DELHI, India, May 25 2021 (IPS) - In 2016, when Bosnian-American professional basketball player, Indira Kaljo got in touch with Asma Elbadawi because she had been forced to give up playing basketball after she started wearing the hijab, they decided to take it up with the International Federation of Basketball (FIBA), the sports governing body to change its rules on headgear. 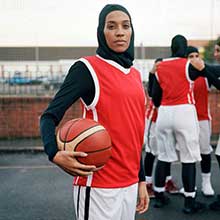 Most sports federations around the world don’t specify or ban Hijab, but the usage of general language in which ‘headgear’ is banned, means women who wear Hijab, or men or women who wear turbans or other religious gears cannot participate in those sports. However the challenge was not just to overturn the rule, but also counter the belief what Muslim women can or can’t do, which includes playing ‘Basketball’.

Asma became one of the leading voices in the fight to get FIBA to permanently lift the ban on headgears to allow players in turbans, hijabs and other religious headwear to play basketball at all levels. It took four years to finally win the #FIBAAllowHijabCampaign and to overturn the rule.

“That moment when I realized we won the campaign, I was so excited about the girls who would now get that opportunity to play,” says Asma Elbadawi to me in an interview. “Sometimes I think about it and I can’t believe it happened, because in my mind I am a little person, one voice, but we all built our voices together and became so loud that we changed history.”

“There were so many people from outside the community who did not understand what it meant for a Muslim woman to maintain her modesty, and if that meant choosing to wear the Hijab, they kept saying why don’t you take it off,” says Asma.

When it comes to sports, it took women a long battle to be able to participate in competitive events, and they still undergo the humiliating practice of sex-testing to make sure they are not men trying to cheat the system – biologically or literally. There was a time when women were not permitted to watch the Olympic games, which were founded in 1894, reserved just for male athletes. It was only in 1900, women were admitted as participants in sports, “that were considered to be compatible with their femininity and fragility, but excluded from the showpiece events of track and field”. It took another 28 years for women to compete for athletics medals, which included, the 100m, the 4x100m relay, the high jump, the discus and the 800m. The latter being an occasion marred by ‘fake news’.

It is not often we see women in male-dominated sports, and even less so for Muslim women, who already have to defy stereotypes, jump multiple social, religious and break personal barriers to be able to be where they are.

“When you deny a whole demographic of people the ability to join in, you are losing out on talent, and most of the time, that talent can add so much to the space and the environment,” says Asma.

It is important for sport federations as institutions to create a more inclusive environment with bigger female representations. How women are portrayed in the press matter, and the media must be held accountable for its unconscious biases and gender markings.

“She’s the female Usain Bolt,” such statements intend to flatter women, “but are actually another way that men’s sport is presented as the standard against which women’s sport should be judged”. Sexualization of female athletes, compulsory heterosexuality and appropriate femininity focused on the athletes bodies rather than athletic abilities are all barriers that are preventing women from performing at the highest level. “Many female athletes are only accepted by the society and receive coverage in the media, if they participate in traditionally feminine sports. If a woman dares to participate in a masculine sport, their sexuality is immediately questioned,” highlights this report.

Multiple athletics retailers have been pulled up for their treatment of women or people of colour in the workplace. Nike, a brand which identified women as one of “four epic growth opportunities” faced criticism for its treatment of female atheltes during pregnancy, in addition to a class action lawsuit alleging sex discremination. At Adidas, Black employees formed a coalition to pressure top management for change against systemic racism. Both the retailers released their list of company actions, acknowledging to put a stop to racism.

Sport is meant to be one of the most important socio-cultural learning experiences. Girls and women who play sports have higher levels of confidence and self-esteem, lower levels of depression, and more positive body image. Playing a sport is where you traditionally learn about teamwork, goal setting, pursuit of excellence in performance and other achievement-oriented behaviours – critical skills necessary for success in the workplace. However the written and unwritten rules in the sports industry such as ban on headgear, are arguably discriminating against female athletes, and that’s why voices like Asma are needed when women’s sports are de-emphasized.

“You do feel you are representing more than just yourself when you wear the hijab, especially when you are going into communities where they have never seen women wearing hijab. You want to show your best self because you want them to feel like these girls are doing something amazing, and everything we hear in the media is not true about their community,” says Asma.

The challenge is not just from the sport providers, the industry and its management, but also to change the attitude of women and girls towards sports and activities in order to increase participation. The barriers to participation faced by Muslim women are not different from those faced by women from other ethnicity and different cultural backgrounds. Safety and security are important to prevent racially or gender motivated incidents. Cultural sensitivity is definitely an enabling tact, but it is also important to promote positive images, have more diverse role models, stories of success and empowerment, along with simply letting a woman to just be an athlete, without stereotypes, without othering and patronization towards what she can or can’t do. As Asma says, “representation is important because it allows young girls to see women they can relate to in fields they aspire to be in. It gives them hope that they can also achieve those things.”

These would be key to developing long term attitudinal change and increasing participation levels of girls and women in sports – which no longer is or should be defined just by the ‘male gaze’.