This article is part of IPS' coverage of World Food Day, celebrated Oct. 16, whose 2021 theme is: Grow, nourish, sustain. Together. 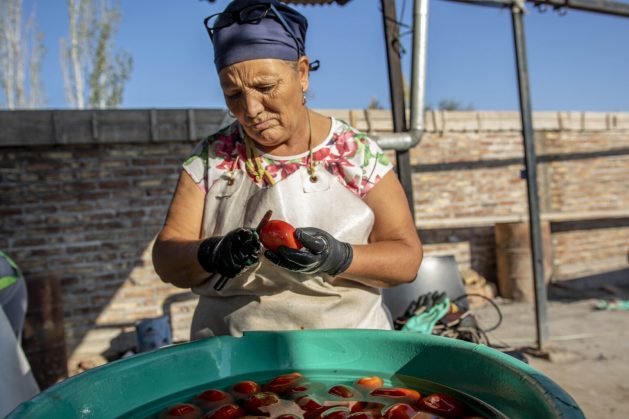 One of the Argentine small farmer groups participating in the digital marketing project uses agroecological irrigation and tomato crushing techniques in the province of Mendoza. CREDIT: Nicolás Heredia/Alma Nativa

BUENOS AIRES, Oct 14 2021 (IPS) - “The biggest problem for family farmers has always been to market and sell what they produce, at a fair price,” says Natalia Manini, a member of the Union of Landless Rural Workers (UST), a small farmers organisation in Argentina that has been taking steps to forge direct ties with consumers.

The UST, which groups producers of fresh vegetables, preserves and honey, as well as goat and sheep breeders, from the western province of Mendoza, opened its own premises in April in the provincial capital of the same name.

In addition, it has just joined Alma Nativa (“native soul”), a network created to market and sell products from peasant and indigenous organisations, which brings together more than 4,300 producers grouped in 21 organisations, and now sells its products over the Internet.

“Selling wholesale to a distributor is simple, but the problem is that a large part of the income does not reach the producer,” Manini told IPS from the town of Lavalle in Mendoza province.

"The aim is to mobilise consumers to buy products from Latin American ecosystems that are made with respect for the environment, while small producers benefit from visibility and logistical support so that local products reach the entire country.” -- Guadalupe Marín

The rural leader argues that, due to cost considerations, farmers can only access fair trade through collective projects, which have received a boost from the acceleration of digital changes generated by the covid-19 pandemic.

Alma Nativa is a marketing and sales solution formally created in 2018 by two Argentine non-governmental organisations (NGOs) focused on socio-environmental issues: Fibo Social Impact and the Cultural Association for Integral Development (ACDI). Their approach was to go a step beyond the scheme of economic support for productive development projects.

“Back in 2014 we began to ask ourselves why small farmer and indigenous communities could not secure profitable prices for the food and handicrafts they produce, and to think about how to get farmers to stop depending on donations and subsidies from NGOs and the state,” Fibo director Gabriela Sbarra told IPS in an interview in Buenos Aires.

Sbarra was a regular participant in regional community product fairs, which prior to the restrictions put in place due to the pandemic were often organised in Argentina by the authorities, who financed the setting up of the stands, accommodation and travel costs from their communities for farmers and craftspeople.

It was only thanks to this economic aid that farmers and artisans were able to make a profit.

“The effort was geared towards finding a genuine market for these products, which could not be sold online because it is very difficult to generate traffic on the Internet and they cannot reach supermarkets either, because they have no production volume. Informality was leaving communities out of the market,” Sbarra explained. 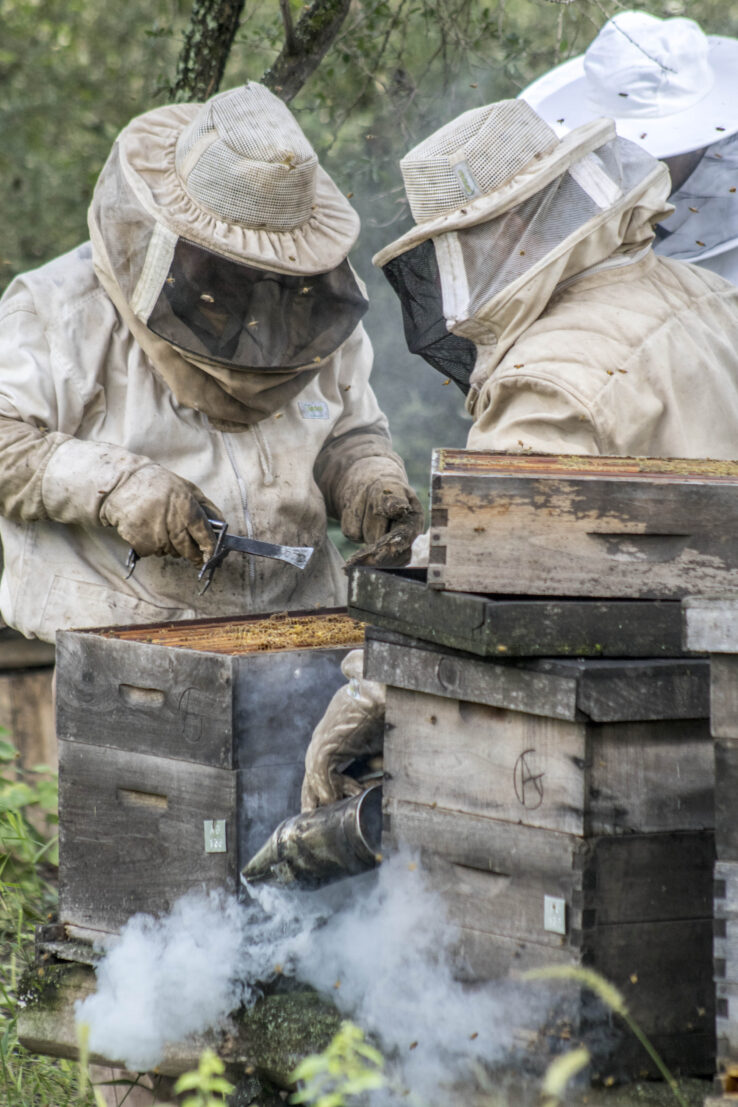 Three cooperatives in the Chaco region, the great forested plain that Argentina shares with Bolivia and Paraguay, are dedicated to honey production and are part of the Alma Nativa project, through which they sell their products to consumers throughout the country via the Internet. CREDIT: Nicolás Heredia/Alma Nativa

So the founders of Alma Nativa knocked on the doors of Mercado Libre, an e-commerce giant born in Argentina that has expanded throughout most of Latin America. The company agreed not to charge commissions for sales by an online store of agroecological food produced by local communities.

Alma Nativa then set up a warehouse in the town of Villa Madero, on the outskirts of Buenos Aires, where products arriving from rural communities throughout the country are labeled for distribution.

“The pandemic has created an opportunity, because it helped to open a debate about what we eat. Many people began to question how food is produced and even forced agribusiness companies to think about more sustainable production systems,” said Manini.

Norberto Gugliotta, manager of the Cosar Beekeeping Cooperative, emphasised that the pandemic not only accelerated the process of digitalisation of producers and consumers, but also fueled the search by a growing part of society for healthy food produced in a socially responsible manner.

“We were prepared to seize the opportunity, because our products were ready, so we joined Alma Nativa this year,” said the beekeeper from the town of Sauce Viejo. Gugliotta is the visible face of a cooperative made up of some 120 producers in the province of Santa Fe, in the centre of this South American country, who produce certified organic, fair trade honey.

Argentina, Latin America’s third largest economy, is an agricultural powerhouse, with a powerful agribusiness sector whose main products are soybeans, corn and soybean oil, which in 2020 generated 26.3 billion dollars in exports, according to official figures.

Behind the success lies a huge universe of family farmers and peasant and indigenous communities. According to the latest National Agricultural Census, carried out in 2018, more than 90 percent of the country’s 250,881 farms are family-run.

But the infrastructure and technological lag in rural areas is significant, as demonstrated by the fact that only 35 percent of farms have Internet access.

The deprivation is particularly acute in the Chaco, a neglected region in the north of the country, home to some 200,000 indigenous people belonging to nine groups whose economy is closely linked to natural resources, according to the non-governmental Fundapaz. 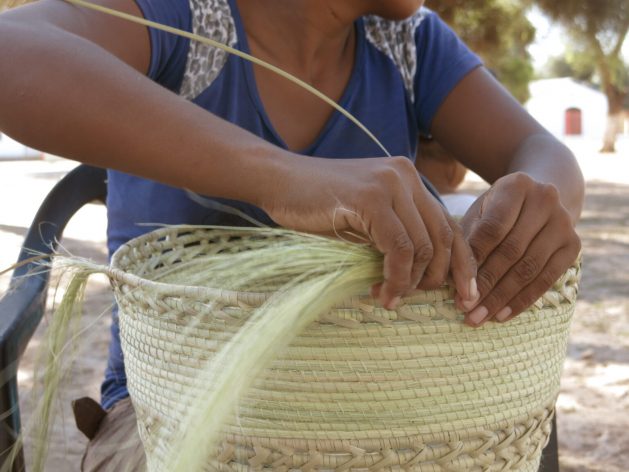 Indigenous artisans from the Pilagá community in the northern province of Formosa, within the Gran Chaco region, have begun selling their baskets online throughout Argentina. CREDIT: Rosario Bobbio/Alma Nativa

Communities from the Chaco, a vast region of low forests and savannas and rich biodiversity covering more than one million square km in Argentina, Bolivia and Paraguay, which is home to a diversity of native peoples, also began to market their handicrafts over Mercado Libre in the last few weeks.

“This initiative originated in Brazil with the ‘Amazonia em Pé’ programme and today we are replicating it in Argentina, in the Gran Chaco area. It seeks to build bridges between local artisans and consumers throughout the country,” explained Guadalupe Marín, director of sustainability at Mercado Libre.

“The aim is to mobilise consumers to buy products from Latin American ecosystems that are made with respect for the environment, while small producers benefit from visibility and logistical support so that local products reach the entire country,” she told IPS in Buenos Aires.

On Sept. 27, Mercado Libre launched the campaign “From the Gran Chaco, for you”, which offers for sale more than 2,500 products in 200 categories, such as baskets, indigenous and local art, decorative elements made with natural fibers, honey, weavings and handmade games.

It includes not only Alma Nativa, but also Emprendedores por Naturaleza (“entrepreneurs by/for nature”), a programme launched by the environmental foundation Rewilding Argentina, which works for the conservation of the Chaco and now promotes the sale of products made by 60 families living in rural areas adjacent to the El Impenetrable national park, the largest protected area in the region.

“The idea for the project arose last year, after we conducted a socioeconomic survey among 250 families in the area that found that the only income of 98 percent of them comes from welfare,” said Fatima Hollmann, regional coordinator of the Rewilding Argentina Communities Programme.

She told IPS that “people raise livestock for subsistence and sometimes work on fencing a field or some other temporary task, but there are no steady sources of employment in El Impenetrable.”

“That is why we are trying to generate income for local residents,” Hollmann explained in an interview in Buenos Aires. “Our production lines are focused on ceramics, since most people have built their houses there with adobe. Many also know how to make bricks and we have held trainings to teach people to turn a brick into an artistic piece, inspired by native fauna, which transmits the importance of conserving the forest.”

According to the figures released by the expert during the first week of the programme “From the Gran Chaco, for you” in early October, 644 products were offered for sale, of which 382 were sold to buyers from more than 10 Argentine provinces, including 100 percent of the textiles available and 76 percent of the wooden handicrafts.

“The alternative is to cut down the native forests,” Hollmann says. “We are proposing a transition from an extractivist economy to a regenerative one, which contributes to the reconstruction of the ecosystem, and gives consumers in the cities the chance to contribute to that goal.”