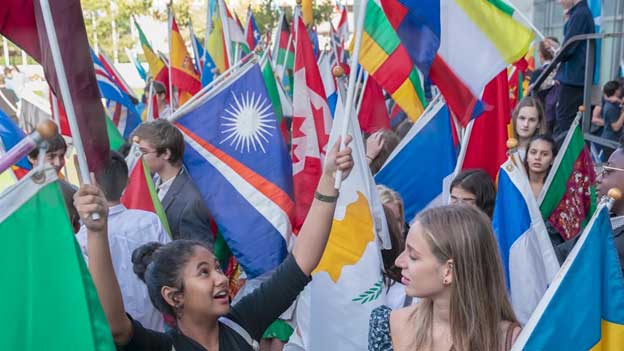 “Our Common Agenda” report looks ahead to the next 25 years and represents the Secretary-General’s vision on the future of global cooperation and reinvigorating inclusive, networked, and effective multilateralism. The Secretary-General presented his report to the General Assembly in September 2021 before the end of the 75th session of the General Assembly. Credit: United Nations

KATHMANDU, Nepal, Oct 4 2021 (IPS) - There is no doubt that Secretary General Antonio Guterres is going big and bold with the recent release of an ambitious blueprint that could pave the way for a more inclusive, effective and networked international system centered on youth’s aspirations and needs.

Titled Our Common Agenda, the report is fundamentally a call for action, a manifesto for change with plenty of innovative ideas, an encompassing and holistic document that builds on the Declaration on the Commemoration of the Seventy-Fifth Anniversary of the United Nations that was signed last year on 21st of September.

The aim is really to start a reflection that leads to imagine a possible different and better future as there is the recognition that we have almost reached the breaking point and fundamental changes are urgent.

As stated in the document, Our Common Agenda “represents the Secretary General‘s vision on the future of global cooperation and reinvigorating an inclusive, networked, effective multilateralism” and there was no better way for the Secretary General to start his second mandate.

The challenges are so dire and multifaceted.

From the “triple planetary emergency” of climate change, biodiversity and pollution to envisioning a better, more equal education and health care systems while making a strong case on the centrality of social protection systems as the best shield to protect the most vulnerable in times of shocks, it is high time for a difference global governance.

Such new system can better reflect an approach to international relations based on cooperation and solidarity.

This is exactly what Guterres is trying to pitch with Our Common Agenda, concrete actions that might show the way to the international community on the directions global leaders must take if they want to ensure a better, more equal planet for the generations to come.

There are many proposals on the plate.

For example, the High-Level Summit on the Future will be a platform aiming to forge a new global consensus on what our future should look like and how we secure it”.

Clear on this agenda is an effort to bolster a new understanding on peace by reducing new threats, including those coming from cyber warfare and lethal autonomous weapons, including investing in new efforts to prevent new conflicts.

The proposal for a Global Digital Compact is another idea to create a global debate and consensus on ensuring that new technologies, including artificial intelligence, become a force for good rather than a tool of self-harm and destruction.

Retooling the global economy to the new challenges emerging from the climate emergency is another top priority for the Secretary General.

New sources of funding must be created and in an era of complex and “creative” financial derivatives and other tools that are enriching the global capitalist elite, ironically, we are running out of imagination and creativity.

Indeed, funding is one of the thorniest roadblocks to an agreement at the Cop 26 in Glasgow.
How can we secure a better, greener and less polluted world if there is still no agreement on 100 billion USD climate financing package that was agreed in Paris back in 2015?

In trying to answer some of daunting questions, Secretary General Guterres is proposing biennial summits to “tackle public and private financing for climate change, with the overriding aim of creating a more sustainable and resilient global economy.”

New metrics able to “value the life and the wellbeing of the many over short term profit for the few” might replace the GDP.

What it is noticeable is that the level of ambition found in Our Common Agenda aims to create momentum on a series of ideas and initiatives that have been for long occupying a space in the debate sphere but could never move forward for lack of buy in.

The World Social Summit in 2025, another of the proposals, is exactly designed to rally world leaders behind the concept of New Social Contract, a better deal between the people and the government.

In practice it means universal health care, stronger education system, more responsive public services and huge investments in social protections measures. Unless a global consensus will emerge from other world leaders, hardly any of these proposals can be implemented.

Yet it is worthy for the UN as a system to enable a global conversation on what needs to be changed if the humankind aspires to thrive for the next decades and beyond.

Perhaps the most important part of Our Common Agenda is the focus given on the youth.

I am not really talking about tokenistic measures like creating a new UN Youth Office that basically will integrate the neglected and overshadow office of the UN SG’s Envoy on Youth.
The Secretary General is absolutely right in bringing youth on the top of the agenda but how doing so will be key.

While it is important to lay the ground for a Declaration on Future Generations, another promised envisioned in the report that also include holding a Transforming Education Summit in 2022, what at the end will count is finding practical ways to enable youth to be active and engage in the society.

The UN should certainly play a big part in centering a new global agenda for change on the youth but the proposals envision to “retrofitting” the UN System for the future, also included in the report, risk just to be a smokescreen.

We truly need a more agile, more effective UN System but in order to achieve such shift, so much change in its offices around the world must first happen because they really need to be more people responsive, more open and less opaque.

This means going well beyond the “McKinsey or BCG for the good” caps that represent the business as usual at the UN, a style that also contributes to insulate its agencies and programs in a comfortable, almost luxurious balloon.

A different mindset and different attitudes are needed and this does not mean neglecting or going beyond the UN core mandate of working with the governments.

This is something extremely important but should not prevent more openness and more understatement and perhaps humbleness.

Therefore, besides the bold announcements contained in Our Common Agenda that are related to youth, UN agencies and programs should undertake a turnaround so that they can truly become more youth centric.

This implies also a rethinking of usual working approaches in order to embrace the freshness and enthusiasm of the youth.

From the ground to the top, the UN system can truly foster civic engagement, youth participation especially by better involving girls and young women through new grassroots programs in partnership with local governments and civil society and by also advising the UN Country Offices.

As Secretary General is in last mandate, Guterres is right at envisioning a better world order focused on a genuine multilateralism.

Yet in order to create opportunities for the youth to be able to participate in the decision making at global level, the home work start within the UN system locally.

It is here where the Secretary General can really have an impact and shows the world leaders how to model a youth centric future.

The Author is the Co-Founder of ENGAGE, a not-for-profit NGO in Nepal. He writes on volunteerism, social inclusion, youth development and regional integration as an engine to improve people’s lives.