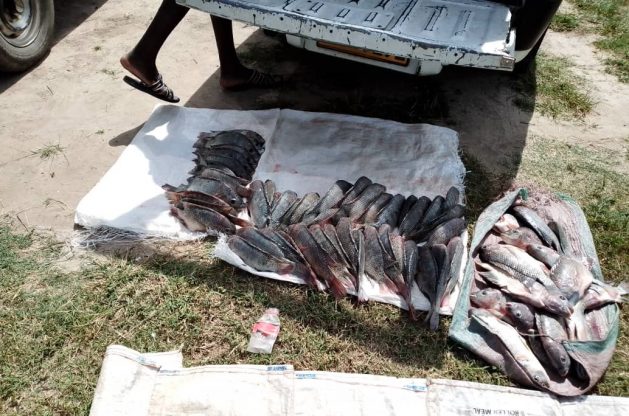 WTO is hoping for an end to fishing subsidy negotiations which have been ongoing for more than 20 years. Fishmonger in Bulawayo, Zimbabwe, displays his catch for sale. Credit: Ignatius Banda/IPS

Bulawayo, ZIMBABWE , Nov 11 2021 (IPS) - With subsidies of global fisheries back on the World Trade Organisation’s agenda, experts are calling for African governments to upscale the protection of the sector long plagued by activities that continue to threaten the continent’s blue economy.

The chair of the negotiations, Ambassador Santiago Wills of Colombia, earlier in November 2021 presented a revised draft text on fisheries subsidies. This will be used for discussions aimed at resolving remaining differences ahead of the 12th Ministerial Conference from November 20 to December 3.

The Director-General Ngozi Okonjo-Iweala called the subsidies “harmful” when the ministers met on July 15.
She said she was cautiously optimistic that there could be an agreement on how to cap subsidies that contribute to overfishing.

“The eyes of the world are really on us,” she said. “Time is short and I believe that this text reflects a very important step toward a final outcome. I really see a significant rebalancing of the provisions, including those pertaining to special and differential treatment, while, at the same time, maintaining the level of ambition.”

Meanwhile, independent researchers say harmful practices ranging from overfishing and too much reliance on fisheries for livelihoods have to be addressed by African governments.

Researchers at the Africa Centre for Strategic Studies say unfair subsidies go towards inputs such as fuel and larger fishing vessels which often go beyond regulated permits while also pushing out smaller players.

Amid those challenges, African countries still have to compete in global fish markets with rich countries which heavily subsidise the sector. This creates sustainable development gaps that will slow the realisation of the UN’s Sustainable Development Goal (SGD) 14, which seeks the sustainable use of marine resources.

Guided by the SGDs, the WTO gave the trade ministers ahead of the July 15 meeting the “task of securing an agreement on disciplines to eliminate subsidies for illegal, unreported and unregulated fishing and to prohibit certain forms of fisheries subsidies and contribute to overcapacity and overfishing,”

Developing and least developed countries will take centre stage of these negotiations to ensure they get a fair deal, with the meeting at the end of November, according to remarks by Okonjo-Iweala.

According to FAO, Africa is home to thriving artisanal fishing communities, employing more than 12 million people, with global demand projected to increase 30 percent by 2030.

There are concerns that low-income coastal fishing communities face the harshest challenges of depleting stocks as they compete with more sophisticated illegal fishing syndicates.

Rashid Sumaila of the Fisheries Economics Research Unit at the University of British Columbia, Canada, says African governments have to do more to see fewer nets cast in the continental waters.

“Governments must remove the incentive to overfish,” Sumaila told IPS.

“They must also improve national fisheries management and push for regional cooperative management of the sector and make illegal fishing unprofitable,” he said.

How African governments achieve that on a continent plagued by low incomes and a thriving informal sector could prove difficult, researchers from the Africa Centre for Strategic Studies contend.

By WTO estimates, global fisheries subsidies stand at around USD35 billion per year.

Citing data from the Food and Agriculture Organisation(FAO), the WTO says fish stocks are at risk of collapsing in many parts of the world due to overexploitation. It estimates that 34 percent of global stocks are overfished, “meaning they are being exploited at a pace where the fish population cannot replenish itself.”

While the WTO has cited what it calls “lack of political impetus” in the past two decades to resolve the contentious fisheries subsidies and protect smaller global players, Alice Tipping, a researcher at the International Institute for Sustainable Development’s Sustainable Trade and Fisheries, says despite the challenges of the past 20 years, collective action among both high- and low-income countries is the only way forward.

“The WTO negotiations are both technically and legally challenging because they require collective action from governments, but there is a clear benefit in having rules applied at the multilateral level so that everyone has to contribute to the solution,” Tipping told IPS.

Experts say the two-decade deadlock highlights the weak negotiating clout of African and other low-income countries, with some rich countries insisting on an exemption from the harmful subsidies ban while simultaneously allowing their fishing fleets to operate illegally on African shores.

As DG Okonjo-Iweala put it, “the fisheries subsidies negotiations are a test both of the WTO’s credibility as a multinational negotiating forum.”

“If we wait another 20 years, there may be no marine fisheries left to subsidise – or artisanal fishing communities to support,” Okonjo-Iweala warned.

The African continent finds itself in a bind as the African Union’s Agenda 2063 describes the fisheries as “Africa’s Future,” recognising the sector’s key role as a “catalyst for socio-economic transformation.”

This, however, highlights the continent’s reliance on fisheries when researchers are pushing for the decongestion and up-scaled regulation of artisanal fishers.

“A lot of artisanal fisheries is unreported and unregulated mainly because authorities do not affect enough means to document and manage those fisheries,” said Beatrice Gomez, Coordinator of the Coalition for Fair Fisheries Agreements (CFFA).

The CFFA is a platform of European and African groups raising awareness on the impact of EU-Africa agreements on African artisanal fishing communities.

“It would be better to have the activities of artisanal fishers documented properly to show their real importance for jobs and food security to ensure sustainability and long-term future,” Gomez told IPS by email.

“Ideally, for this work, artisanal fisheries have to be co-managed in collaboration with fishing communities, but it takes money, time and human resources which (African) governments do not have or do not want to devote to this.”

The World Bank says fisheries contribute USD24 billion to the African economy, making it a huge attraction for the poor.