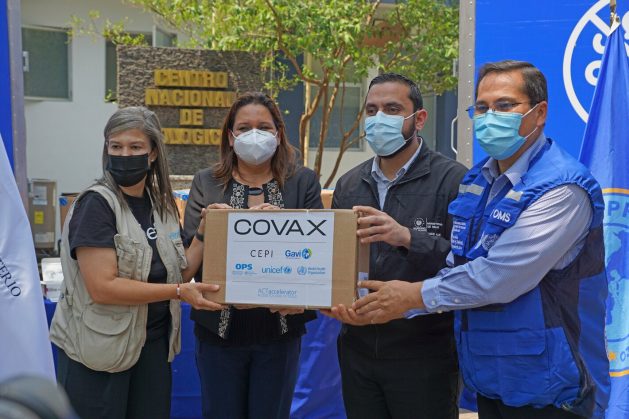 Delivery of syringes for the vaccination campaign in El Salvador. Latin American countries have made steady progress in immunizing their populations, partly through direct negotiations between their governments and suppliers and partly through international cooperation. CREDIT: PAHO

CARACAS, Jan 20 2022 (IPS) - The Covax initiative, the hope of the countries of the developing South to immunize their populations against COVID-19, only met half of its goals in 2021. And as 2022 begins, and the omicron variant of the virus is spreading fast, the scheme still depends on the decisions of pharmaceutical companies and the goodwill of donor governments.

José Manuel Durão Barroso, president of the Gavi Vaccine Alliance, one of the entities leading the Covax initiative, warned at the outset that “as long as a large part of the world’s population is unvaccinated, variants will continue to emerge and the pandemic will drag on.”

“We will only prevent variants from emerging if we are able to protect the entire world population, not just the rich areas,” added Durão Barroso, former prime minister of Portugal (2002-2004) and former president of the European Commission (2004-2014), in an email interview with IPS.

Covax, a global access fund for COVID-19 vaccines established in April 2020 as an alliance of countries, multilateral organizations and private foundations, had brought together 184 countries by October that year and set out to procure and distribute hundreds of millions of vaccines against the disease equitably in countries of the developing South.

Under the scheme, one group of countries self-funds and pays for the vaccines sent to it by Covax, while another, the poorest, are to receive the immunizations free of charge.

Shortly after the first vaccines were applied in industrialized countries in late 2020, an encouraging first shipment of 600,000 doses of the British Oxford-AstraZeneca vaccine arrived at the international airport in Accra, Ghana, the first country to benefit from the Covax mechanism, on Feb. 24, 2021.

The initiative was launched to distribute and apply, in more than a hundred countries, two billion doses throughout 2021, to ensure equitable immunization of 40 percent of the world’s population, before reaching 70 percent in the first half of 2022 – figures aimed at curbing the pandemic

"As long as a large part of the world's population is unvaccinated, variants will continue to emerge and the pandemic will drag on. We will only prevent variants from emerging if we are able to protect the entire world population, not just the rich areas." -- José Manuel Durão Barroso

But disaster lurked around the corner. India was hit by a sudden, devastating wave of COVID-19 infections, and the overcrowded country stopped exporting vaccines. And the Serum Institute of India (SII), the world’s largest vaccine manufacturer, was to be the source of the vaccines for the Gavi-Covax mechanism.

While high-income countries such as the United States, Canada, European nations and Israel purchased large quantities of vaccines from pharmaceutical transnationals, sometimes in excess of their populations, it was logical for Covax to seek supplies from India’s SII, where doses were also cheaper.

A dose prepared by the SII could cost three dollars, compared to 50 or 100 percent more in a Western pharmaceutical company.

Thus, while its recipients in the South awaited vaccines under great pressure from their local populations, Covax had to announce in April and May that there would be delays, which occurred in the following months, placing many countries in an uncertain and impotent wait while the virus variants raged.

By early January 2022, the number of infected cases exceeded 300 million worldwide and deaths surpassed 5.5 million, with two populous countries in the South, India and Brazil, following the worst-hit country in absolute numbers: the United States.

Durão Barroso explained that “the unfortunate epidemiological situation in India, combined with the fact that only a few vaccines had received the WHO emergency use listing and were available for global supply at that time, significantly delayed the launch of Covax.”

This situation “together with export restrictions, the hoarding of vaccines by many richer countries, and manufacturers who do not prioritize vaccine equity, meant that we could not access as many doses as we expected in the second and third quarters of the year,” added the head of Gavi.

When the race against the clock for vaccines began, “many governments in high-income countries made reference to global solidarity,” so that all nations would have access to immunizations, recalled Kate Elder, senior vaccines policy advisor at the humanitarian organization Médecins Sans Frontières (MSF).

“Pharmaceutical companies said they would do their part to ensure that the mistakes of the past were not repeated and that it was not just high-income countries that would have access to medical innovations,” Elder said in her response to a list of questions from IPS.

“However, this did not happen and calls to move away from the business-as-usual approach were ignored. High-income countries started buying up COVID-19 vaccine doses even before they were available,” she said.

The corporate behavior contradicted earlier assertions that antiviral vaccines should be global public goods, and pharmaceutical corporations, as in other circumstances in the past, prioritized sales to the highest bidder and sought primarily their own financial gain, according to MSF.

Confidence in vaccine delivery mechanisms, and in immunization itself, eroded, for example in Gambia, Namibia or Nigeria in Africa, or in Afghanistan and Pakistan in Asia. Anxiety also escalated because, having received the first dose of a vaccine, people demanded the second even more loudly

The first shipment of vaccines by Covax to a developing country arrived at the international airport in Accra, Ghana on Feb. 24, 2021. CREDIT: Krishnan/Covax

The countries of the developing South then began or intensified their search for vaccines outside of Covax. And, in parallel, some made progress in the production of their own vaccines, as was the case of Saudi Arabia, India and Singapore in Asia, Egypt in Africa and Argentina, Brazil, Cuba and Mexico in Latin America.

In the second half of 2021, donations began to appear, like a lifeline. Rich countries, having vaccinated large segments of their population and with vaccines or supplies such as syringes available, began to donate, often under the Covax umbrella, millions of doses to countries in the developing South.

Donor countries have so far offered Covax 591 million doses to be delivered in 2021 and the first half of 2022, and the scheme has sent 259 million doses to recipient countries, which partially explains the acceleration of deliveries in November (155 million) and December (310 million) 2021.

The main donors to Covax have been the United States (145 million doses), a group of 16 European Union members (81 million), the United Kingdom (11.5 million) and Canada and Japan (8.4 million doses each).

However, in some cases the doses arrived very close to their expiration date – or with a shortage of syringes or freezers to preserve them, as in Somalia and East Timor – forcing them to be discarded or sometimes sent back, as happened in the Democratic Republic of Congo and South Sudan.

Covax, in Elder’s view, was “naively ambitious,” and its success “was tied to unsound assumptions. Foreseeable challenges were not factored into the design of the mechanism and some poor policy decisions were made.”

“From its design to its governance and accountability mechanisms, the exclusion of meaningful participation of key stakeholders has undermined Covax’s ability to succeed,” the MSF vaccines policy expert argued.

The hoarding of vaccines and medicines by high-income countries has already happened on other occasions, such as during the HIV/AIDS epidemic or with regard to access to vaccines against pneumococcus, human papillomavirus or rotavirus.

For Elder, “if we want to learn from this experience to improve access to vaccines, the first step is to make a radical change. This basically means making the technology and innovation of medical tools public to guarantee an equitable model and decentralize production.

“Technology born of public investment cannot be owned by corporations, it must be a global public good,” she said.

In addition, “it is necessary to strengthen multilateral organizations and regional platforms, since each region knows best what its needs are, instead of public-private alliances based on the goodwill of pharmaceutical companies, which, at the end of the day, we already know what their interests are going to be.”

Durão Barroso said that Covax “has reached a point where it can now meet the demand of the countries it serves. However, there is a real risk that the supply disruption will continue in 2022.”

So “we have asked manufacturers to be more transparent about when they will make doses available, and from donor governments we have asked for larger and more predictable donations. This is finally happening,” added the head of Gavi.

Durão Barroso stressed that in the face of the spread of different variants “it is absolutely critical that we avoid a scenario of vaccine nationalism 2.0, where rich countries immobilize the supply of new vaccines.