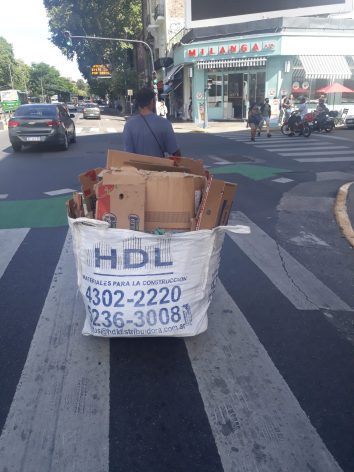 A garbage picker walks down Santa Fe Avenue, one of the main avenues in Buenos Aires. Argentina suffered a deep economic and social decline in 2018 and 2019, which was accentuated in 2020 by the pandemic. Although in 2021 there was a rebound, the most vulnerable did not benefit. CREDIT: Daniel Gutman/IPS

BUENOS AIRES, Feb 2 2022 (IPS) - Accustomed for decades to recurring economic crises, and hit hard in recent years by a steady loss of purchasing power, Argentines were informed on Friday Jan. 28 of a last-minute agreement with the IMF which, in the words of center-left President Alberto Fernández, takes “the noose off their necks”.

The understanding, which will refinance a gigantic 45 billion dollar loan that the IMF (International Monetary Fund) gave Argentina in 2018, was reached within hours of the first installment falling due in 2022. Argentina owed 18 billion dollars in payments this year, which the country could not afford and which have now been postponed until 2026.

After exhausting other sources of financing and resorting to the IMF in 2018, Argentina underwent a pronounced economic and social decline, which led to then center-right President Mauricio Macri’s failure to win re-election in late 2019.

When recovery was expected in 2020, the country was hit by the COVID-19 pandemic and a historic collapse of more than 10 percent of the economy. And although there was a rebound in 2021, it did not benefit the most vulnerable, as inflation exceeded 50 percent and was even higher in the case of staple foods.

This South American country of 45 million inhabitants which is the third largest economy in Latin America has, according to official data, a poverty rate of more than 40 percent, a proportion that climbs to 54 percent among children under 14 – a phenomenon that is partly explained by the higher proportion of large families among the poor.

However, Argentina was heading for an even greater economic and social catastrophe, warned the president, if it did not reach an agreement with the IMF.

“We had an unpayable debt that left us with no present and no future, and now we have a reasonable agreement that will allow us to grow,” said Fernández.

Thus, the IMF is once again lending money to Argentina to pay its debt, thanks to an agreement subject to quarterly reviews of the national accounts that -according to the government- do not imply a structural adjustment, like the many that the country has experienced in the context of its traumatic relationship with the multilateral financial organization.

“The best thing about this agreement with the Fund is what was avoided,” economist Andrés Borenstein, professor of public finance at the public University of Buenos Aires (UBA), told IPS in Buenos Aires.

“Without this understanding, the country would run out of financing and the consequences would be paid by those who have the least, because there would be more inflation, a greater decline in the real value of wages and a sharper devaluation of the currency,” he explained.

The government sought to allay the fears of the public who, based on past experience, associate agreements with the IMF with public spending cuts that lead to a decrease in economic activity and to general impoverishment.

“Compared to previous agreements that Argentina signed, this one does not contemplate restrictions that postpone our development,” said Fernández. “There will be no drop in real spending and there will be an increase in public works investment by the national government.”

Analysts, however, do not take the president’s words at face value. “It is true that the agreement is quite reasonable for the situation Argentina was in, but, as in any IMF program, there will be adjustments,” said Borenstein.

“Sharp increases in utility rates are coming and that will have an indirect impact on inflation and consumption,” he added.

Indeed, in a brief communiqué, the IMF pointed out that it had agreed with the Argentine government to reduce the large state subsidies to energy companies, with the aim of gradually reducing the fiscal deficit – which will increase the burden 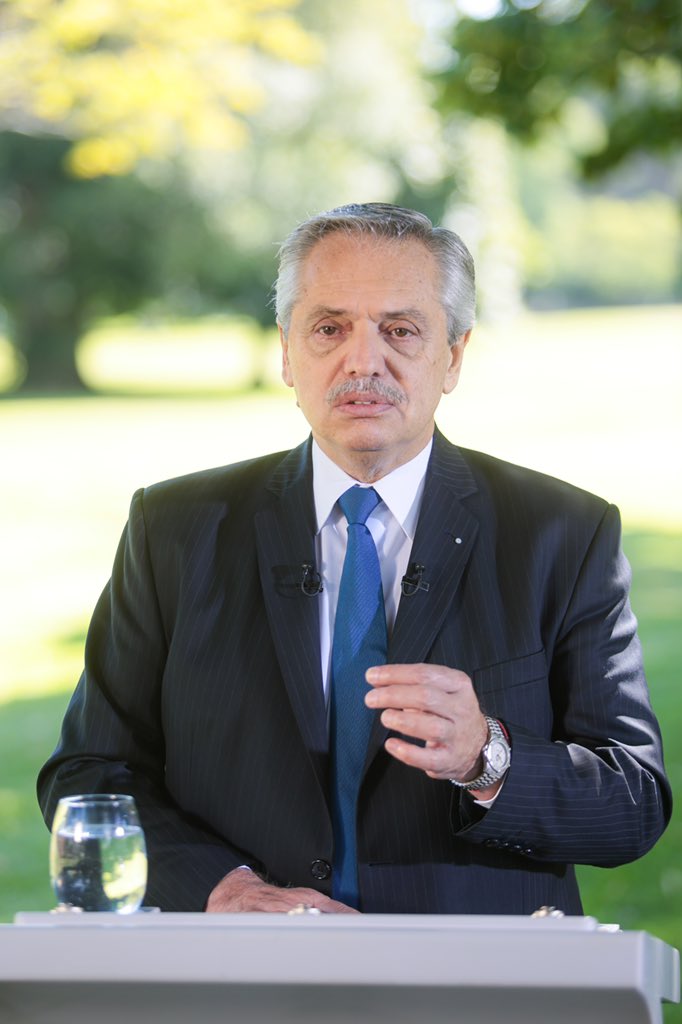 Argentine President Alberto Fernández announced on Jan. 28 the agreement with the International Monetary Fund which, he said, took “the noose off the country’s neck”. CREDIT: Casa Rosada

Between realism and skepticism

Although the agreement was described as positive by most economists and even by the opposition, it sparked an internal crisis in the government, with one wing believing that the negotiation was too soft.

The clearest sign of the crisis was the resignation of Máximo Kirchner (son of former president and current vice-president Cristina Fernández Kirchner) as president of the ruling party’s bloc in the Chamber of Deputies, with a letter in which he stated that the IMF has been “the key trigger for every economic crisis since the return of democracy” in Argentina in 1983.

On the street, skepticism prevailed. In response to questions from IPS, the most frequently heard comment was that this news will not change anything for ordinary people, who see inflation as their main daily problem and believe it will continue to be so.

Juan Galíndez, who commutes almost two hours a day from a poor suburb of Buenos Aires to the city center to watch over cars parked outside a club, told IPS: “I don’t care about the IMF agreement because I know it won’t change anything for me. As long as I can get a few pesos to live on, I’m fine.” Galíndez works in the informal economy and depends on tips from customers of the club.

The plight of the poor in Argentina, however, is cushioned by a strong social assistance scheme that benefits almost 45 percent of the population in its various forms.

“Argentina has had a decade of economic stagnation and 30 years of a more structural deterioration,” Agustín Salvia, director of the Social Debt Observatory at the private Argentine Catholic University (UCA), told IPS. “Since 2018, what we have seen is a debt crisis to which the pandemic was added and this had very harsh consequences: it raised poverty levels from 35 to 48 percent at its peak, in 2020.”

The expert said that as of 2021, when the COVID vaccines began to arrive, restrictions on movement were relaxed and a process of economic recovery began, and poverty decreased although it has not returned to pre-pandemic levels. 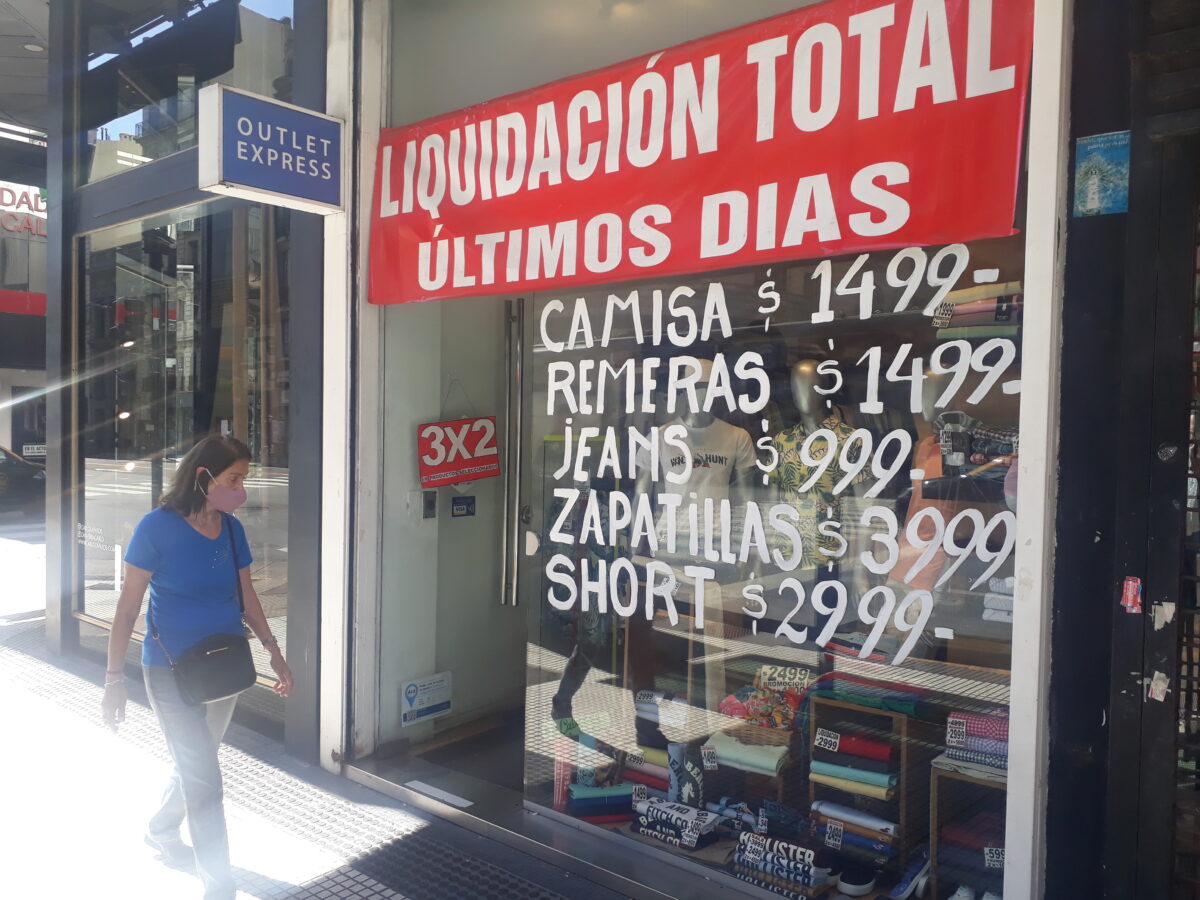 “It stabilized at around 40 percent, because there is little investment from small or large companies that generate quality employment. What is growing the most is precarious informal work, with low wages that lose against inflation, and self-employment,” said Salvia.

The inflation that hits the poor especially hard is fundamentally driven, according to economists, by a fiscal deficit that in 2021 reached three percentage points of gross domestic product (GDP) and that is difficult to lower without social costs, in a country that spends 40 percent of its budget on pensions and other social security benefits.

In the understanding with the IMF, a path of progressive reduction of government spending was established, which postpones the zero deficit goal until 2025, in the next presidential term, which begins in December 2023.

“The agreement imposes some conditions of course, but this time the IMF is not demanding structural reforms that affect pensions or labor rights, as it has in the past, which means that they are a little more lax,” said economist Martín Kalos.

Kalos told IPS that reducing the fiscal deficit was a path that Argentina was going to have to go down with or without IMF surveillance: “While no country likes to be audited on its sovereign policy decisions, this was an agenda that Argentina was not going to be able to escape.”