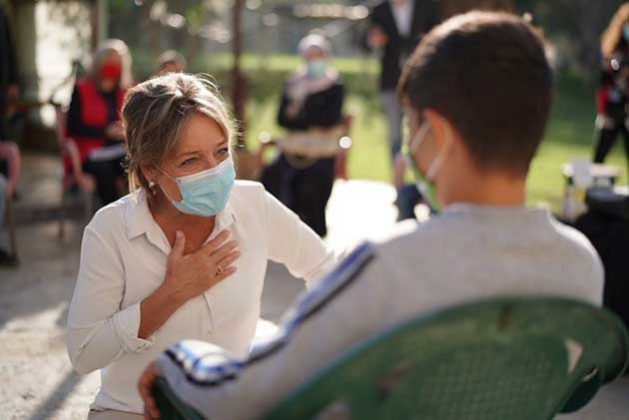 Nairobi, Kenya, Feb 16 2022 (IPS) - Unable to walk, see or hear, and without assistance, the multiple barriers between 240 million children with disabilities and the education system mean nearly half are likely never to have attended school.

“We must reach these children with the fierce urgency of now,” says Yasmine Sherif, Director, Education Cannot Wait, speaking at the Global Disability Summit.

In emergencies and protracted crises in countries like Afghanistan, Bangladesh, Chad, Lebanon, Syria, and many more, Sherif says, “No one is left furthest behind and more vulnerable than a refugee or forcibly displaced child with disabilities.”

At the Global Disability Summit, hosted by the International Disability Alliance (IDA) and the governments of Norway and Ghana, on February 16-17, 2022, Sherif spoke about the harsh reality challenges faced on a daily basis by crisis-affected children with disabilities within current education systems and the urgent need to intervene.

She urged the global community to be concrete in action and not abstract in thinking, calling for a collective response for children with disabilities caught in armed conflicts, forced displacement, climate-induced disasters, and protracted crises. Their inclusion in response and protection interventions need to be systemized through legal frameworks and leveraging on pooled funding.

“Being the only global fund for education in emergencies and protracted crises, ECW cannot accomplish its mission unless all children with disabilities can learn in an inclusive and protected setting along with their peers,” she says.

“Nor will we collectively ensure the right to inclusive, equitable, and quality education for every child if children with disabilities remain behind.”

ECW commits to ensuring that its partners and grantees embed inclusion standards in their investments and act upon them.

“More specifically, ensuring that families of children with disabilities and organizations of persons with disabilities are engaged throughout each programme cycle with adequate budgetary allocation to support and sustain participation. This includes enhancing accountability to the affected population,” she says.

For disability rights groups, activists, experts, and supporters, the ongoing Summit is key in highlighting that the time to make education in emergency and protracted crises settings inclusive is now.

The Summit is pivotal in ensuring that governments, UN entities, and civil society back their commitments to persons with disabilities with adequate resources to implement them.

Also in attendance were Johanna Sumuvuori, State Secretary Minister for Foreign Affairs of Finland, and Nujeen Mustafa, a UNHCR Supporter who, at 16, traveled 3,500 miles from Syria to Germany in a steel wheelchair; her compelling story captured in the book ‘Nujeen, One Girl’s Incredible Journey from War-Torn Syria in a Wheelchair’.

Hadad opened with astounding statistics indicating that 41 million people with disabilities would need humanitarian assistance in 2022.

Against this backdrop, Triggs emphasized respect for those displaced by conflict, including internally displaced persons and refugees. She affirmed that disability inclusion remains a priority for UNHCR and that the UN Refugee Agency is firmly committed to doing more to achieve it.

Maurer confirmed that the International Committee of the Red Cross is seriously taking on board the philosophy of inclusion in their humanitarian work, and more so, in conflict situations. 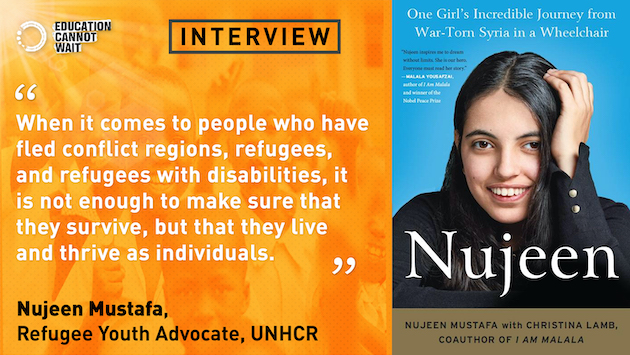 Nujeen Mustafa, a UNHCR Supporter who, at 16, traveled 3,500 miles from Syria to Germany in a steel wheelchair says active participation of children with disabilities is “not a favor but a right”.
Credit: Education Cannot Wait

Mustafa explained she was born with cerebral palsy in Syria, and as a result, society saw a girl without a future. She said conflict situations further exposed the lack of infrastructure, support, and protection for people with disabilities.

Quinn called for increased visibility for persons with disability, saying that war is not a thing of the past because conflicts were very much alive.

The character of conflict was changing, but it has not gone away. It has become more lethal for those with disabilities, Quinn says.

“This leaves people with disabilities at even greater risk of violence and discrimination. Demand for active and meaningful participation is not a favor but a right for all people living with disabilities,” Mustafa told a community of global participants.

Sherif noted that disability inclusion for children in emergencies and protracted crises requires the removal of economic barriers.

Sherif stresses that families of children with disabilities bear extra costs to send them to school, including transportation and assistive devices.

“Families, therefore, may not afford to send their children to school or may not see the need for it because of widely shared negative attitudes toward children with disabilities and their potential,” Sherif says.

Once children with disabilities in emergencies and protracted crises go to school, says Sherif, they often must overcome inaccessible pathways and navigate schools and temporary learning spaces that are not accessible. Accessible transportation and assistive devices are usually not provided in these contexts.

Without training and support for teachers to adapt the teaching and learning environment to the special needs of vulnerable learners, children with disability struggle to learn the basics. More often than not, few enter higher learning and training.

Sherif says that quality and safety start with inclusion, ensuring that children with disabilities learn along with their peers.

“Ensuring quality education in an inclusive setting necessitates knowledge and capacities, adapted curricula, and targeted interventions such as the provision of specialized material and equipment,” Sherif emphasizes.

“In emergencies and protracted crises, where resources are often scarce, it is fundamental to leverage local resources through partnerships between school personnel and families.”

Sherif concluded by saying it is possible to intervene and maintain educational systems even in the aftermath of conflict to ensure that future generations can escape the cycle of poverty.