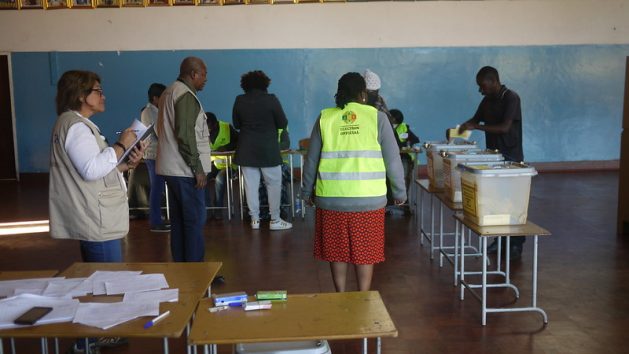 There is a fear that the crackdown on NGOs in Zimbabwe could impact the observer status during the upcoming election. Other areas that could be affected include access to sexual reproductive health, food aid, and education. This picture was taken during the 2018 elections. Credit: Commonwealth Observer Mission

Bulawayo, ZIMBABWE , Mar 22 2022 (IPS) - Zimbabwe is pressing ahead with a controversial bill that critics say seeks to criminalise the operations of nongovernmental organisations working in the country.

According to senior government officials, amendments to the Private Voluntary Organisations Act is designed to stem illegal money coming into the country under the guise of NGO funding but is allegedly used to push political agendas and political lobbying.

The country’s ruling party, the Zimbabwe African National Union (Patriotic Front), has been suspicious of NGOs, routinely accusing them of working with hostile foreign countries to push what it calls a “regime change agenda”.

In recent days, members of the public have been invited by parliament to share their views on the proposed amendments, but violent interruptions have marred these public gatherings by what rights groups say are ruling party activists eager to see the bill passed into law.

This comes as a senior government official, Larry Mavima, said in early March that the country does not need NGOs as Zimbabwe was not at war, advising that NGOs should “go to Ukraine” where their services are needed.

“How long should we continue relying on other people? There was a time when NGOs were necessary, but we to get out of this mentality,” Mavima told a public gathering in the country’s Midlands province devastated by cyclical droughts and where humanitarian needs continue to grow.

The remarks were quickly met with widespread condemnation from the humanitarian sector in a country where millions of people survive on NGO assistance, including sexual reproductive health, food aid and education.

According to the United Nations Office for the Coordination of Humanitarian Affairs, before the emergence of Covid-19, more than 7 million people in both rural and urban areas required food assistance, with the World Food Programme noting that the numbers grew with poor harvests during the 2020-21 and 2020-22 cropping seasons.

However, there are concerns about the proposed amendments of the law timing on the eve of elections slated for 2023.

NGOs involved in civic education have especially been targeted with a government minister alleging that the public, voluntary organisations working, especially in the rural areas, were straying from their mandates and politicising villagers.

“The banning of NGOs will have a bearing on the upcoming elections because it will undermine the ability of civic society organisations to observe, cover and monitor the elections,” said Carine Kaneza Nantulya, Human Rights Watch Africa Advocacy director.

“Active NGOs and civil society organisations are fundamental to an open, free, and democratic society because of the role they play in protecting and promoting human rights and the rule of law. The PVO Act amendment is a disturbing development that takes place against the backdrop of a broader crackdown on civic space in Zimbabwe.” Nantulya told IPS by email.

This is not the first time Zimbabwe has escalated efforts to muzzle NGOs.

The announcement was met swift protests from civic society groups who challenged the directive in court and won, with a high court judge questioning the legality of such demands.

The attempts to muzzle the NGOs also attracted international attention. The Robert F. Kennedy Human Rights added its voice and issued a statement calling on the Zimbabwean government to “stop interfering with NGO operations.”

NGO groups have indicated they will challenge the amendment of the PVO Act in court if passed into law.

A joint report, authored by the Southern African Human Rights Defenders Network, the Zimbabwe Human Rights NGO Forum and the Accountability Lab Zimbabwe, looked into the possible economic impact of the PVO amendment bill. The report, released in February, raised concerns about the far-reaching impact of outlawing NGO work in Zimbabwe.

“Any disruptions in NGO activities and ﬁnancing will likely worsen the poverty situation and threaten the development gains that have been made to date. Importantly, in Zimbabwe, there has been no instance of terrorist ﬁnancing in the NGOs sector,” the researchers wrote.

“The country’s economic situation, human development indices, and progress towards meeting SDGs show that the country needs all the help it can get,” McDonald Lewanika, lead of Accountability Lab Zimbabwe, told IPS.

“The fears around NGOs supporting materially political parties are unfounded in this environment where there has been donor flight and fatigue and where some NGOs have lost funding from big donors on suspicion of the same. It is not in the interest of NGOs to be partisan,” Lewanika said.

Zimbabwe had in the past made numerous calls for assistance, so it is not clear what has changed now for the authorities to declare NGOs are no longer welcome.

“No country can claim that it doesn’t need NGOs, when we know that NGOs, especially in Zimbabwe, are at the forefront of service delivery for communities. For instance, women and reproductive rights and HIV AIDS organisations provided critically needed services to the communities,” Nantulya said.