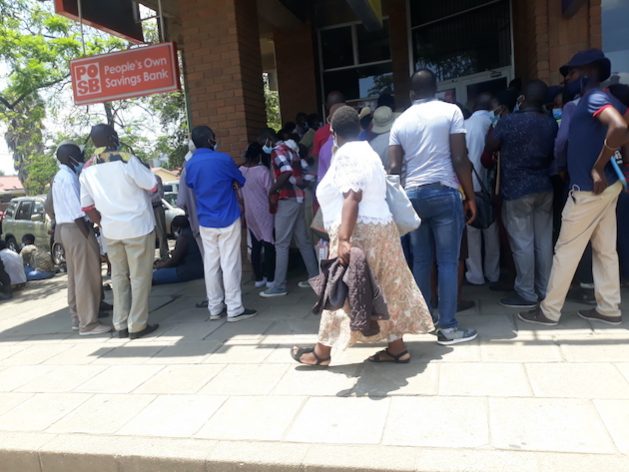 People take time to go to the bank, but not to register to vote. Lower voter turnout and registration are a cause for concern in Zimbabwe. Credit: Ignatius Banda/IPS

Bulawayo, Zimbabwe, Mar 31 2022 (IPS) - Activity in the streets of Zimbabwe’s second city is testimony to a thriving informal sector where thousands of people eke out a living selling all sorts of wares.

From vegetables to soft drinks to television sets, mobile phones and anything in-between, all are peddled here, where being self-employed means putting in more hours to ensure food on the table.

It is here where 41-year-old Gilbert Mabutho works as an itinerant vendor, peddling whatever commodity he can sell. Today he is selling boiled maize (corn) because he says, “maize is in season.”

“There are no jobs. This is where my bread comes from,” Mabutho told IPS.

Amid the hustle and bustle, Mabutho is among many who have not taken time off their daily grind to register to vote or check their names in the voter’s roll ahead of the forthcoming primary elections.

“I haven’t had time to register. I am just too occupied trying to make ends meet,” Mabutho said.

By-elections, considered harbinger of the country’s 2023 elections, were held earlier this month, and analysts are raising concerns about the low response to voter registration and participation.

Yet besides being too busy to make time for voter registration, residents such as unemployed Samson Basvi say they do not see any benefit in voting.

“The country’s hardships have been going for years now, showing me no reason to vote,” Basvi told IPS.

“If voting truly changed anything, surely the people who are voted into power would improve our lives,” he reasoned, expressing a common sentiment here, where the ruling Zimbabwe African National Union (Patriotic Front) (ZANU-PF) has been in power since 1980.

According to the Zimbabwe Electoral Commission, the country’s second-largest city has the lowest number of registered voters.

In the 2018 elections, where President Emmerson Mnangagwa claimed disputed victory, about three-quarters of about 5.5 million registered voters cast their vote – which was considered a high turnout.

“It is not clear yet if voter turnout in the by-elections is an indicator of the 2023 polls,” said Piers Pigou, southern Africa analyst at the International Crisis Group.

Analysts note that a lack of trust in electoral processes has led to voter apathy.

“The prime cause for apathy is fears of a possible rigging of elections in favour of the ruling ZANU-PF, a long-standing sentiment among voters,” said Stanley Mabuka, an analyst at the Economist Intelligence Unit (EIU).

The Zimbabwe Electoral Commission (ZEC), a government-appointed body tasked with running the country’s elections, has also been criticized for what is seen as poor voter education and voter registration campaign, with some residents claiming they have not heard about voter verification or registration.

Zimbabwe has for years witnessed a cycle of disputed election outcomes, with opposition political parties accusing the ruling party of manipulating electoral processes. At the same time, some observer missions raised concerns about the credibility of the 2018 poll results.

“You then have people registered to vote but don’t vote because of despondency that elections have not been delivering the kind of lifestyle they desire,” Ncube told IPS.

The ruling party says it is targeting 5 million votes in the 2023 elections, while the Citizens for Change Coalition (CCC), led by Nelson Chamisa, says it is targeting 6 million voters. But with the current pace of voter registration and the inspection of the voter’s roll expected to pour into 2023, there is little to show that either party will garner such numbers.

By-elections were called to fill vacant municipality and legislative seats, but some analysts note that by-elections have generally attracted few voters, a phenomenon seen across the continent.

“There is usually less interest in by-elections, but there is also the issue of young people who have turned voting age who are failing to get registration documents that will allow them to vote,” said Pigou.

“Low voter participation has been a general trend across the region (southern Africa), and this has been particularly the case with younger people,” Pigou told IPS.

More is required to be done if voters are to be convinced of a “possibility of change spearheaded by a democratic opposition,” says Stephen Chan, a professor of world politics at the University of London’s School of Oriental and African Studies who has written extensively about Zimbabwe.

“By and large, by-elections attract a low turnout around the world. In Zimbabwe, however, there are added factors of disillusionment with the fragmentation of the opposition and the sense among voters that ZANU-PF is at this point not able to be dislodged from power,” Chan told IPS.