Food Systems Should Deliver Benefits in terms of Climate, Health and Society 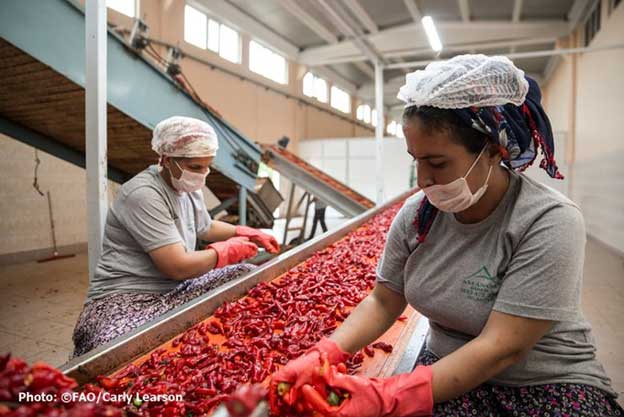 CAPETOWN, South Africa, Apr 13 2022 (IPS) - Which country do you think best recognises the potential for changes to food systems to reduce emissions? Presumably a developed country, where agriculture is predominantly intensive, heavily subsidised and fuelled by fertilisers and irrigation, and where high consumption of animal proteins is the norm?

Not so, – as we found when we analysed the national climate plans for 14 countries, including the US, UK, China, Senegal and Bangladesh, in partnership with the Global Alliance for the Future of Food.

Perhaps counter-intuitively it was Colombia and Kenya that stood out from the other countries as having submitted plans to the UN climate talks that best took into account the potential for food systems reform to drive down greenhouse gas emissions, and deliver a range of other benefits including improved health and livelihoods, enhanced food security, better gender equality, and wider environmental gains such as clean water and nature recovery.

Conservative estimates suggest that changing the way we produce and consume food could reduce global greenhouse gas emissions by at least 10.3 billion tonnes a year – 20% of the cut needed by 2050 to keep global warming below 1.5 degrees Celsius and – hopefully – prevent catastrophic climate change.

And yet, none of the countries whose ‘nationally determined contributions’ or NDCs we analysed are currently doing enough to realise the myriad opportunities.

For example, none of the country plans we analysed include specific measures on changing diets, even though this has the potential to reduce emissions by nearly a billion tonnes a year, as well as provide associated health and other environmental benefits.

China’s plan does include a target to promote ‘green and low-carbon lifestyles’, but it does not clarify whether this includes sustainable and healthy diets.

Meanwhile, Germany is the only country that commits to move away from harmful subsidies that prop up intensive agriculture, contribute to higher emissions and degrade nature.

Similarly, none of the countries we looked at fully account for emissions from food imports, particularly those linked to deforestation and the destruction of ecosystems, in spite of commitments made at the last UN climate meeting to end and reverse deforestation by 2030.

Food loss and waste is another big gap in most of the country plans we reviewed. One-third of all food produced in the world – approximately 1.3 billion tonnes – is lost or wasted every year.

But France is the only country whose NDC includes comprehensive measures to reduce it. China passed an anti-food-waste law last April, accompanied by a large-scale “clear your plate” campaign but this is not yet reflected in its NDC.

Globally, women play a central role in food production and children’s nutrition, so any efforts to meaningfully reform food systems to reduce emissions must engage them. Vanuatu, Canada, Kenya and Senegal have all made efforts to ensure their NDCs are gender inclusive.

In contrast, the UK only includes a general reference to ‘gender equality’ and China and the US fail to specifically mention women as a key stakeholder group.

Colombia, Senegal, and Kenya have the most ambitious measures in place to promote more agroecological and regenerative locally-led agriculture, which is less emissions intensive and good for sustainable livelihoods and equality.

Colombia’s plan includes measures to reduce emissions from cocoa, coffee, and sugar production, as well as from livestock including through sustainable management, restoration of degraded grazing areas, and energy generation from waste. In addition, the NDC includes measures to strengthen local agricultural capacities through training and workshops.

Colombia’s NDC also sets out measures to protect, conserve, and recover natural resources and ecosystems as well as strengthen its protected areas. Specifically, the NDC includes commitments to restore, rehabilitate, or recover 18,000 hectares of degraded land in protected areas; conserve paramos, watersheds, mangroves, and seagrass fields; and promote the conservation and restoration of natural ecosystems that have been used for cattle.

The Colombian NDC acknowledges the importance of engaging with smallholders and local communities, and the central role of Indigenous and Afro-Colombian communities in preserving the country’s forests.

The involvement of rural communities is seen as essential for transforming agricultural practices, avoiding the expansion of the agricultural frontier, and safeguarding the country’s food security.

Meanwhile, Kenya’s NDC identifies agriculture as one of the sectors most vulnerable to climate change, and also as a key to meeting ambitious adaptation and mitigation targets. It promotes ‘climate smart’ agriculture that sustainably increases productivity, resilience, reduces or removes greenhouse gases, and enhances the achievement of national food security and development goals.

The strategy unites agriculture, development, and climate change and emphasises the need for good coordination.

Kenya’s NDC aims to build the resilience of the agricultural system through the sustainable management of land, soil, water, and other natural resources as well as insurance and other safety nets; and to strengthen communication systems on climate-smart agriculture extension services and agro-weather issues.

The plan also includes measures to build climate resilience for marginalised communities by developing social safety net structures for women, youth, and other vulnerable groups. It promotes access for these groups to enterprise funds, climate finance and credit lines.

There are ways in which both Colombia and Kenya can improve their plans, for example by strengthening commitments on nutritious and sustainable diets. They, along with all the other signatories to the UN process, have the opportunity to do this ahead of the next big UN meeting in Egypt later this year.

The toolkit we have developed with the Global Alliance gives governments the guidance they need to improve the process, content and implementation of their NDCs to realise the huge benefits of food systems reform for the environment, society and the economy. With food prices rocketing and climate change already hitting people hard, there is no time to lose.

Karin Kleinbooi is a Senior Programme Manager at Solidaridad Eastern, Central and Southern Africa. Solidaridad is a civil society organisation that works throughout the whole supply chain to make sustainability the norm and enable farmers and workers to earn a decent income, produce in balance with nature, and shape their own future. Karin is responsible for facilitating policy advocacy through multi-stakeholder platforms with various actors (including farmers, CSOs, the private sector, Government and regional institutions). She currently focuses on value chain transparency, food systems transformation, and creating enabling environments for sustainability.