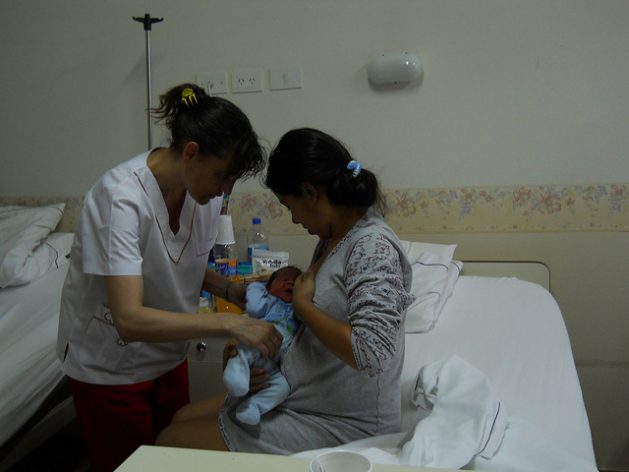 Adequate maternal care during pregnancy, childbirth and the postpartum period is essential to curbing the high maternal mortality rates in Latin America, which stopped falling due to women's health care problems during the COVID pandemic. CREDIT: Government of Tigre / Argentina

RIO DE JANEIRO, May 27 2022 (IPS) - Brazil had the dubious distinction of champion of maternal mortality in Latin America during the COVID-19 pandemic, with a 77 percent increase in such deaths between 2019 and 2021.

A total of 1,575 women died in childbirth or in the following six weeks in the year prior to the pandemic in Latin America’s largest and most populous country, with a population of 214 million. Two years later the total had climbed to 2,787, according to preliminary data from the Health Ministry’s Mortality Information System.

In Mexico, the second-most populated country in the region, with 129 million inhabitants, the increase was 49 percent, to 1,036 maternal deaths in 2021. And in Peru, a country of 33 million people, the total rose by 63 percent to 493 maternal deaths.

In Colombia, recent data are not available. But authorities acknowledge that in 2021 COVID-19 became the leading cause of maternal deaths, as it was in Mexico.

Brazil is the extreme example of multiple mistakes and of stubborn denialism that led to many avoidable deaths, particularly of pregnant women, according to experts and women’s rights activists on the occasion of the International Day of Action for Women’s Health, celebrated May 28.

These levels, the agency adds, will delay reaching target 3.1 of the 17 Sustainable Development Goals (SDGs): to reduce the global maternal mortality ratio to less than 70 per 100,000 live births by 2030.

A woman takes part in a care program for pregnant women in a low-income area of the northern state of Pará, Brazil. PAHO warned that the disruption of health services caused by COVID drove up maternal mortality rates in Latin America and the Caribbean. CREDIT: UNFPA

“Inadequate prenatal and obstetric care,” largely due to inadequate medical training in these areas, is the cause of the tragedy in Brazil, said physician and epidemiologist Daphne Rattner, a professor at the University of Brasilia and president of the Network for the Humanization of Childbirth.

“Hypertensive syndrome is the main cause of death in Brazil, while in the world it is hemorrhage. In other words, there is some failure in a simple diagnosis like hypertension and in managing it during pregnancy and childbirth,” she said in an interview with IPS from Brasilia.

Of the 38,919 maternal deaths between 1996 and 2018 in Brazil, 8,186 were due to hypertension and 5,160 to hemorrhage, according to a Health Ministry report. These are direct obstetric causes, which accounted for just over two-thirds of the deaths. The rest had indirect causes, pre-existing conditions that complicate childbirth, such as diabetes, cancer or heart disease.

An excess of cesarean sections is another factor in mortality. It is “an epidemic” of 1.6 million operations per year, the Health Ministry acknowledges. This is equivalent to about 56 percent of the total number of deliveries. The proportion reaches 85 percent in private hospitals and stands at 40 percent in public services, well above the 10 percent rate recommended by the WHO.

“They don’t practice obstetrics, they practice surgery, they don’t know how to provide clinical care, and the result is more maternal deaths,” Rattner lamented.

And the pandemic made the situation more tragic. 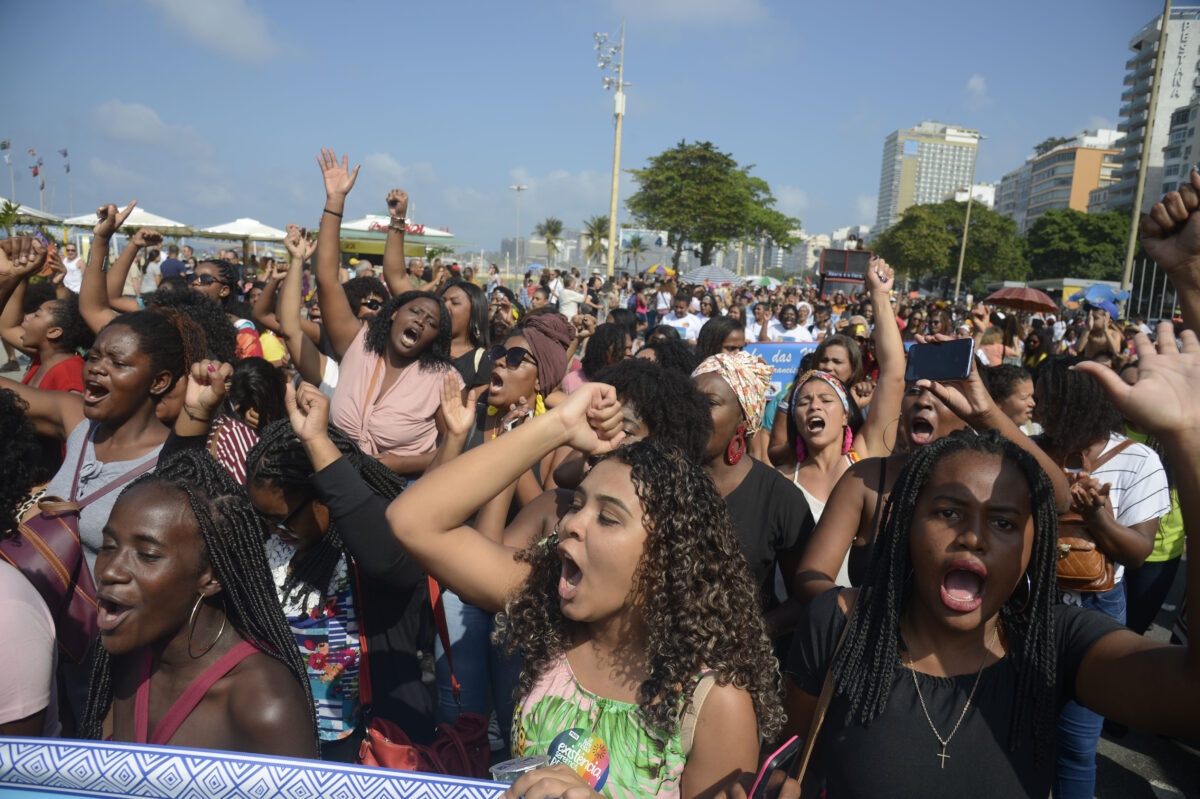 Black women protest to demand respect for their rights in Brazil. Black women are the greatest victims of maternal mortality caused by COVID-19 in the country. They account for almost twice the number of deaths of white mothers, according to a study by the Oswaldo Cruz Foundation, the leading national health research institution. CREDIT: Fernando Frazão / Agência Brasil

Brazil missed the target of reducing maternal mortality by 75 percent by 2015, from 1990 levels, but it was moving in that direction. The maternal mortality ratio (MMR) per 100,000 live births in the country fell from 143 to 60, a 58 percent drop.

The Stork Network, a government strategy adopted in 2011 to improve assistance to pregnant women and the infrastructure of maternity hospitals, humanize childbirth, ensure family planning and better care for children, helped bring the MMR down.

But COVID-19 and the government’s response to it caused a setback of at least two decades in Brazil’s maternal mortality rate.

Coronavirus killed more than 2,000 pregnant and postpartum women in the last two years and there are at least 383 other deaths from severe acute respiratory syndrome that may have been caused by COVID-19, according to the Feminist Health Network, an activist movement that has been fighting for sexual and reproductive rights since 1991.

The way the government of far-right President Jair Bolsonaro acted “was a maternal genocide, not just a disaster,” said Vania Nequer Soares, a nurse with a PhD in public health who is a member of the Feminist Health Network.

The government’s denialism and its response to the pandemic aggravated mortality in general, which already exceeds 666,000 deaths, as well as maternal mortality. Health authorities took more than a year to recognize that pregnant women were a high-risk group for COVID-19, made it difficult for them to receive intensive care and delayed their vaccination, Soares said.

To make matters worse, they decided to dismantle the Stork Network, whose public policies had promising results, and adopted new rules of “obstetric violence” included in the brand new Maternal and Child Care Network (Rami), which concentrates all power in doctors and hospitals, to the detriment of other actors and dialogue, she told IPS by telephone from Lisbon. 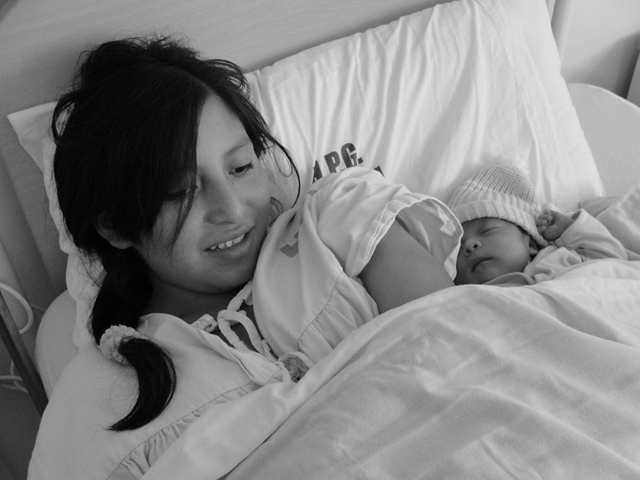 Miriam Toaquiza, a teenage mother, and her newborn daughter, Jennifer, are photographed at a hospital in Ecuador. Latin America is second in the world in teen pregnancy, one of the causes of the high maternal mortality rates in the region. CREDIT: Gonzalo Ortiz/IPS

But the numbers of maternal deaths are probably higher. Brazil was slow to begin using COVID-19 diagnostic tests and did not test widely. And because clinical identification of the new disease was doubtful, many mothers probably died without the correct diagnosis, especially in the first year of the pandemic, Rattner argued.

A study published this month in the scientific journal The Lancet Regional Health – Americas, with accounts from the families of 25 pregnant women who died of COVID-19, revealed three practices that condemned many women to death on the verge of childbirth.

First, doctors refused to hospitalize or better examine those who complained, for example, of difficulty breathing. They attributed it to late pregnancy and delayed a diagnosis that could have saved at least one life.

Finally, pregnant women who managed to be accepted in hospitals were denied intensive care, under the argument of protecting the baby’s life. In other words, the choice was made to save the child, to the detriment of the mothers, without consulting the families.

This was confirmed by the fact that all 25 pregnant women died, but 19 babies survived. Four families told the health professionals that they wanted the mother to be saved, even arguing that she could have other children in the future, but this proved to be in vain.

The study by three researchers from the Anis Institute of Bioethics, Human Rights and Gender, based in Brasilia, corroborates the complaint of the Feminist Health Network that 20 percent of the pregnant and postpartum women did not have access to intensive care and 32.3 percent were not put on ventilators.

Women must be given protagonism, so that “they can take ownership of the process of motherhood, including childbirth,” said Ligia Cardieri, a sociologist who is executive coordinator of the Feminist Health Network.

Fewer mechanical interventions, a reduction of c-sections that increase risks, including anesthetics, and greater involvement of nurses and other maternal health actors are other recommendations to avoid so many maternal deaths, she told IPS from Curitiba, capital of the southern state of Paraná.

In other Latin American countries, pregnant women with COVID-19 suffered a similar lack of attention and problems.

Nearly a third of them were not given intensive care or respiratory support during the pandemic, revealed a study of 447 pregnant women from eight countries, including five from South America, two from Central America and one from the Caribbean, according to PAHO data.

The study, published in The Lancet Regional Health – Americas, is from PAHO’s Latin American Center for Perinatology/Women’s Health and Reproductive Health (CLAP/WR).