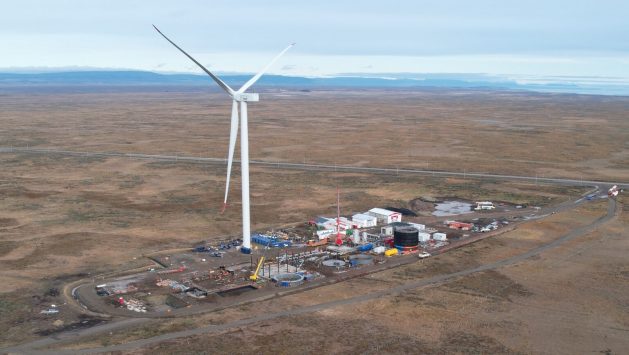 At the Haru Oni demonstration plant where the ecological fuel based on green hydrogen will be produced, the wind turbine that will provide wind energy to the project promoted by the HIF Global group in the southern Chilean region of Magallanes has been installed. CREDIT: HIF Global

SANTIAGO, Jun 13 2022 (IPS) - Patagonia’s strong winds are driving projects that will place Magallanes, in the extreme south of Chile, in a privileged position to produce and export green hydrogen and help the country move towards carbon neutrality.

The projects underway aim to produce green fuel to replace gasoline in any vehicle, competing with the efficiency of electromobility. Another goal is to produce green ammonia to replace, for example, the 350,000 tons of gray ammonia that Chile imports for the large copper mines in the north of the country.

President Gabriel Boric said on Jul. 8 at the IV Business Summit of the Americas in Los Angeles, California, that Chile “is going to bet heavily on green hydrogen, both the State and the private sector.”

He encouraged U.S. businesspeople to invest in Chile while “linking production chains and raising environmental standards.”

“In the Patagonian region alone, if we do things right, the potential is enough to supply 13 percent of the world’s demand for green hydrogen,” said Boric, a native of Punta Arenas, the capital of the Magallanes region, popularly known as Chile’s Patagonia.

Julio Maturana, undersecretary of energy, told IPS that it is essential that green hydrogen be developed in harmony with Chile’s territories and ecosystems.

“We will push for hydrogen to be at the base of the creation of industry, and for Chile to participate in the entire value chain, including technological innovation,” he said.

Maturana said that the government is promoting studies to identify the greatest comparative advantages, “pushing for more sustainable mining, green fertilizers, green steel, zero-emission maritime and aviation fuels, or manufacturing processes so that Chile can add value not only with its winds in Magallanes and the desert sun, but also with its workers, universities and industry.”

According to the undersecretary, when the National Green Hydrogen Strategy was launched two years ago, there were 20 projects submitted – a number that has since risen threefold. 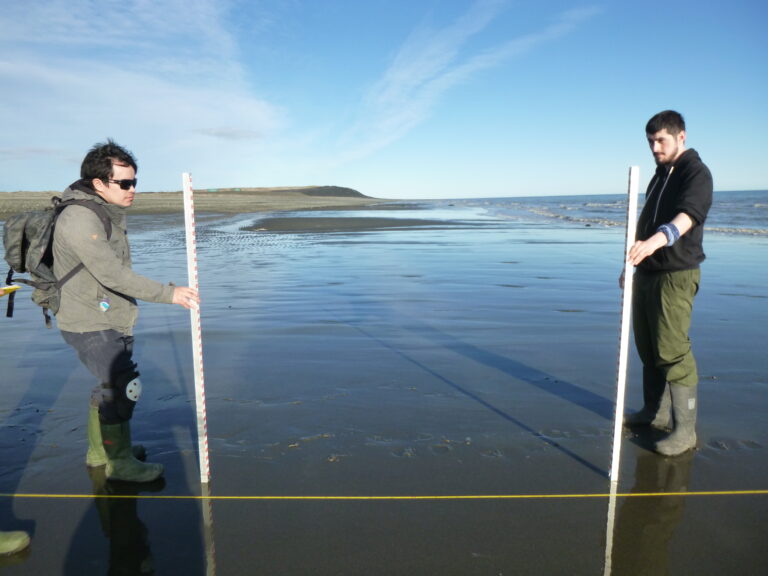 Characteristics of the green hydrogen boom

Green hydrogen is obtained by electrolysis using only electrical energy from clean, renewable sources such as wind or sun.

Of all the hydrogen produced in the world today, 95 percent is gray hydrogen obtained using natural gas, oil or coal, which causes the emission of large quantities of carbon dioxide (CO2), a major driver of global warming.

The use of electricity represents almost 70 percent of the cost of producing green hydrogen, which is why Chile is in a privileged location due to its enormous solar radiation potential in the northern Atacama Desert and the strong winds in the southern Patagonia region.

Magallanes is exceptionally windy because of the clash of high pressure systems caused by the Pacific anticyclone, which runs from Ecuador to Patagonia, and the low pressures and cold air masses originating from the polar front coming from Antarctica.

In 2019 Chile’s energy mix included 44 percent renewables. It is estimated that by 2030 renewables will make up 70 percent of the mix and that by 2050 the proportion will climb to 95 percent, as part of an energy transition that in addition to decarbonizing energy aims to free the country from costly hydrocarbon imports.

Producing a kilogram of green hydrogen today costs six dollars, but Undersecretary Maturana said that “Chile has the technical conditions to achieve production costs of less than a dollar per kilo.”

This would be important for bringing the cost of green hydrogen closer to that of fossil fuels, while now it is four times more expensive.

“To bring the price down, a series of measures will be required to provide certainty, access to financing and the promotion of a market or critical mass of local demand,” said the undersecretary. 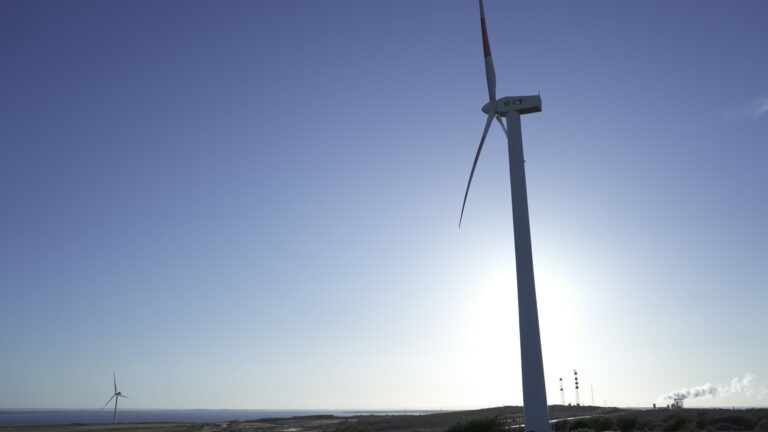 Wind towers near Punta Arenas, capital of the Magallanes region, one of the best areas in the world for producing wind energy because a turbine can operate for more than 5,000 hours a year, according to Daniele Consoli of Enel Green Power, which is promoting the Haru Oni green hydrogen project in Chile’s southern Patagonia region. CREDIT: Ministry of Energy

A wind turbine has already been installed in Magallanes, part of an assembly platform built north of Punta Arenas at the Haru Oni demonstration plant.

The project, the first phase of which involves an investment of 51 million dollars, is being promoted by the international consortium HIF Global which, in parallel, will build a plant to produce green hydrogen that will then be treated to produce green gasoline.

“Little by little our project is taking shape and this turbine is a fundamental part of it,” said Clara Bowman, general manager of HIF Global, a company with 80 percent Chilean capital as well as the participation of German and U.S. firms.

“In parallel, in various places around the world, such as China, Germany and the United States, the equipment that will allow us to produce carbon-neutral eFuel is already being manufactured. We are working to start operations during the second half of this year,” explained the manager of the company, whose name is the abbreviation of Highly Innovative Fuels.

The French company Total Eren is developing the H2 Magallanes Project in the municipality of San Gregorio, near Punta Arenas, which will have up to 10 GW of installed wind power capacity and up to eight GW of electrolysis capacity, in addition to a desalination plant and an ammonia (NH3) production plant.

“The timeframe puts the start of the construction phase in 2025, and it is projected that by 2027 the first green hydrogen units could be operating,” said Macarena Toledo, environmental and social director of the H2 Magallanes Project.

The estimated investment is 20 billion dollars, she told IPS.

The Environmental Studies Group at the University of Magallanes is preparing the project’s environmental impact study, which includes variables of soil, water, fauna, flora, relief and strategies to inform the community about wind turbines and green hydrogen.

Claudio Gómez, dean of engineering at the university, told IPS that green hydrogen has unleashed “an explosive process that involves a revolution in the education of engineers, who must have a new kind of training to face new challenges.”

A sign reads “Welcome to the municipality of San Gregorio” in the extreme south of Chile, where the H2 Magallanes project is conducting environmental impact studies before starting construction of its project, the initial phase of which is scheduled for 2025. CREDIT: Total Eren

A cleaner future, not just on paper

The carbon-neutral fuel produced by Haru Oni will be tested in vehicles of the German brand Porsche, which is part of the consortium. The projection is that seven million cars will have green hydrogen cells by 2030 in China, Japan, the United States and South Korea.

The big goal is for green hydrogen to be incorporated into large trucks and machinery in mining, industrial sectors such as steel mills, refineries, fertilizer and ceramics factories, and ships and airplanes.

On Jun. 6, a group of companies launched a project to make Pudahuel International Airport, which serves the capital city of Santiago, the first in Latin America to use green hydrogen.

The group, which includes the company that manages the airport, will evaluate the development of a hydrogen ecosystem, including production and fueling infrastructure to serve the airport complex’s ground operations, as well as aircraft in the future. 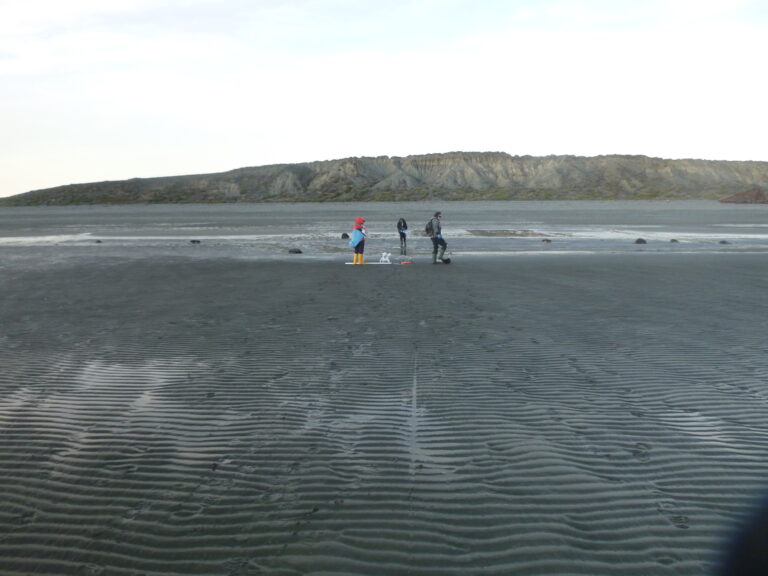 The key role of the State

Undersecretary Maturana stressed that the Boric administration, in office since March, wants the state-owned National Petroleum Company (Enap) and Copper Corporation (Codelco) to play an important role in the production of green hydrogen.

“We want Enap to play a role not only as an infrastructure facilitator, but also as a producer of green hydrogen to accelerate the development of our local and export industry. We expect it to take a leading role in projects given its experience in energy infrastructure,” he said.

And with regard to Codelco, he said it can play an important role in promoting the energy transition from the mining industry, testing and studying low-emission technologies in its operations.

“Public, private, academic and civil society collaboration will be key to expanding this industry,” he said.

Maturana ruled out problems with water use, indicating that the projects presented would include desalination and/or water reuse.

“The cost of water in the production of green hydrogen represents less than one percent, so raising the cost of water to meet sustainable standards would not have a high impact on the final price of energy,” he explained.