Nothing is so firmly believed as what is least known.
Michel de Montaigne

STOCKHOLM, Jul 13 2022 (IPS) - During the beginning of the pandemic, people wanted to learn more about COVID-19. Enclosed in their homes they watched with fear and fascination how the pandemic swept over the world, while comparing numbers of affected people and the death-toll in different countries. Watching COVID’s rampage became a kind of horror show. However, already after a few months with death-tolls rising and isolation not being over anytime soon, psychological fatigue set in. Judging from media coverage it now appears as if the pandemic finally is over, which is far from being the case. 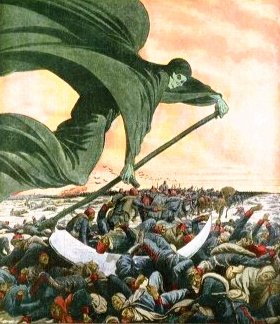 A similar phenomenon seems to arise in relation to the war in Ukraine. Media coverage is decreasing, even if Russian troops are advancing while towns and villages continue to crumble under their heavy bombardment. The Ukrainian war came as a shock. Without provocation an independent nation was invaded by a military super-power. However, soon general interest was fading and the war in Ukraine is in the minds of many gradually being transformed into a “traditional” war. Affected by declining endurance and lack of commitment, as well as an audience-adapted media, people have a tendency to “normalise” protracted human suffering.

Relatively safe and comfortable, media audience is now returning to previous internet surfing and TV channel zapping, searching for entertainment and celebrity gossip. The U.S. author Norman Mailer often repeated his view of the “Western World” as a place where people out of convenience and inertia tend to gloss over all complexity, avoiding questions that take more than ten seconds to answer. To form an opinion, they require tangible and upsetting events, while more in-depth analyses tend to bore them.

Superficiality and lack of analysis are evident in emotionally charged and polarizing postings prevailing on social media networks, where propaganda and shallow information are delivered to millions of consumers, distracting them from important issues, while strengthening hatred and bigotry, eroding social trust, undermining serious journalism, fostering doubts about science and furthermore serving as covert surveillance of lives and opinions of individuals acceding the global web.

Young people tend to have significantly better computer skills than older newspaper- and book readers and are accordingly by elders accused of spending too much time within a digital world. Nevertheless, I assume most internet users, no matter their age, have a tendency to enter a limited, personal niche of specific information. Their approach to source criticism is to visit sites they are familiar with, judging such information to be more trustworthy than the one offered by other news outlets.

Social media might make sense of life, though the problem is that they generally deal with other people’s views and lives, seldom with our own. However, this cannot be exclusively blamed on social media. After all, young and old are alike when it comes to assessing an incessant avalanche of information. It is a common human trait that few of us have the time, courage, or interest, to dig deep into our own mind in search of whom we actually are, as well as the origin of our ideas and opinions. Something that might influence a reluctance to take decisions on our own, and if we do so – take responsibility and stand by them.

Nevertheless, there are a few brave women and men who are able to do just that. An example – in 1983, a Soviet duty officer, Stanislav Petrov, did on the early warning system detect intercontinental, nuclear missiles entering Soviet air space. He was supposed to report this to his superiors, who without doubt would have launched a nuclear counter-attack. However, Petrov used his personal reasoning and experience. The radar had only detected five missiles and there was no indication of the U.S. considering a nuclear onslaught. If it really was a nuclear attack, why use only five missiles and not stage an “all-out assault”? Petrov assumed a system failure was more likely than an actual nuclear attack. He decided not to alert anyone and thus saved the world.

With this example in mind, let me return to COVID-19 and the war in Ukraine. Social networks are excellent tools for acquiring knowledge, though at the same time they nurture tribalism and intolerance, spreading damaging beliefs by convincing people to support a common, but bad cause, while avoiding personal, well-thought-out positions. Shared beliefs are the glue of community. In a bewildering and often hostile environment we are in need of a fixed place/position. A sense of belonging makes us feel safe and protected. We are herd animals and some of us consider the defence of rigid and shared beliefs as a matter of life or death, convictions that have to be kept alive and guarded from change, far beyond fact and reason.

Take the anti-vax movement. Due to strong beliefs in vaccines’ harmfulness people are willing to put their own lives, as well as those of others, in danger and even losing jobs and friends. This in spite of a global, scientific consensus that vaccines are safe and beneficent.

Anti-vaxers might be influenced by a lack of scientific knowledge, mistrust of public authorities, insufficient confidence in health care providers, general complacency, and/or misguiding religious/ideological beliefs. Fundamentalist Christians may believe that vaccinations are instigated by the Beast and a overture to the Apocalypse. Adherents to the Waldorf Movement can apply the founder’s opinion that their children’s spirits benefit from being “tempered in the fires of a good inflammation”, while Salafists might consider vaccination campaigns as a means of Infidels to pacify the zeal of the Righteous.

Delusions are fuelled by more than a thousand web sites spreading anti-vaccine misinformation, as well as a host of books and articles clogging social media with misinformation, hindering serious information to reach people already deceived by fake news.

Vaccination campaigns have eradicated smallpox, which once killed as many as one in seven children in Europe alone. With the exception of Afghanistan, Nigeria, and Pakistan they made polio disappear from earth. Half a million children were in 2000 dying from measles, ten years later these deaths were down by eighty percent, akin to similar reductions in mortality from diphtheria, whooping cough, tetanus and bacterial meningitis.

There is a wealth of scientific proof that opposing vaccination campaigns has negative effects. An example – starting around 2008, Somali immigrants in Minneapolis were targeted by organized meetings warning for a “vaccine-autism link”, eight years later the Somali community was in the throes of a serious measles outbreak. The same happened in 2019, when the Orthodox Jewish community in New York was targeted by a campaign comparing vaccines to the Holocaust.

There is no link between vaccines and autism. In 1998, British scientist Andrew Wakefield published, in the prestigious medical journal The Lancet, research results suggesting that measles-, mumps-, and rubella vaccines caused behavioural regression and developmental disorders in children. Even if Wakefield’s findings could not be reproduced and proven right, vaccination rates began to drop. After finding that research results had been falsified, The Lancet retracted Wakefield’s article. However, by then the vaccine-autism connection had gone viral on the web. Eventually, Wakefield was barred from practising medicine in the UK and it was found that his research had been funded by lawyers engaged by parents in lawsuits against vaccine-producing companies.

Even if there is no link between vaccines and autism, there is definitely one between plagues and war. The deadly influenza pandemic in 1918 was propelled by troop movements and population shifts. Typhus follows almost every war. Armed conflicts cause malnutrition, poor pest control, sanitation problems, soil and water contamination, and destruction of medical facilities, while vaccination and other mass-treatment programmes falter, or cease.

The current, armed conflict in Yemen has caused the largest cholera outbreak in history, while the disease was absent from this country before the war. Wars in Syria and Iraq led to a resurgence of measles and polio, and the same is occurring in the war-torn Democratic Republic of Congo, the Central African Republic and South Sudan.

The Russian invasion of Ukraine has severely damaged the health care infrastructure, preventing citizens from receiving medical help. Specialist services are disrupted – HIV treatment and tuberculosis control are impacted. COVID-19 is spreading, as physical distancing are difficult to maintain in underground shelters, while vaccination efforts have been disrupted. They were already low before the invasion, with only 35 percent of Ukraine residents fully vaccinated against COVID-19. The war has also halted a Government roll-out of polio vaccination.

Considering the intimate connection between war and epidemics, a holding on to the harmfulness of vaccine campaigns, or a justification of wars of aggression, appear to be both absurd and harmful. We need to learn to discern the “full picture”, to compare and listen to different voices/various
opinions and thus avoid to be entrenched in fake and harmful convictions.

Instead of being lured into bigotry, we ought to finally understand that everything is connected, not the least misinformation, war, and disease. This means we have to make a joint effort to refrain from spreading and clinging to fake news and instead try to save our planet from the actual perils threatening it. There is only one Earth and no spare.