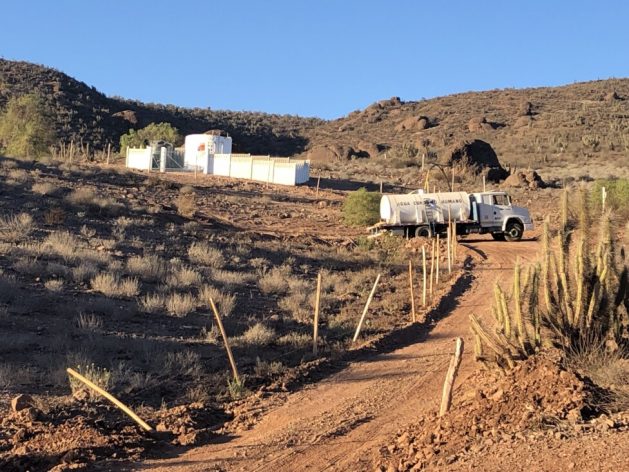 During the first three months of the year, the Quebrada Santander Rural Sanitation System supplied three to four truckloads of water daily to supply the empty tanks in the neighboring town of Pichasca - solidarity typical of these systems in Chile, which did not endanger the supply of its members and was supported by special subsidies to cover the water emergency. CREDIT: Orlando Milesi/IPS

RENGO, Chile, Aug 16 2022 (IPS) - Local leaders of the Rural Sanitation Services (RSS) warn that the digging of illegal wells by large agro-export companies in Chile is aggravating the effects of drought and threatening drinking water supplies and social peace.

Leaders of these programs also emphasize that the new constitution that may emerge from the Sept. 4 plebiscite would guarantee the human right to water, which would strengthen its management and that of river basins, in addition to facilitating a response to the water crisis to prevent it from triggering protests and social conflict.

Water rights were commercialized during the 1973-1990 dictatorship of General Augusto Pinochet, and between 1994 and 2006 the governments in power during the democratic transition sold the large water utilities to foreign companies, which have controlled the water supply in Chile’s cities since then.

The water supply in rural areas, considered unprofitable by these companies, was left in the hands of the country’s 2,306 RSS, which were institutionalized and transformed into Rural Sanitation Services in 2020 by a legal reform. They operate throughout this long narrow South American country of 19.5 million people and have 7,000 leaders and 6,000 workers.

The RSS, made up of cooperatives, local residents’ committees and other social organizations of different sizes, have the role of guaranteeing the drinking water supply in rural areas, with the State as supervisor and infrastructure provider. It is possible that in the future they will also take on responsibility for sanitation.

These systems benefit 2.1 million people, to whom they provide water at a lower price than the distribution and sanitation companies.

During the COVID-19 pandemic, 90 percent of the RSS never stopped serving their users, and despite the quarantine most of them paid their monthly fees, to maintain the system.

The Directorate of Hydraulic Works (DOH) of the Public Works Ministry told IPS that during the 2021-2022 period it will invest some 57 million dollars in seeking new sources of supply, and in the conservation and integral improvement of the systems. For 2023 the projected investment is 14 million dollars. 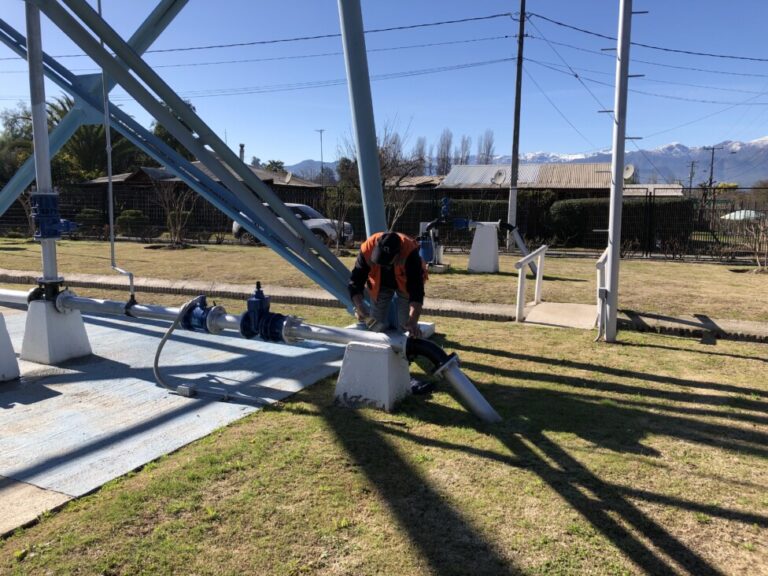 Maintenance is an ongoing job at the La Alianza RSS in the town of Choapino, some 105 km south of Santiago, Chile. CREDIT: Orlando Milesi/IPS

The Chilean economy is based on mining, especially copper, and large agricultural exports, two industries that require large amounts of water in a country with limited water resources.

The result is growing water stress, which accentuates the tension between powerful industries and human consumption and small-scale agriculture, aggravated by the private management of an essential resource such as water.

Against this backdrop, the RSS have alleviated access to water, but as recurrent droughts and other climatic impacts accentuate the water deficit, their role is becoming more difficult, without a substantial change in the right to water.

Francisco Santander, treasurer of the RSS in Quebrada Santander, in the Andes foothills 450 km north of Santiago, told IPS that “the first well we drilled by hand with 20 members in 1999. Now there are 45 of us.”

“The largest 50-meter well was dug five years ago. It is one of the deepest in the municipality of Río Hurtado. We bought a piece of land and applied for a drilling project. The money was provided by the DOH,” he said in an interview from his hometown.

The investment included pumps, a solar panel for energy, gabions (a basket or container filled with earth, stones, or other material), a well and a 50,000 liter tank.

“Last summer, faced with the drought crisis, we sold water to Pichasca (a neighboring town). They asked us for help. We gave them up to four truckloads a day for their tanks and they paid with an emergency subsidy. Our well is holding up well under a moderate level of consumption,” Santander proudly explained.

The solar panel was the first in Rio Hurtado and reduced energy costs by one-sixth. It contributes to the low price charged for water: 1.3 dollars per cubic meter and 2.2 dollars as a basic service fee.

Gloria Alvarado with the RSS in El Patagual, which serves 800 members in Pichidegua, a municipality of 18,000 inhabitants 165 km south of Santiago, was president of the National Federation of Rural Drinking Water and was a member of the Constitutional Convention that drafted the new constitution that voters will approve or reject in next month’s plebiscite.

Speaking to IPS from El Patagual, as a national expert, she warned about the critical water situation caused by climate change and drought, which is aggravated by overuse, poor distribution of rights and deficient watershed management. 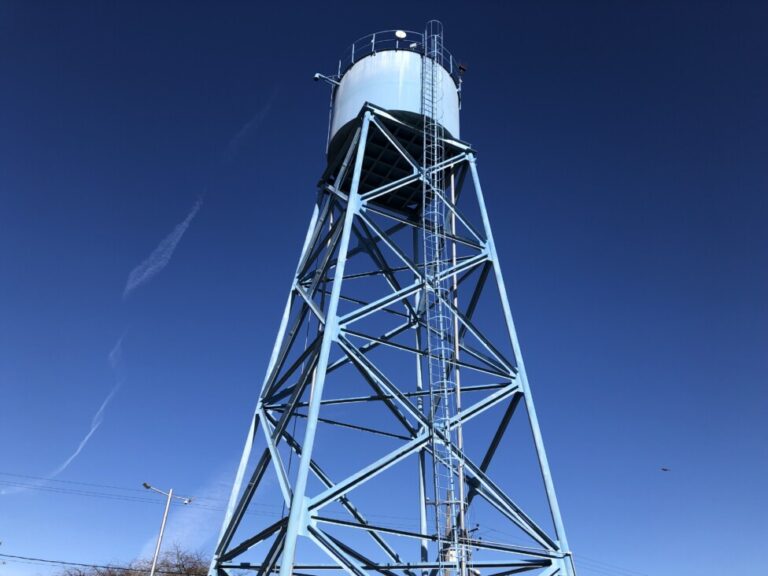 A view of the 75-cubic-meter water storage tank installed at La Alianza, in Choapino, where the office also operates to attend to the needs of members and receive payment of their bills. The users of these rural sanitation systems, which are common in Chile, are not usually late with their payments, because thanks to these systems they have water in a country where water management has mostly been privatized. CREDIT: Orlando Milesi/IPS

“Petorca (a municipality 205 km north of Santiago) has a very green side with avocado plantations, but has another where the people have no water to drink and are supplied by water trucks. It is difficult for a 50-meter RSS well to compete with a 200-meter well,” she said, complaining about the agro-export companies.

She also alluded to the heavy use of water by forestry companies in southern Chile and mining companies “which until recently had no obligation to report their water use,” as they now do thanks to Article 56 of the new Water Code.

In Chile’s central valley, the plantations of fruit exporters have expanded exponentially, without any limits on their expansion, which has left many areas at water risk, Alvarado said.

“Seventy-nine percent of water rights are in the hands of one percent of Chileans. It is inequitable and many families suffer the consequences,” she said, complaining that an essential resource has been transformed in Chile into a tradable commodity.

José Rivera is the administrator of the 500-family RSS in La Alianza in Choapino, in the municipality of Rengo, 105 km south of Santiago.

The town is part of the central region of O’Higgins, the largest exporter of fruit, wine, pork and chicken, “which basically means it exports water,” he said during a visit by IPS to the La Alianza facilities. As a result, he said, “we used to make 30-meter wells here, today we dig 100-meter wells, and in the nearby municipality of Machalí we dig 200 meters.”

According to Rivera, who is secretary of the National Federation of RSS Chile, another problem in O’Higgins is that for the last 10 years wells have been dug stealthily and without oversight.

“Farmers have so many plantations that they began to extract groundwater and make clandestine wells. There are thousands of wells” that nothing is known about and which are subject to no controls, he said.

“Before, we were basically the only ones who used groundwater. Today the agribusiness companies are replacing river water with groundwater and we have no inspectors in the General Water Directorate. They have no resources and no authorization to enter a farm,” Rivera said.

One solution, in his opinion, would be the use of drones to investigate unregistered wells.

“The biggest problem, and I’m speaking for the association, is that there is a war of wells. If I dig a 40-meter well, the farm will dig a 100-meter well and so on and so forth. The State will not have resources and neither will we. And there will be another outbreak of social unrest,” he predicted.

Rivera calls the situation “a silent water earthquake,” after touring the region and seeing the thousands of hectares of land planted.

“The coastal dry land is full of olive trees, where there were none before. Pichidegua is full of avocado trees. It is a crime because we have no water. The powerful, who own 500 or 1000 hectares, take water from here and transport it to the hills, where there are more and more plantations,” he said.

Meanwhile, “there are small farmers with five or six hectares who are without water,” he said, describing the situation as “serious, a powderkeg.” 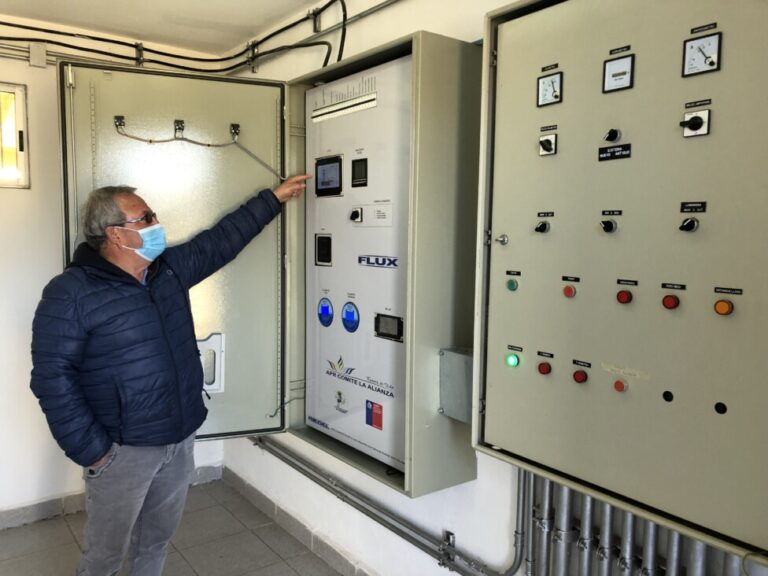 José Rivera, administrator of the La Alianza RSS, checks the instruments of the new flow measurement system that indicates, second by second, how much water is in the tank and how much is being consumed in the water starters installed in the houses of each of the members of this rural sanitation system, a social organization unique to Chile, which alleviates the water deficit in the country. CREDIT: Orlando Milesi/IPS

Water as a human right

Alvarado said the solution to water management lies in the new constitution.

The text approved by the Constitutional Convention “will redistribute the right to use water,” she said. “It will put an end to the ownership of rights, which will be converted into use authorizations.”

She said that one of the origins of the water crisis is that there is an over-granting of rights that exceed the actual water sources and that there are very few water inspectors.

“An autonomous National Water Agency will be created and there will be integrated basin management in which users will be on an equal footing,” she said.

Rivera said the large landowners deceive small farmers by telling them that if the new constitution is approved they will be left without water, while “the constitutional proposal actually states that water is a public good.”

A step in the right direction

He highlighted, as a positive step, the promulgation in April of this year, under the government of leftwing President Gabriel Boric, of the reformed Water Code “for which we fought for 15 years.”

“The new law is very good because it protects rural areas and indicates that no one can ask for a concession in a rural area. They cannot privatize. Urban sanitation companies cannot enlarge their area of operation,” he stressed.

“We were recognized as RSS and today we can dig wells and draw water if it is for survival and basic consumption,” he added.

“Nobody wanted to change the Water Code, nobody wants to change the constitution…who is ‘nobody’? the economic powers-that-be. They do not want to change. We have to change,” he argued.