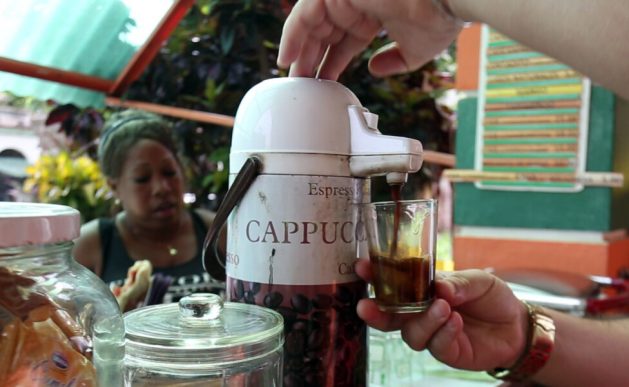 A waiter serves coffee in a glass to a customer outside a coffee shop in Havana's Vedado neighborhood. Drinking coffee on the street and in homes is a custom in Cuba that has become increasingly difficult to maintain, due to scarcity and cost. CREDIT: Jorge Luis Baños/IPS

HAVANA, Sep 9 2022 (IPS) - While the Cuban government’s plans to increase production begin to bear fruit, Mireya Barrios confesses that she seeks every possible way to enjoy a cup of coffee every day, in the face of high prices and scarcity.

“If I don’t drink it I don’t feel good, I have a headache all day. For me drinking coffee is almost as important as eating,” said Barrios, who receives from family members quantities of coffee beans “brought from the east, where the best coffee in the country is produced,” which she mixes with chickpeas before roasting, to make it stretch farther.

After drinking her own cup, Barrios sells coffee as a street vendor in the early morning in the old town district of Centro Habana, one of the 15 municipalities that make up Havana.

“That sip of hot coffee is sometimes the entire breakfast of people who go to work and don’t have it at home because they leave in a hurry, or because they don’t have any coffee, which in addition to being scarce has become very expensive,” Barrios said in an interview with IPS.

Coffee is part of the basic food basket on the island. The government sells each month, per person and on a subsidized basis, a 115-gram package mixed with 50 percent chickpeas.

In recent months there have been delays in distribution due to the late arrival of raw materials, including packaging paper, given the financial problems faced by this Caribbean island country in the midst of the deepening structural crisis of its economy, which dates back three decades.

When consulted by IPS, residents in some of Cuba’s 168 municipalities admit that the coffee quota “is barely enough for seven to 10 days, if you’re thrifty.”

People often resort to the black market to acquire additional quantities. There, the same 115-gram package, often taken from stores or government establishments, is sold for the equivalent of half a dollar.

Better quality Cuban and foreign coffee brands are sold almost exclusively in stores in convertible currencies, unaffordable for many families who are paid wages in the devalued Cuban peso.

For example, a kilo of the national brand Cubita costs about 15 dollars in a country with an average monthly salary equivalent to 32 dollars, according to the official rate of 120 pesos to the dollar. 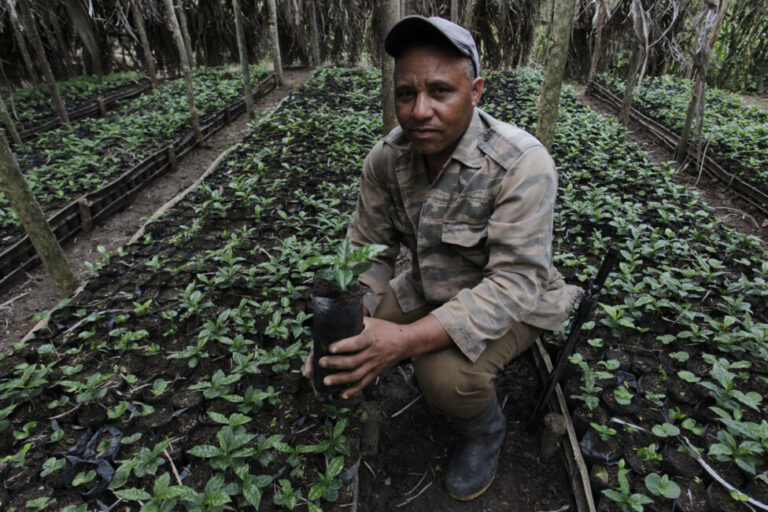 Roberto Martínez shows the nursery where he grows new coffee plants in the town of Palenque, Yateras municipality, in the eastern Cuban province of Guantánamo. A cooperation project with Vietnam created seed banks to renew and improve cuttings and thus boost the quality and yields of local coffee. CREDIT: Jorge Luis Baños/IPS

Boosting coffee production on the plains

Coffee arrived in Cuba in 1748 and production received a major boost after the Haitian revolution (1791-1804), with the immigration of French-Haitian farmers who settled in mountainous areas of the eastern part of the island where they set up coffee plantations, some of whose ruins were declared World Heritage Sites by UNESCO in the year 2000.

During part of the 19th century, this country was the main exporter of coffee to Europe, exporting 29,500 tons in 1833, for example.

Statistics show that the historical record was reached in the 1961-1962 harvest: 60,300 tons. But after that production declined and currently volumes do not exceed 10,000 tons per year.

With a demand of 24,000 tons per year, this once important exporter actually has to import coffee from other countries, but in quantities that do not meet its needs.

According to Elexis Legrá, director of coffee and cocoa of the Agroforestry Group (GAF), attached to the Ministry of Agriculture, Cuba exports the Arabica variety, the highest quality, produced by coffee growers in mountainous areas.

The prospect is to start exporting small quantities of the Robusta variety, in greatest demand on the international market.

This year, the goal is to export some 2,700 tons, a figure similar to that of 2020, according to industry executives.

Experts say the main factors behind the drop in production are pests, tropical cyclones that frequently hit the island, the effects of climate change, the depopulation of rural and mountainous areas and obsolescent technology.

About 90 percent of national coffee production comes from the mountains in the four easternmost provinces: Holguín, Granma, Santiago de Cuba and Guantánamo, where the highest quality varieties are grown, due to tradition and favorable microclimates.

However, since 2014 the Cuban government began identifying soils with adequate conditions for planting coffee in lowland regions, and training courses and technical advice have been provided to new coffee growers. 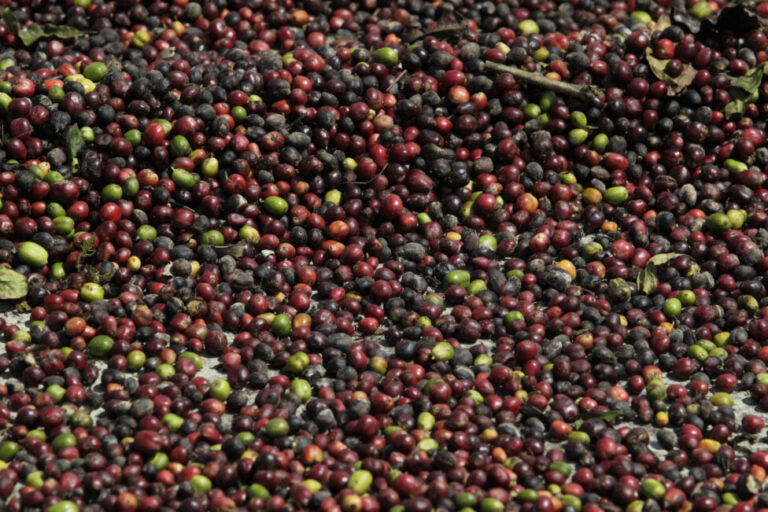 Sun-dried coffee beans in Palenque, in the municipality of Yateras in the province of Guantanamo. The easternmost of Cuba’s provinces is one of the largest local producers of coffee, where the highest quality varieties are grown, due to tradition and the favorable mountainous microclimates. CREDIT: Jorge Luis Baños/IPS

“They used to say you couldn’t grow coffee here, and today we have some 2,000 bushes on just half a hectare,” Juan Miguel Fleitas told IPS. In addition to growing root vegetables, fresh produce and fruit and raising livestock, he also grows coffee on his family farm, Victoria 1, in the capital’s Guanabacoa municipality.

The UBPCs manage both private properties and state lands granted in usufruct in this socialist nation with a largely centralized economy.

“In the cooperative we have about eight hectares of coffee, dispersed. We are working on the introduction of Vietnamese coffee. It has a good yield, with a larger bean,” the farm’s head of agricultural production, Jorge Luis Gutiérrez, told IPS.

The beans came from seed banks from the east of the island, as part of the Cuba-Vietnam collaboration project, developed from 2015 to 2020.

In the 1970s, Cuban experts taught Vietnamese farmers and extension workers to plant this variety, in a nation then devastated by the war with the United States (1955-1975).

Vietnam is today the second largest exporter of the bean and shares its know-how with Cuba to achieve Robusta coffee cuttings that guarantee renewed plants with superior characteristics, in order to increase quality and yields.

Cuba’s “program to grow coffee in the lowlands” has set a goal of planting 7,163 hectares of coffee in production areas in several of the country’s 15 provinces.

So far, 1,200 hectares have been planted, another 700 hectares are in preparation, and the aim is to harvest more than 4,000 tons by 2030, according to official estimates. 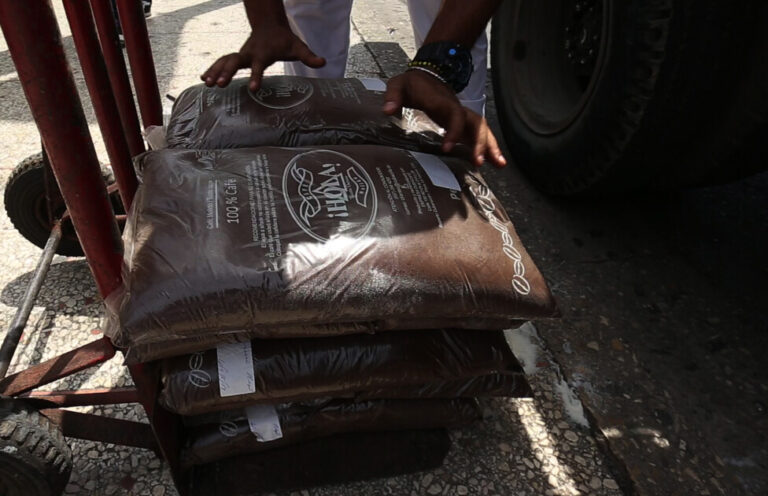 Bags of coffee are stacked on a handcart, to be sold at a state-run establishment in Havana’s Vedado neighborhood. The government provides 115 grams of coffee per month to Cuban families at subsidized prices, but in recent months it has been delivered with delays due to difficulties in obtaining supplies. CREDIT: Jorge Luis Baños/IPS

Esperanza González is committed to growing coffee “without chemicals or herbicides, only using agroecological management techniques, earthworm humus, lots of organic matter and free-roaming chickens that help fertilize the soil with their excrement.”

González, who returned to Cuba after living for years in the Canadian province of Manitoba, was granted in 2017 in usufruct the eight-hectare Farm 878 that she renamed Doña Esperanza, located in the town of Santa Amelia, in the municipality of Cotorro, near the capital.

Since 2008, the Cuban government has granted unproductive and/or degraded land in usufruct to recuperate it and bolster food production.

This policy forms part of plans to strengthen food security in a country that is up to 70 percent dependent on food imports, whose rising prices lead to a domestic market with unsatisfied needs and shortages.

González, who through her own efforts imported “the equipment and the technology to be able to completely process our coffee,” told IPS that she hopes that with this year’s harvest they will “have a local quality product packaged under our own brand.”

However, she also highlighted “the exchange with coffee growers in the municipality of Segundo Frente (in the province of Santiago de Cuba), from whom we have received baskets to harvest coffee and give the final preparations to our crop.”

In 2021 “we harvested half a ton of good quality beans. We hope that little by little Doña Esperanza will become a lowlands coffee farm with higher volumes of export-quality and national-consumption production, which is so much needed,” she said.

Several initiatives with international support seek to strengthen the value chains associated with coffee production, restore the soils and ecosystems where coffee is grown, and identify markets for selling coffee grown with sustainable practices.

Prodecafé, an agroforestry cooperative development initiative that will run until 2027, was launched in February. With a budget of over 63 million dollars, it is expected to benefit 300 cooperatives in 27 municipalities in the four eastern provinces where coffee production is concentrated.

This joint project of the International Fund for Agricultural Development (IFAD) and the Ministry of Agriculture is aimed at strengthening the cocoa and coffee value chains and includes a gender approach by encouraging the inclusion of women in agroforestry activities.