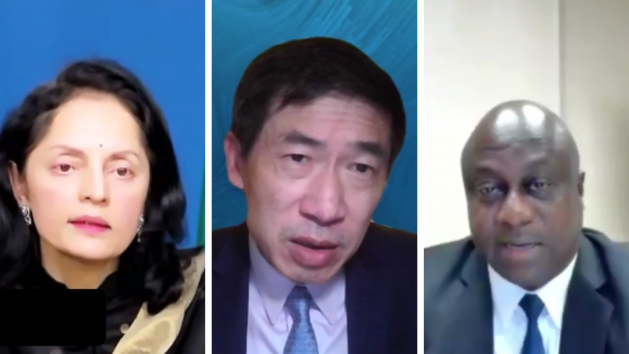 Organized by the UN Department of Political and Peacebuilding Affairs (UNDPPA) and the UN Development Programme (UNDP), the joint virtual side event explored how to strengthen cooperation among developing countries and discussed various SSTC projects. The panel was part of the annual Global South-South Development (GSSD) Expo occurring from Sept. 12 to 14 in Bangkok, Thailand.

SSTC refers to a collaboration whereby traditional donor countries and multilateral organizations help create initiatives between two or more Global South nations. Support is typically given in the form of funding, training, and/or management.

In her opening remarks, Elizabeth Spehar, Assistant Secretary-General for Peacebuilding Support, emphasized the importance of these collaborations. She pointed to the role that organizations like the Group of Seven Plus—a collective of 20 conflict-affected countries that promotes stability through peer learning and advocacy—can play in helping vulnerable countries tackle their most pressing problems.

Only 18 percent of conflict-affected countries are currently on track to reach the UN Sustainable Development Goals, she noted.

“The resource and capacity limitations that many fragile and conflict-affected countries face can be enormous. Solidarity and peer-to-peer support through cooperation spearheaded by entities like the group of seven plus today, are more important than ever.”

The need to bolster South-South initiatives became especially clear during the pandemic, Ruchira Kamboj, Permanent Representative of India to the United Nations, asserted during the event’s panel.

“As we witnessed, the COVID pandemic has tested the resilience of multilateral institutions, and the global south has been largely fending for itself. In realizing that, […] South-South cooperation has become even more crucial.”

She also emphasized the power of knowledge sharing among developing nations.

“Sharing valuable capacities, experience and knowledge amongst developing countries can be a catalyst for development as opportunities have improved for sharing the fruits of knowledge, technology, and growth.”

The panel also discussed how cooperation could help countries during conflict resolution.

Alhaji Fanday Turay, Permanent Representative of Sierra Leone to the United Nations, commented on how SSTCs were crucial to resolving his country’s civil war.

“Sierra Leone was plagued with 11 years of civil war that led to not only the loss of lives and properties but a breakdown in institutions and a retardation of development in all forms. However, through regional and cross-regional interventions and cooperation, Sierra Leone was reinstated as a democratic and peaceful state.”

Turay cited key examples that showcased how Sierra Leone had benefitted from SSTC collaboration around ensuring peace. This included the deployment of a Western African peacekeeping mission to implement the Lomé peace agreement and the establishment of the Truth and Reconciliation Committee in Sierra Leone—a step set out in the peace accord, which was overseen by the UN.

“It is very clear that the civil war in Sierra Leone ended as a result of collaborative efforts from member states of the global south and other development partners.”

SSTCs have also been used to boost the capacity of women’s participation in peace negotiations.

This sharing created important networks in areas where before, there were very few women equipped to participate in negotiations. Hernandez noted that establishing these networks was especially important given the peacekeeping field is dominated by older men, with specific views of security and peace.

By making the training comprehensive, the course also ensured trainees were able to tackle various types of conflict, significantly bolstering their ability to meaningfully participate.

“The idea is for them to not only be part of one attack, one negotiation, but also [to be] the face of security arrangements that can go to a very local situation in which all of these techniques, tools, and technical knowledge will be useful for them to solve and to participate in the more technical part of these processes. […] We are trying to build the capacity of each course around 25 women, but they will [be able to] replicate the knowledge to two more women in the locality.

In closing the event, Haoliang Xu, Assistant Secretary-General and UNDP Director of Bureau for Policy and Programme Support underscored the need for developing countries to lean on each other’s expertise and collaborate in tackling tough issues.

“There is no international system in which the national governments have to transfer resources to support less developed areas […] To ensure that the level of development meets certain standards internationally, the best tool we have is solidarity and development cooperation.”