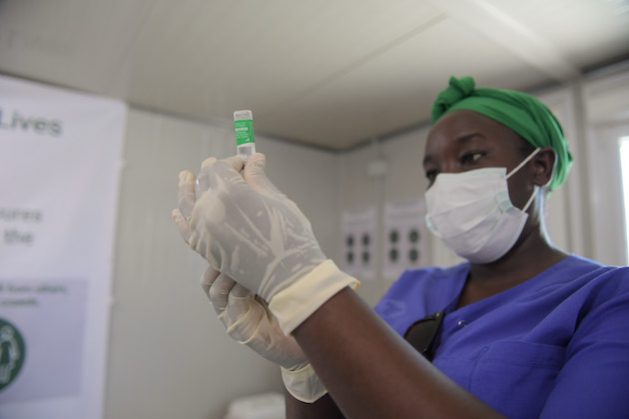 A medical officer preparing to give a COVID-19 vaccine in Somalia in May 2021. Credit: Mokhtar Mohamed/AMISOM

UNITED NATIONS, Sep 8 2022 (IPS) - With the outbreak of Monkeypox in non-endemic countries leading to a scramble for vaccines, global health advocates are again calling for equity to be prioritized in the international response.

Equity was a top concern during the initial stages of the COVID-19 pandemic emergency health response. The World Health Organization (WHO) helped spearhead several initiatives in an attempt to reduce disparities between nations, notably COVAX, the vaccines pillar of the Access to COVID-19 Tools (ACT) Accelerator.

“We still as Africa don’t have any supplies of monkeypox vaccines, even though as a continent, we’ve been dealing with this disease for a number of years. So on one level, now that it’s become a Global North problem, the vaccines have been found for them, but not for us.”

Monkeypox can be combated with smallpox vaccines, which are 85 percent effective against the virus. Since the disease was eradicated in 1980, the WHO has had 31 million doses set aside for a rapid response in case smallpox should re-emerge. The organization is currently assessing the potency of this stockpile and whether it can be deployed against Monkeypox.

However, these doses have never been distributed in Africa, where Monkeypox has circulated since the 1970s. The continent is also facing a much higher death rate. When the WHO declared a global health emergency, the only deaths recorded were from West and Central Africa, where 4.7 percent of people who contracted the disease had died.

In the case of COVID-19, many saw the international rules that allow pharmaceutical companies to protect their intellectual property (IP) as simply reinforcing existing disparities between countries.

Several wealthy countries signed contracts with pharmaceutical companies, helping finance private sector research and development, in exchange for prioritized access to vaccine supply. When companies eventually developed successful vaccines, the technology they used was restricted from being shared with the global community. Nations that lacked both the technology and the resources to purchase on the open market resources had to rely on vaccine donations from rich countries that came several months later.

Over 100 organizations and networks joined a coalition called The People’s Vaccine to call for the suspension of intellectual property rules and mandatory pooling of COVID-19-related data and technologies. Those supporting the alliance’s call include the current leaders of the Joint United Nations Programme on HIV/AIDS (UNAIDS), the UN Special Rapporteur on extreme poverty and human rights, and former Secretary-General Ban Ki-Moon.

For Hassan, intellectual property regulations were especially problematic given the participation of Africans in trial phases for Moderna and Pfizer’s COVID-19 vaccines.

“We did all those trials; we’ve contributed to the knowledge generation and to the scientific knowledge that allowed [pharmaceutical companies] to get emergency use authorization. But we were not guaranteed supplies or access or preferential access. So the deeper inequity in this entire setup was also that the Global South was asked to participate in the research and the trials, but there was no regulated way of ensuring […] genuine benefit sharing agreements.”

For countries worldwide, the COVID-19 pandemic has highlighted the importance of increased self-sufficiency in coping with global health emergencies.

“I think that was the lesson of COVID. For the global South, it was like, oh, okay, we need to actually figure this out by ourselves,” Hassan said.

Several initiatives have been created to fulfill this goal, including a new mRNA vaccine technology hub in South Africa.

The hub was launched by the WHO and COVAX in Afrigen, Cape Town, on June 21, 2022. It aims to bolster low and middle-income countries’ capacity to produce COVID mRNA vaccines by training scientists in developing mRNA vaccines and pooling all knowledge acquired by partners. The site in Afrigen will be run by a consortium that includes Biovac, Afrigen Biologics, and Vaccines, a network of universities, and the Africa Centers for Disease Control and Prevention (CDC).

When the hub launched, South African President Cyril Ramaphosa commended the initiative and its implications for Africa’s role globally.

“The COVID-19 pandemic has revealed the full extent of the vaccine gap between developed and developing economies and how that gap can severely undermine global health security. This landmark initiative is a major advance in the international effort to build vaccine development and manufacturing capacity that will put Africa on a path to self-determination.”

African scientists are heading the technology transfer hub. It has already produced the first batches of an mRNA vaccine with technology that will be transferred to 15 countries.

Reflecting on Africa’s response to COVID-19, Public Health Professor Flavia Senkubuge told IPS that she’s proud of how well the continent dealt with the caseload, especially as many predicted COVID-19 would “literally obliterate” the region.

The WHO has cited Africa as “one of the least affected regions of the world” throughout the pandemic. The number of total deaths from the continent, 256 555, makes up 3 percent of the world’s total, 6.49 million. In contrast, deaths from the Americas and Europe accounted for 46 and 29 percent, respectively.

Senkubuge told IPS that predictions that Africa would be completely overwhelmed overlooked the expertise Africa has garnered in combating public health crises, notably HIV and AIDS.

“If you look at South Africa, for people like me who trained and practiced as physicians during the HIV and AIDS period, we are used to those large numbers of very sick patients. Additionally, in South Africa, you must remember that we are a country that has a quadruple burden of disease, therefore which means we have a high volume of patients coming into our health establishments. We are therefore used to working differently, having an optimum triage system, and working in under-resourced and high-pressure environments.”

Yet, the pandemic has also highlighted their contributions to global health, Senkubuge said. She pointed to South Africa’s discovery and swift response to the emergence of the Omicron variant. She believes this has led to a shift in how African scientists are considering their work on the global stage.

“As African [scientists], […] I think we have kind of shifted the paradigm to say we are here, we are not going anywhere. We’re not going to try and convince anyone regarding the excellence of our work, we’ll just do our work, continue to share it with our communities, publish in the top journals and be part of the global discourse on our own terms. You’re welcome to retake, amend, recheck, but actually, we stand resolute in our unapologetic knowledge that the work we do here in Africa is excellent and contributes significantly to global health.”