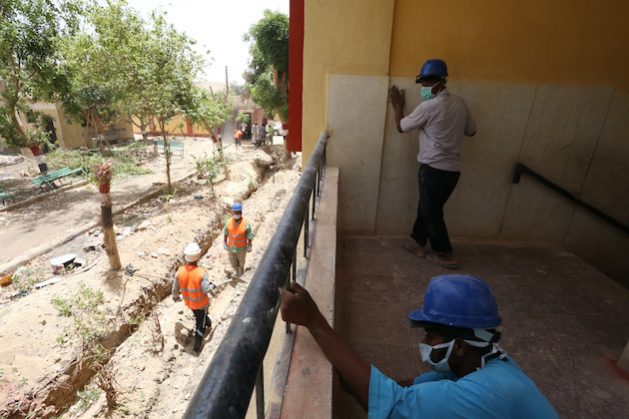 United Nations, Aug 24 2022 (IPS) - When COVID-19 prompted economic shutdowns across the globe, many analysts predicted that youth would be especially at risk. This is because young people tend to have fewer economic assets and limited experience in the labor market.

A recent International Labour Organisation (ILO) report published on August 11, 2022, confirmed this vulnerability. The Global Employment Trends for Youth 2022 found that the pandemic set employment rates for youth back more than for any other age group.

Certain regions struggle with youth employment more than others. High-income countries would see their youth employment rates back to pre-pandemic levels by the end of the year, the report revealed. In Africa, however, the decline would only serve to worsen a state of affairs that was already growing perilous.

Africa hosts the world’s youngest population. Seventy percent of Sub-Saharan Africans are under 30. But, only 3 million jobs are available for the 10-12 million young people on the market each year.

One in five African youths were not in employment, education, or training in 2020, according to the ILO.

Young people across Africa face both unemployment and underemployment. Both situations have potentially serious long-term consequences for young people.

In South Africa, the unemployment problem is acute. The current rate for youth is 63.9 percent.

Dr Lauren Graham, Director of the Centre for Social Development in Africa at the University of Johannesburg, explains one of the underlying challenges is the nation’s high bar labor market.

“Much of the challenge sits on the demand side – high levels of unemployment are related to low job growth over many years – insufficient to absorb the large numbers of work-seekers. Young work-seekers often enter the labor market at the back of the labor market queue with limited experience and qualifications.”

Elsewhere in Sub-Saharan Africa, young people are more likely to be underemployed. Unable to find formal jobs, many end up in the informal economy, engaging in precarious work to earn a wage.

Limited economic opportunity for youth can pose significant problems for societies. It can often lead to an increase in alcohol and drug abuse and crime. Academics have pointed out that swathes of unemployed youth have also led to political turmoil, the most notable example being the Arab Spring.

In its report, the ILO issued several recommendations for governments around the world to boost youth employment. Prime among them were investing in the blue (activity involving the marine environment) and green (activity aimed at reducing environmental risk) economies.

Such investments could generate up to 8.4 million jobs globally for young people, per the ILO. This has been a particularly loud cry for Africa, given the breadth of its natural assets.

“The immediate task that lies ahead for all of us is in formulating and executing actionable policies at the country and regional levels. The most effective policies will be those that leverage cross-border, digital and inclusive entrepreneurship to transform the future of young people.”

The organization partners with ministries of education in 13 different countries to bring programs around work readiness and skills development to students. So far, they have reached more than 300,000.

“JA Africa sees entrepreneurship education as the solution to this gap, not only to create entrepreneurs but to skill young people for the few jobs that are actually available because they need upskilling,” he said.

This education also has ripple effects, he added. Empowering one student to start a business will lead other students to be employed by the business. More students will also be inspired to create their own enterprises.

Over 72 percent of students who participated in JA Africa’s program went on to create businesses, according to a company survey. Most of these initiatives also gave back to their community.

“These usually create businesses that are community-oriented, looking at addressing some of the serious issues in their communities, like plastics, plastic pollution. They look at youth empowerment themselves. They try to bring solutions to some of the things that they see around them. So really, we are creating solution providers, who are also going to go on and help others.”

The organization has goals to expand to 20 countries, reaching a million young people across the continent.

Closing its report, the ILO noted that the COVID-19 recovery presents opportunities for governments to pursue policies that boost youth employment.

On South Africa’s unemployment problem, Graham stressed that no matter what policies get selected to tackle the crisis, policymakers should consider poverty-related barriers that may hinder young people’s ability to access employment.

“Young people in [South Africa] also struggle to transition into the labor market at the same time as they face multiple forms of deprivation including food and income insecurity, care responsibilities, and in some cases strained mental health.”

The suggested policies were all necessary and welcome, Graham told IPS, but they will need to be evaluated to see how young people fare in their wake to measure their true impact.