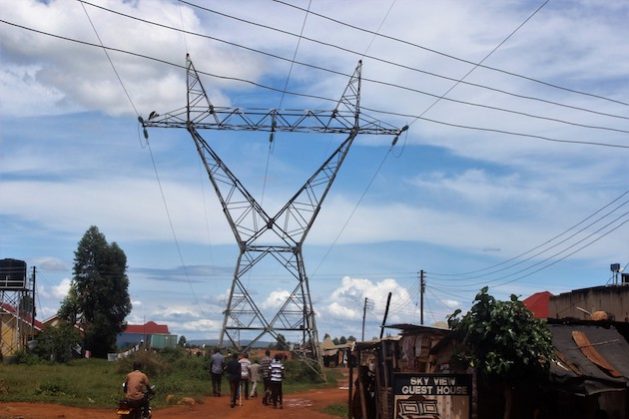 Some African countries support nuclear energy in the Net Zero debate. Nuclear has emerged as an option, but only one African country, South Africa, has a nuclear generation capacity. Credit: Wambi Michael/IPS

Kampala, Nov 9 2022 (IPS) - The search for energy diversification has taken a more frantic pace amidst the global energy transition debate.

Unlike in the past when some countries were skeptical or outrightly ruled nuclear out in the Net Zero debate, it will be one of the options at COP27 in Egypt.

“There has been good progress since 2019 when we made our first report in 2019. Now 10% of nuclear capacity in the world has been granted lifetime extensions. The main message is nuclear is set to make a comeback,” said Fatih Birol, the Executive Director of IEA.

According to IEA, at the end of 2021, 439 nuclear power reactors were in operation in 32 countries around the world, with a combined capacity of 413 GW. Around 270 GW of that capacity was in advanced economies. One of the key observations is that despite the presence of enormous uranium resources, South Africa is the only African nation with a 1.86GW operational nuclear power plant.

Apart from South Africa, Egypt, which is hosting this year’s COP27 or the UN Climate Change Conference, commenced the construction of the four 1200 MWe reactors as part of its ambition to provide steady electricity to its people over the next decades.

Studies have found that fossil fuels and hydropower dominate Africa’s energy generation mix. Renewable sources like solar and wind contribute just 1.6% of the energy in Africa.

Energy demand in Africa is projected to grow by 80% by 2040. That is, at 3.5% per year, faster than the global average of 1.3%. As such, several African countries have expressed interest in nuclear power.

According to studies by a Ghanaian Research Scientist, Dr Simon Adu, a number of African countries have substantial amounts of uranium deposits, but it has not been deployed in the energy mix.

“For example, Namibia provides about 7% of the world’s uranium reserves. Sadly, African access to electricity is the lowest in the world according to the World Bank, and infrastructure in many parts of the continent is scarce,” notes Adu.

As of the end of the 26th UN Climate Change Conference of the Parties (COP26) in Glasgow, 17 countries in Africa had expressed interest in nuclear energy. These include Tanzania, Ghana, Kenya, Egypt, Nigeria, Niger, Morocco, Sudan, Uganda, and Rwanda.

This month, Uganda announced that it was pushing ahead with its plan to put up a 2000 MW nuclear reactor plant to be commissioned by 2031. A team had just cleared the East African country of experts from the International Atomic Energy Agency (IAEA) to proceed to the next stage of using nuclear for peaceful application.

The IAEA conducts an Integrated Nuclear Infrastructure Review (INIR) of member states to ensure the safe establishment of nuclear power plants. The last mission to Uganda was in May this year.

“As Uganda prepares to introduce nuclear energy to meet growing electricity demand, it is important the government continues to support further development of the infrastructure needed for a safe, secure, and peaceful nuclear power program,” said Mehmet Ceyhan, who led the IAEA mission to Uganda

With the IAEA clearance, Uganda’s Energy and Mineral ministry’s permanent secretary, Irene Batebe, told IPS that nuclear power would be part of the country’s effort to meet its Net Zero ambitions.

“As we are going into the energy transition, nuclear power is a very clean option for as long as you manage the waste very well,” she said

Batebe observed that nuclear remains a very sensitive investment area, especially in Africa, given the radioactive nature of uranium and the consequent fuels that arise from it.

“Usually, the question is does the country have a robust legal and regulatory framework. Given the risk of proliferation of nuclear. It is important to emphasize that we are members of the IAEA. So are regulated at global level,” she said

“From our feasibility, we have decided that we can bring on board 2000MW of nuclear power by 2031. You might think that this is ambitious, but working with IAEA, we are still on course for that target,” Batebe told IPS

In most of Africa, when people first hear about nuclear energy, they think of the accidents that have happened, like Chornobyl and Fukushima, and then nuclear weapons.

Others have observed that Africa cannot afford the cost of putting up nuclear reactors. Uganda, for example, needs $9bn for the 2000MW plant to be located on the shores of Lake Victoria.

A Ugandan Electrochemical Energy Conversion expert, Dr Justus Masa, told IPS that rather than spend $9bn on nuclear, Uganda should invest in solar and geothermal.

“Germany has installed solar capacity of 50,000 Mw. It has only about six months of sunshine a year. During the summer, they can go 100 percent renewable. Looking at the price of solar energy. I see that solar has enormous potential for us in Africa. I could see that solar is cheaper than nuclear,” observed Masa, also a Senior Staff Scientist with the Germany-based Max Plank Institute for Chemical Energy.

The Executive Director-Minerals Africa Development Institution (MADI), Frank Dixon Mugyenyi, however, told IPS that while solar and geothermal are viable in the case of Uganda, nuclear should be part of the energy mix in Uganda and Africa.

“When you look at Ukraine, as of 2021, 55.5 percent of its electricity was produced by nuclear. They have four nuclear plants. I don’t think in Africa we should shy away because of the sensitivities around it,” said Mugyenyi, formerly the Coordinator of the Africa Minerals Development Centre (AMDC)

According to Mugyenyi, rich countries will use COP27 climate talks in Sharm El-Sheikh to prioritize their energy security, including nuclear. He suggests that the African position should demand packages that include nuclear for energy security.

“One of the big issues when talking about nuclear energy and nuclear technology is the governance superstructure because that is critical. We know that from the energy perspective, nuclear is not a fossil fuel. And we need it. But the ability to keep it safe and how it is governed is crucial,” argued Mugyenyi

As the debate about climate change proceeds at COP 27, the contrast is that as a result of the war in Ukraine, the energy security issue in Europe and climate change is driving nuclear power back into the agenda.

“We have seen policies in many countries and regions. For example, in June, there was legislation by the European Parliament to include nuclear in the taxonomy of sustainable technologies,” said Adnan Shihab-Eldin, a Senior Visiting Research Fellow at Oxford Institute for Energy Studies.

“Many European Ministers wrote and said to stay on course for decarbonization, we need a change in approach to nuclear power,” Shihab-Eldin told IPS. “Even countries that still have had strong opposition to nuclear energy like Germany reluctantly announced that the last three power reactors will remain operating.”

Climate Change and Nuclear power 2022 report by the International Atomic Energy Agency (IAEA) observed that over the past five decades, nuclear power has cumulatively avoided the emission of about 70 gigatonnes (Gt) of carbon dioxide (CO2) —equivalent to the emissions from the entire global power sector in the five years between 2015 and 2019 — and continues to avoid more than 1 Gt CO2 annually.

Rafael Mariano Grossi, the IAEA Director General, said countries, international organizations, scientific experts, and other members of civil society are more unequivocal than ever about the key role nuclear energy must play in responding to climate change.

“And the level of public acceptance and advocacy continues to rise. Nuclear now has a firm seat at the table, where it will again be represented by the IAEA at COP27 in Egypt in 2022,” he said

On the other hand, the European Nuclear Society (ENS) Nuclear for Climate COP27 position paper urged negotiators and policymakers at COP27 to take a scientific and technology-neutral approach to energy policy and financing that can promote sustainable collaboration between nuclear and other renewables.

It said Net Zero needs nuclear because nuclear can promote global socioeconomic benefits and can be aligned with the UN Sustainable Development Goals (SDGs).