MEXICO: No Place for Small Farmers at the Supermarkets

MEXICO CITY, May 2 2008 (IPS) - A Mexican coffee grower receives about three dollars per kilogram of unprocessed coffee beans, and the consumer here pays 11 dollars. That price difference, in large part, is the result of the growing power of a handful of supermarkets. 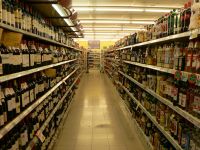 The “autoservicio” (self-service) stores, as supermarkets are known in Mexico, are responsible for sales of 52 percent of food and perishable items in the country. In Mexico City the proportion rises to 70 percent.

These large stores have pushed out the old markets and the neighbourhood shops, according to the federal government’s consumer protection agency. Those stores could disappear within the decade.

The small farmer faces the “voracious and nearly absolute power” of the supermarkets and intermediaries, says Pedro Cervantes, coordinator for Agromercados, a marketing firm whose members include coffee growers with scant resources.

“It isn’t easy to meet the supply requirements imposed by the large supermarkets, and they have a policy of paying the supplier up to three months after product delivery – most small farmers can’t wait,” Cervantes told Tierramérica.

As a result, many coffee growers hand over their product to intermediaries for a lower but immediate pay, he said.

“Sometimes coffee or other farm products pass through the hands of seven or eight before reaching the supermarket in the form and frequency demanded,” Cervantes added.

The U.S.-based mega-store Wal-Mart and Mexico’s Soriana and Comercial Mexicana chains together have 1,800 supermarkets across the country, of which 1,033 belong to Wal-Mart.

The combined Mexico sales of the three in 2007 surpassed 27.7 billion dollars. Their original suppliers are in the countryside, where 5.6 million farmers live and work, and where 75 percent of the country’s poverty is found.

The growing power of the supermarket chains is not just a Mexican phenomenon. Gathering force since the 1990s, it is happening in all of Latin America and the Caribbean, says the International Assessment of Agricultural Science and Technology for Development (IAASTD), published Apr. 15.

The supermarket chains concentrate 50 to 60 percent of all food sales in the region. It is “an extraordinary increase”, considering that just 10 years ago they controlled 10 to 20 percent, according to the study, carried out by some 400 scientists from around the world.

The penetration of the supermarkets is growing by giant steps in the cities, and even in some rural areas, states the report.

The IAASTD says the consolidation of the supermarkets’ presence has widened the gap between the prices paid to the food producer and what consumers pay at the cash register.

This has an impact across society, generating displacement of small farmers, loss of employment and even changes to the cultural patterns of rural dwellers and consumers, says the report, which was sponsored by the World Bank and five United Nations agencies.

The Rural Confederation of Mexico in 2005 and 2006 signed agreements with the supermarkets so that its three million members could sell their products directly to the companies, avoiding intermediaries and losses.

But those agreements failed, announced Confederation spokespersons in January, because the farmers could not comply with the volume and regular delivery schedules imposed by the supermarket chains. Furthermore, payment was much delayed, arriving up to eight months after delivery.

Most of the farmers prefer to deal with the intermediaries, which gather large volumes of products at the central supply site located just outside Mexico City.

Latin America’s largest wholesale market – 304 hectares with 1,489 sales posts and 1,881 warehouses – is where the supermarket trucks arrive daily to get their products.

A small farmer alone cannot abide by the conditions imposed by a supermarket, like delivering large volumes, providing packaging and waiting for deferred payment, says Rita Schwentesius, an expert in global agroindustry at the Autonomous University of Chapingo.

The supermarket chains prefer to buy from the supply centres in the capital and in other cities, although they also receive products in their own warehouses, as long as the deliveries comply with their conditions, Schwentesius said in a Tierramérica interview.

To avoid intermediaries, the government and some local authorities are encouraging and financing the integration of farmers into networks.

But such initiatives have functioned for only a few, agree Schwentesius and Cervantes.

“Most can’t meet the requirements of the supermarkets,” said Agromercados coordinator Cervantes, who was able to establish a group among the members to provide supermarkets with packaged coffee, both whole bean and instant coffees.

In the case of processed products, most supermarkets require the supplier to stock the shelves themselves.

If in three months the sales are slow, according to parameters set by the supermarket, the product is returned and it is very unlikely that they will be able to return to the shelves in the future, chain executives told Tierramérica.

The requirement that suppliers put their own products on the shelves, as well as employing children or the elderly to pack up the clients’ purchases in exchange for tips, are practices aimed at cutting costs.

The IAASTD notes that one of the arguments justifying the existence of supermarkets is that the consumer would benefit from the larger scale, with better products and prices.

In Mexico, the situation could be different. By the late 1980s, when this country began implementing aggressive policies of open trade, the rise of the supermarkets was dominated by a few national chains in partnership, without open competition among them, according to several studies.

Wal-Mart stepped on to the Mexican market in 1991, inviting consumers to compare its prices and services with the other supermarkets.

That strategy was a blow to national competition and led to clashes with Wal-Mart, which in 2002 resulted in its expulsion from Mexico’s National Association of Supermarkets and Department Stores.

Some observers say the presence of Wal-Mart, which now dominates the Mexican market, forced its competitors to lower prices and improves services.

The IAASTD suggests confronting the broad power of the supermarkets, monitoring and analyzing their strategies of self-regulation, and urging consumers to pursue a more fair commerce.