NEW YORK, Jul 26 2008 (IPS) - In his new book on the covert history of Iran’s 1979 Islamic Revolution, award-winning journalist Roozbeh Mirebrahimi says that Western powers, including the United States, accelerated events by recognising and supporting religious revolutionary forces, forcing the shah to leave the country and averting a coup by Iran’s army. 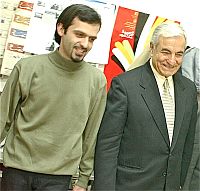 In 1953, the United States had deposed the popular government of Prime Minister Mohammed Mosaddeq and his cabinet via a CIA-backed coup d’état. Anti-communist civilians and army officers supported the coup.

Shah Mohammad Reza Pahlavi’s second departure from Iran, almost a month before the victory of the revolution in February 1979, had dramatically raised concerns among the leaders of the revolution that Washington would try to stage another coup to bring back the shah, who had fled to the United States. However, diplomats who were at the centre of events say that an accommodation was reached between Western countries and Iran’s Islamic clergy.

In an interview with IPS correspondent Omid Memarian, Mirebrahimi said that the role of the West in facilitating the revolution has been largely ignored, particularly by the Iranian government itself. His Farsi-language book, “Untold Aspects of the Iranian Revolution” (Khazaran, 2008) is based on an extensive interview with Abbas Amir-Entezam, the spokesman and deputy prime minister in the interim cabinet of Mehdi Bazargan in 1979.

Amir-Entezam, now Iran’s longest-serving political prisoner, was an ambassador to Scandinavian countries during the hostage crisis at the U.S. Embassy. He was accused of spying for the U.S., arrested and sentenced to death in 1981. This was later reduced to life in prison without possibility of parole. Critics suggest the charges were retaliation against his early opposition to theocratic government in Iran.

IPS: There are rumours of a meeting between the French president’s representative and Ayatollah Khomeini in Paris, prior to the revolution. What was the significance of this meeting?

RM: While Khomeini was in exile in Neauphle-le-Chateau near Paris and leading the revolution, he was asked by the current world powers to meet and to have a dialogue. He raised some demands, including the shah’s removal from Iran and help in avoiding a coup d’état by the Iranian Army. On the other side of the table, the western powers had certain demands too. They were worried about the Soviet Union’s empowerment and penetration and a disruption in Iran’s oil supply to the west. Khomeini gave the necessary guarantees. These meetings and contacts were taking place in January of 1979, just a few days before the Islamic Revolution in February 1979.

IPS: What made these same western countries turn against Khomeini and others just months after 1979 Revolution?

RM: Western powers had been monitoring the political and social changes inside Iran for a long time. They had been trying to understand the internal changes in Iran through the forces they had in Iran or the people they would send to Iran, such as [former U.S. attorney general] Ramsey Clark. They had realised that Iranian society was on the verge of a fundamental change. They chose to accommodate this change. After recognising the opposition groups, they facilitated them with opportunities such as media coverage. Through this action, changes accelerated with an unexpected speed. In the next stage, in order to prevent the Soviet Union from taking advantage of these changes, amongst all existing opposition groups they chose the religious forces to stand against communism, which was anti-religion by nature.

IPS: But why after the revolution did they turn against them?

RM: I would say because of the revolutionary atmosphere inside Iran and actions of the empowered radicals, this relationship faced challenges.

IPS: Why did U.S. officials trust Ayatollah Khomeini enough to negotiate with him?

RM: [William H.] Sullivan, the U.S. ambassador to Iran, was keeping a very close watch over Iran’s internal affairs and analysing all the developments. All the army and military affairs, all the macro-level decisions and reactions by the Shah’s regime, all the activities of the religious forces, activities of the communists, and all other revolutionary forces were monitored by him. According to documents and books published in the United States and other western countries, around September 1978, four months before the revolution, it was clear that the shah could no longer stay, and that they should be looking for a way to reach an agreement with the opposition. All the contacts and dialogues picked up pace during this time. The religious forces that were surrounding Khomeini at the time were people like Yazdi, Bazargan, Bani sadr, Ghotbzadeh or among the clergy, people like Beheshti and Motahhari… They were educated and relatively technocratic and the west felt that they could rely on them. After the revolution, this trust and relationship remained intact until the invasion of the U.S. Embassy.

IPS: Why did the hostage-taking occur at a time when the new government under Ayatollah Khomeini had a normal relationship with the U.S.?

RM: Ayatollah Khomeini was opposed to radical actions such as invading the U.S. Embassy. For example, this was not the first time the U.S. Embassy was occupied. Right around those early days of the revolution, during the first 10 days, the U.S. Embassy was occupied for the first time by the leftist forces such as Khalgh and other parallel forces, but this received a very strong reaction from Ayatollah Khomeini who sent Ebrahim Yazdi to the embassy to get the revolutionary occupiers out of there. During the second incident, Khomeini was caught off-guard after the incident had already taken place. Pressure by the radicals at that time caused Khomeini to react by standing behind it. That incident caused Prime Minister Bazargan to resign. Prior to this incident, the relationship of the new government with the west was still quite normal. We should not forget that exactly one day after the revolution, the United States officially recognised the new government.

IPS: So what kind of an impact did all this have on the Islamic Revolution?

RM: This book has several features. First, it reexamines the Islamic Republic’s portrayal of the history of the revolution, which is a red line in today’s Iran. Secondly, Amir Entezam himself has always been a red line for the regime, which has tried so hard to erase his name from all official records. Thirdly, a person from the new generation, born in the year of the revolution, has done all of this research. And I’m very happy that after five years of all kinds of bans and obstacles, this book is getting published.