LIJIANG, Nov 3 2008 (IPS) - The town at Tiger Leaping Gorge is a ghost town. Clusters of new apartments in mock-Tibetan style with whitewashed walls and ornate flat roofs sit all empty, with gaping windows. The newly widened streets are free of traffic and the surrounding beauty of nature makes for an eerie contrast to the emptiness of the place. 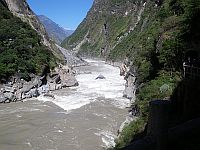 Nestled in the folds of the snow-peaked mountains of Shangri-la and perched over the rushing waters of Jinsha River, the place is so picturesque that it is no surprise it was picked as the perfect retirement spot for local government officials.

They too wanted to retreat from the world in the paradise on Earth that English writer James Hilton made famous in his 1933 fantasy novel "Lost Horizon".

"They (the officials) all bought properties here," says Xiao Luo, a local tour guide from the Naxi minority. "These buildings are all new and were all built for retired cadres. But no one dares yet to come and live here. If the dam gets built this whole area will be flooded."

The dam Xiao Luo speaks of is the one at Tiger Leaping Gorge, which is so narrow a tiger once supposedly leapt across it. And the gorge itself – one of the deepest river canyons in the world on the upper reaches of Yangtze River – or the Jinsha, is almost as famous as China's Three Gorges. It is home to diverse people such as the Naxi, Tibetan, Yi, Han and Zhang ethnic groups. Western explorers like Joseph Rock made its magnificent scenery, flora and fauna internationally famous at the turn of the last century.

Asia's great rivers, Yangtze, Mekong, and Salween, all rise in the high Himalayan Plateau and flow in parallel through this corner of China's Yunnan province. The remote beauty of the place is such that it reportedly took UNESCO's World Heritage Committee less than 20 minutes to decide to include The Three Parallel Rivers National Park on the World Heritage list in 2003.

The honour came to underscore the fragile beauty of a place that has survived endless logging campaigns and the resettlement of hundreds of thousands of newcomers during the three decades rule of communist chairman Mao Zedong. He believed that "man must conquer nature" rather than live in harmony with it.

But a new threat to the area's rich diversity resurfaced in 2004 when the local government announced it wanted to build a dam and power station on the scenic spot of Tiger Leaping Gorge.

Since then the movement against the dam has become a focal point for nascent environmental activism. The opposition against the project rallied local peasants, national media and green groups in a rare demonstration of defiance against powerful lobbies of energy developers and development-oriented officials.

Local villagers even sent a signed petition to Beijing pleading with the central government to roll back the project intended to evict some 100,000 farmers from their land.

Such was the national outcry against the damming of the unspoiled gorge that Beijing appeared to bow to public demand and suspended the project. Premier Wen Jiabao ordered an environmental review of the dam and an investigation into allegations of unapproved construction. Since then, reporting on the fate of the project has died down and local protests have been muzzled.

"There has been a change of parlance," explains local environmentalist Yu Xiaogang.

"Local officials no longer talk of building dams but of transferring water from the Jinsha River to relieve the lack of water in the provincial capital of Kunming. Water transfer projects don't generate money and no one can accuse them of being profit-minded."

The original plan to build a dam on the Tiger Leaping Gorge has been replaced with a new one to dam Jinsha at Longpan, which rings less innocuously. The precise location of the dam – still under discussion – is proposed to be about 150 km upstream of the Tiger Leaping Gorge. All other details such as the building of a cascade of seven other dams downstream remain in place. The proposed series of dams and power stations is supposed to generate 88.3 billion Kwh of electricity a year.

Last November Yunnan provincial governor Qin Guangrong described the planned water transfer to central Yunnan as the "most expensive and difficult engineering project" undertaken by the province since the communist takeover in 1949.

"The proposed water transfer project can only be realised if all eight dams on the Jinsha are built," says Yang Yong, a geologist who studies the development of water resources in China's western provinces. "That leaves little doubt that if the government is serious about supplying water to Kunming, the project would go ahead."

Apart from relieving lack of water in central Yunnan, the proposed damming of the Jinsha is aimed at diverting water to Kunming to clean up the notoriously polluted Dian Chi Lake. The lake was once one of Asia's biggest freshwater lakes, but over the past 50 years it has shrunk to a third of its former size and silted up.

Yunnan has spent billions of dollars on reducing pollution in the lake with little to show in terms of results. Dian Chi is suffering from algae blooms that are destroying the lake ecosystems by depleting the water's oxygen content. Now as the capital Kunming expands, the province is preparing to invest even more – 49 billion yuan (7.2 billion US dollars) – on a costly water diversion project from the Jinsha River.

"The length of the diversion project is nearly 600 km, which makes it expensive and difficult," says Yu Xiaogang who runs the Kunming-based NGO "Green Watersheds". "Local officials have mobilised a lot of propaganda to justify the cost. They say the livelihoods of 10 million people in central Yunnan are worth the uprooting of 100,000 people at the Tiger Leaping Gorge."

The new site for Longpan dam is supposed to result in the displacement of less people – an estimated 20,000 mainly minority people – than the original plan for the Tiger Leaping Gorge dam. Experts say the impact on forests and the ecological diversity of the area would be equally severe. They suggest there are other potential solutions to the lack of water in central Yunnan that could minimise the need for water diversion from the Jinsha.

"There has been an explosion of energy-intensive industries in the province in recent years, many of them transferred from the eastern coastal areas where both power and resources are being slowly depleted," says Yang Yong. "One needs to treat the existing pollution first and keep the growth of polluting industries in check before green-lighting such (water diversion) projects".

A stop at the ancient trading town of Shigu where the Yangtze River makes its first bend reveals that local residents are unhappy about their success in fighting the pending dam project. Authorities are wary of protests against the dam. Three police cars patrol the small market place and the steps to a grand monument dedicated to Red China's Long March.

"Policemen watch us all the time," says local woman Chen Jing furtively. "They don't like us talking to foreigners and outsiders very much".

The spot is a tourist destination. It is here that in 1235, Kublai Khan led his invading Mongol armies to swim across the Yangtze river on inflated rawhide bags. It is also here – at Shigu – that the guerrilla armies of Chairman Mao Zedong crossed the fast waters of Yangtze during their Long March up north in the 1930s.

But while locals sell fruits and hand-made trinkets to the tourists they avoid chatting with them. The atmosphere feels tense.

"Everybody is still unsettled about the dam," a shopkeeper selling funeral wreaths, who gives her name as He, shares reluctantly. "People are poor and they don't want to be made to give up their land to move up the hills. There is nothing much they can grow there."