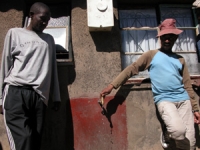 In the Western Cape, the City of Cape Town has started to roll out Water Management Devices (WMDs) in townships, meters programmed to dispense a daily, pre-agreed amount of water. This, the municipality hopes, will reduce water wastage and assist poorer households in managing water usage.

Pre-paid water meters allow households a free basic monthly allowance of 6,000 litres of water before shutting off automatically. Residents then have to pay for more water. In April 2008, A Johannesburg court found that forcibly installing pre-paid meters denied people their constitutional right to water; Judge MP Toska also ruled that the free basic water allowance – calculated at 25 litres per person per day – is insufficient for township residents.

"WMDs are nothing more than pre-paid meters in drag," lamented Elias Mkhwanazi, coordinator of the Western Cape Water Caucus (WCWC), an organisation representing a number of NGOs, grassroots community organisations and trade unions.

Officials from the City’s Department of Water and Sanitation reject residents’ complaints, insisting WMDs are a much better solution because they provide residents with an agreed-upon daily water allowance. When it has been used, the flow stops until the following morning.

Some community leaders, like Sulyman Stellenboom, have re-named the WMDs "weapons of mass destruction" because they feel they destroy poor communities. "These devices are taking us back to the days of apartheid when we used the bucket system," explained Stellenboom referring to how, under the apartheid government, members of informal communities who had no access to running water had to walk for kilometres to collect water for cooking, drinking and bathing.

Stellenboom, who has been lobbying local government to reinstate ordinary water meters in a government housing project in Mitchell’s Plain near Cape Town, to ensure that township residents gain access to the same facilities and devices than residents of better-off neighbourhoods and suburbs.

According to the WCWC, the City of Cape Town spends eight times more on providing water to predominantly white, middle class suburbs such as Durbanville, than to townships such as Khayelitsha.

"We refuse to pre-pay for water, but we are willing to be billed at the end of the month," he said. The local Department of Water and Sanitation claims that the devices are only installed in households that cannot afford to pay monthly water bills.

Township residents believe, however, the WMDs ultimately lead to higher water bills at the end of the month. Mkhwanazi says he knows of numerous residents classified as "indigent" because they are unemployed or earn less than $100 per month who are slapped with water bills of more than $200 for a period of eight months, even when they are living in houses that are fitted with just one tap.

Water and Sanitation department director, Lungile Dhlamini, claims that exorbitant bills are caused by poorly-built housing and the prevalence of leaks. "The City then intervenes, fixes the leaks and writes off the debts giving those households a new beginning, so to speak," he stated.

But according to Stellenboom, this is certainly not the case in Mitchell’s Plain. Instead, community members repeatedly receive "pink letters", or summons.

Another Mitchell’s Plain resident, Tanya Smith, who shares her small house with six other family members, including a sick uncle, complains that the WMD system causes frequent water cut offs – sometimes for weeks at a time and for no apparent reason. "How can we live like this? How can I raise my child when there’s no water?" asked Smith.

Her objections are supported by other residents from Atlantis, Delft and Mfuleni who say they are experiencing cut-offs after using a mere 20 litres of water.

The statements stand in contrast to information provided by the City of Cape Town, which claims to provide 25 litres of water per person per day, free of charge. Yet, Dhlamini concedes that there have been rare instances when the WMDs were not properly installed, which he says may have caused water cut-offs.

Water activists and community leaders say WMDs are a clear violation of the right to free basic water, stipulated in the South African Water Act, which specifies that no person should be without water for more than seven days. On average, a person needs 94 litres of water per day for basic needs such as drinking, cooking and bathing.

Although it started out as a pilot project, the City of Cape Town is now in the process of routinely installing WMDs in townships, allegedly without any community consultation, and has made it mandatory for low-cost houses to be fitted with the device.

While the City claims that the devices are installed free of charge, Mkhwanazi showed IPS receipts that prove residents have been billed about $80 for installation of a device they didn’t want in the first place.

WCWC is calling for government to stop penalising poor people who cannot always afford to pay for basic services like water and to consult with communities on water management policies.

Stellenboom who has become increasingly frustrated with poor service delivery says if the City does not start taking residents’ issues seriously, WCWC mobilise and take mass action: "Why don’t those meters go up in rich areas? I have told the mayor, Helen Zille, that we will rip them out if we have to."