ZIMBABWE: 'Let Us Farm, It's Our Job'

WINDHOEK, Jun 16 2009 (IPS) - A regional tribunal in Namibia has referred a controversial Zimbabwean land case to the next Southern African Development Community Summit of Heads of State, rejecting a last-minute application for postponement by Zimbabwe on Jun. 5. 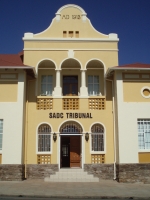 SADC Tribunal Offices in Windhoek: many are sceptical that the latest ruling will be respected. Credit: Servaas van den Bosch/IPS

The farmers who brought the case to the tribunal are eager to resume production amidst continuing farm seizures.

In his ruling, presiding justice Ariranga Pillay from Mauritius referred to a Nov. 29 judgement in the case of Mike Campbell & Another vs. the Government of Zimbabwe, which ordered the government to allow 75 white farmers to stay on their land and compensate three others whose farms were already expropriated. A day earlier, the court reserved judgement in the case of Luke Tembani, a black Zimbabwean farmer whose farm was also taken.

That November ruling condemned Zimbabwe’s land reform programme as discriminatory and in breach of the SADC Treaty and held Harare in contempt of court.

The latest judgement cites the continued violations of the order and President Robert Mugabe’s public statements that the tribunal’s decisions were "nonsense" and of "no consequence".

Since December 2008, 155 farmers have been in the dock Zimbabwe for ‘illegal occupation’ of their property.

In what will be a test for the regional organisation, the judges referred the case to the SADC Summit to be held in the Democratic Republic of Congo in August.

In March, SADC suspended Madagascar from its ranks in reaction to a coup d’etat by Antananarivo mayor, Andry Rajoelina, but on the topic of Zimbabwe, Southern African leaders have remained mum.

"The judges are getting fed up and it is an embarrassment for Zimbabwe, but it is not sure whether SADC will act", says Chris Jarrett, one of the expropriated farmers and vice-president of the Southern African Commercial Farmers Alliance (SACFA). "SADC might refer this to a ministerial study group, never to be heard of again."

Meanwhile production in the region’s former breadbasket has halved, while living standards have dropped 80 percent over the past decade according to the Zimbabwe Papers, an assessment of the current situation in the country by nine African think tanks. Unemployment stands at almost 90 percent. More than half of the population is dependent on food aid.

Commercial farmers, who put their stock in Morgan Tsvangvirai’s Movement for Democratic Change (MDC), now complain that the four-month old unity government has not brought any improvement in the embattled agricultural sector.

They told the court of beatings, arson, intimidation and shootings of farm workers in recent months, as well as theft of equipment, forging of expropriation papers and illegal imprisonment.

"MDC is terrified to stick its neck out and back the tribunal," says Jarrett.

Farm invasions have continued and the farmers accuse Tsvangvirai of downplaying the issue in order not to scare off foreign donors. Zimbabwe’s prime-minister on Jun. 7 embarked on a world tour to garner support from Western governments.

"The same government that destroys the production goes begging for support we don’t really need," says Deon Theron, vice-president of the Zimbabwe’s Commercial Farmer’s Union (CFU). "Put us back on the farms and we will start producing again."

"We have to get back to good old economics, take something out of the ground and add value to it," agrees Jarrett.

But the farmers admit this is unlikely. "Ministers will come to your farm and agree it’s scandalous, but nothing will be done," argues Ben Freeth of Mount Carmel Farm in Chegutu constituency.

According to Theron, the government’s ‘100-day plan’ to turn the agricultural sector around is ‘unrealistic’.

"We will not be able to feed ourselves and our own government prevents us from producing food. If SADC does not act now people will die of hunger and of disease and the region will have blood on its hands".

Of the 4,500 white farmers in Zimbabwe, some 400 are left in the country. "Farmers usually seek refuge on a relative’s land," says Peter Etheredge of Stockdale farm in Chegutu. "Perhaps 10 percent of the land is actively used."

Etheredge lost his farm to Edna Madzongwe – chief of the Zimbabwean Senate and a heavyweight in Zanu-PF – in May. "As a consequence we have not been able to harvest. Six thousand tonnes of fruit, valued at four million dollars, are lost. She moved in just before the harvest, to reap what we sowed."

Norman Tjombe from the Legal Assistance Centre in Windhoek helps Zimbabwean farmers to bring their case before the Tribunal. "Land reform needs to happen, but it’s not just about a legal framework. In Zimbabwe, as well as in Namibia and South Africa, race is the determining factor and that leads to an extremely dangerous situation. We need to get back to the drawing board.

"Between 1980 and 200 only the Zimbabwean elite benefited from land reform. This led to a popular uprising. Exactly the same patterns are emerging in Namibia and South Africa where spontaneous invasions are starting to occur."

But Tjombe is sceptical that the court ruling will be upheld. "This is about Mugabe’s political survival, if 78 farmers are allowed to stay or get restitution, what about the 4,000 that have left?"