BUKAVU, DR Congo, Oct 17 2011 (IPS) - Angeline Mwarusena, 61, sits on a small wooden bench in front of her hut, head bent, shoulders slumped. Her voice is barely audible. Four years ago, three soldiers from the Democratic Forces for the Liberation of Rwanda (FDLR) entered her home, hit her and raped her repeatedly. One after the other. 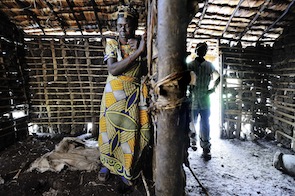 “Since then, every time I hear a noise, I jump. Every night, I am hiding in the bushes because I’m scared they will come back,” says the mother of nine who lives in Katana, a small village near Bukavu, the provincial capital of South Kivu in eastern Democratic Republic of Congo (DRC).

For a long time, the militia returned every two weeks to steal the villagers’ harvest and livestock, raping and killing everyone in their way. They still descend upon the village regularly, says Mwarusena.

The trauma has left both emotional and physical scars. For three long years, Mwarusena had to be treated for vaginal fissures, so roughly was she violated. Since the rape, Mwarusena, who used to be a cassava vendor, has been living in utter poverty, as she does not dare leave her village to work in the fields.

“It’s a miserable life. I would prefer to die,” she whispers.

About 50 kilometres south, at Bukavu’s Panzi Hospital, the wards are filled with survivors of sexual violence. Each of them has a similar story to Mwarusena’s.

Although no reliable rape statistics exist for the DRC, the hospital director Dr. Denis Mukwege can reveal that in 2010, 4,500 raped women checked in to Panzi Hospital alone. He believes there are thousands more who never report the crime or seek medical assistance.

“The majority of women will never appear in any statistics,” says Mukwege.

Years of bitter war was waged between the Congolese national army and a wide range of militia groups from the DRC and neighbouring countries that tried to gain control over political power and the country’s natural resources. The conflict left four million dead and traumatised large parts of the population, especially in the eastern part of the country, which shares a border with Rwanda.

Even though the DRC has been officially at peace since December 2002, when warring parties signed a peace deal, followed by a second peace accord signed in North Kivu in June 2008, the fighting in the Central African nation has not come to an end.

Conflicting national and international interests in the country’s vast mineral wealth keep the country, and particularly eastern Congo, unstable. The DRC has a third of the world’s cobalt and diamonds, 70 percent of the world’s coltan, used to produce electronic components in computers and mobile phones, as well as large amounts of gold and copper.

But there are also political reasons for the ongoing violence. The Rwandan rebels of the FDLR have remained operational and withdrawn to the forests and mountains of eastern Congo, preparing to return to power in Rwanda one day, from where they fled after the country’s 1994 genocide. As an isolated group, the FDLR relies on looting villagers’ livestock and harvests to feed its troops.

“Rape is used as a means of psychological warfare to terrorise the population, make people submissive. There are regular mass rapes of entire villages, while the men are being killed,” explains Zawadi Nabintu, the manager of Dorcas House, a facility for abused women adjacent to Panzi Hospital.

With the help of counselling and psychosocial therapy that includes income-generating activities, Nabintu’s team tries to help survivors of violence to reintegrate back into society.

“We are dealing with a double problem here, because most women are rejected by their families after being raped. So we are trying to help them to become (financially) independent,” says Nabintu.

One of her patients is 17-year-old Sarah (not her real name). Three years ago, militia broke into the girl’s home in Bunjakiri, 80 kilometres northwest of Bukavu. The soldiers raped her and murdered her parents in front of her eyes.

“The men abducted me, repeatedly raped and beat me and held me hostage as a forced labourer in their camp,” she says. By the time Sarah managed to escape, a month later, she was pregnant.

Today, the teenager lives at Dorcas House with her two-year-old daughter, who she has named Baraka, “Blessing” in Swahili, despite the baby being a product of rape. With the help of a psychologist, Sarah tries to work through her trauma and has returned to school.

The support she received at the facility has given her new hope. “After I graduate, I want to study medicine so that I can heal people,” she says.

But most women and girls need to cope with less support. According to a yet unpublished 2011 United Nations Population Fund report, 17,500 people have been raped in the DRC in 2009, or 48 were raped per day.

“Which makes it the country with the highest number of rapes in the world,” says Audrey Shematsi, women’s rights manager at Action Aid Goma in North Kivu, a province equally affected by rape and violence as South Kivu.

Most cases go unreported, while only roughly 10 percent are referred to criminal courts, with even less ending in convictions, adds Shematsi: “There is no justice for women. The justice system isn’t accessible. Corruption is a fact. Cases are drawn out over weeks, months, if they are finalised at all.”

Without justice or peace, women in eastern DRC remain one of the most vulnerable population groups in the world.