KARACHI, Nov 5 2011 (IPS) - He could be Pakistan’s Obama, although he spews venom at the United States government for its drone attacks and its policies in the region. But Imran Khan speaks of change and, like Obama, enjoys huge online support from the youth. 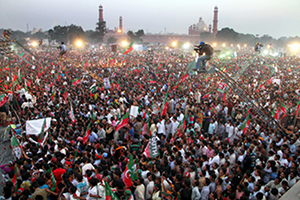 A rally in support of Imran Khan in Lahore. Credit: Rahat Dar/IPS

It was this section that (using the hash tag #OMP on Twitter for ‘Occupy Minar-e-Pakistan’) encouraged others to attend the former cricket idol’s historic rally in Lahore city on Oct. 30. After he managed to sway a 100,000-strong crowd, with his ‘Save the Country’ rally, Pakistan’s political players have new respect for Khan. The cricketing idol-turned politician, they admit, is now a force to reckon with on Pakistan’s turbulent political scene.

“Electrifying!” is how Atif Rafiq, 28, described the rally in Lahore, capital of Punjab province. “The crowd hung on to Imran Khan’s every word, and cheered, as he unfolded his party’s agenda that included wiping out corruption.”

Rafiq had saved up to fly all the way to Lahore from Karachi, but thought that the expense was well worth it. “He gave hope and change a whole new meaning.

“It was an educated and well-mannered crowd.”

Many believe that whether Khan’s political enterprise succeeds or not he will be a game changer in Pakistan’s next elections, due in 2013.

A.H. Nayyar, who teaches at the Lahore University of Management Sciences, believes Khan’s party, the Pakistan Tehrik-e-Insaf (PTI) or Movement for Justice is likely to be “among major political players in the next elections,” though it will “not gain a clear majority.”

“If it does not, and makes alliances with others, it will subvert its own distinct programme of good governance and anti-corruption,” Nayyar, a respected commentator on public affairs, observed. “It will be PTI’s biggest dilemma.”

“You cannot bring in change unless you are in the government, and when you are in government, you need to compromise with unsavoury political elements,” Nayyar told IPS.

The “tsunami” Khan referred to in his speech comprised college-going urban youth and women – both missing from previous political processes. Of Pakistan’s 180 million people, two-thirds are under 30 and many who attended the rally would become eligible to vote for the first time in 2013.

“The rally showed that the old political configuration is changing. You have to factor in the young, urbanised Pakistani clamouring for good governance,” tweeted Raza Rumi, a blogger.

Others say the Pakistan Muslim League – Nawaz (PML –N) party of former prime minister Nawaz Sharif, which rules Punjab, may have to rethink its political strategy.

Using cricketing metaphor, Chaudhry Nisar Ali, leader of the opposition, belonging to the PML(N), said politics was not a “20-20 match” and no “ball tampering” would be acceptable.

Khan’s PTI is bound to cause problems for the centrally-ruling Pakistan People’s Party as well.

Calling Khan a “viable alternative” to the current set of political parties, Nayyar said those presently marginalised, like the Jamaat-e-Islami (a religio-political party), will likely extend support to him to find a “niche for themselves.”

Even the “civil and military institutions” would be very comfortable with his “nationalism-based conservatism,” Nayyar predicted.

At 58, Khan’s political career spans 15 years from the day he founded the PTI. The party boycotted the 2008 general elections after the then president Pervez Musharraf summarily sacked and then refused to reinstate the chief justice of Pakistan.

Fouzia Nasir Ahmed, a Karachi-based journalist, who sat through the entire three hours of speeches (by various party leaders) interspersed with songs, said: “This is his time to strike – while the iron is hot.” “Khan is banking on those fed up with the two biggest malaises in Pakistan – corruption and mal- governance,” said Nayyar.

Ahmed, however, has full faith in Khan. “Everyone knows him to be an honest man, hardworking and with great organisational skills, of which Namal College and Shaukat Khanum cancer hospital are living testimonies.”

Farah Zia, editor of ‘The News on Sunday’, a weekly magazine of the English-language daily ‘The News’, who was present at the rally, refuses to be swayed by the numbers.

“I didn’t see the poorest of the poor. I didn’t see men or women in old, grubby clothes; I didn’t see anyone without slippers…when Imran Khan greeted the common Pakistani, I looked around but none was visible,” she said.

Instead, Zia saw young men and women clad in jeans and T-shirts. “The crowd smacked of affluence,” she told IPS.

Nayyar was not impressed with Khan’s speech. “His slogans and promises did not contain anything new. No marked addition to what he has been saying all the time…mostly vague…and with a strong dependence on nationalistic fervour.”

Said Zia: “Khan wants to root out corruption and end power outages; he talks about bringing back politicians’ assets lying in foreign banks; he says he will ensure education and health to the remotest of villages of Pakistan…all that is very commendable, but what is the plan of action and does he have one?

“I found his statement on various issues to be over-simplistic, and hence appealing to the youth of today. For example, if the U.S. leaves Afghanistan, things will become fine. Fine for whom?” Nayyar asked.

There are those who argue that Khan is a novice in Pakistan’s dynastic politics. On the other hand, that may be the very reason why many Pakistanis are attracted to him.

“That is his biggest plus, if you ask me,” said Farahnaz Zahidi, a new member of the PTI, speaking with IPS. “Look at the seasoned politicians…they take more and give less to the country.”

Nayyar said while Khan may have endeared himself to many women, speech had no “definitive statement on the status and rights of women.”

He termed Khan’s plans to give women their rights and work towards their education “the vaguest possible statement.”

“Even mullahs (clerics) say they are in favour of education for women and the rights of women. But what rights and which kind of education is what matters,” he quipped. “It is well known that he (Khan) is pretty conservative on this count,” he added.