ARGENTINA: Water – Some Waste It, Some Want It 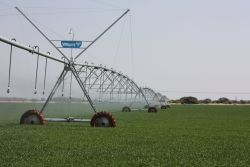 Agriculture accounts for over 70 percent of water use in Argentina. Credit: Patrick Burnett/IPS

BUENOS AIRES, Dec 14 2011 (IPS) - In Argentina, the availability of water far outstrips demand, yet 11 percent of the population still lacks piped water, while a large proportion of the rest squanders it without a second thought.

Agriculture accounts for over 70 percent of water use in Argentina. Credit: Patrick Burnett/IPS

So says the report of a research study carried out by the environmental organisation Green Cross Argentina (GCA), published in late November and titled “Agua: Panorama General en la Argentina” (Water: A General Overview in Argentina), by four experts.

Marisa Arienza, head of GCA and one of the authors of the study, told IPS that in recent years there has been “substantial improvement” in the provision of access to clean water, but there are still pending challenges.

“The main problem is inequity of water access. This has a terrible effect because when a family does not have access to drinking water, they drink polluted water from wells, with the result that they suffer from diseases and even disabilities,” she said.

At the inauguration of a sewage treatment plant in Moreno, on the western outskirts of the capital, the president emphasised the plant “is not only new urban infrastructure, but also contributes to the environment and health.

“When piped drinking water and sewage systems are put in, people get sick less; these are real, concrete facts,” she said. However, more infrastructure is needed to ensure everyone has access to these basic services.

The scenario in Argentina is similar to that of the rest of Latin America, where there are also deep inequities, although in some countries people waste less water, and in others the works to improve access to water still lag far behind.

According to the GCA study, in Latin America, where water is abundant, 38 million people – nearly seven percent of the population – are without access to safe water. In some cases they have to spend long hours every day fetching water.

This is also true in Argentina, where plentiful water supplies coexist with unequal access, wasteful use and pollution with agricultural chemicals, sewage and industrial effluents, the study says.

The availability of water is not evenly spread throughout Argentina. Some 85 percent of the total surface water used is drawn from the Rio de la Plata basin, which extends from Bolivia to the Atlantic ocean, covering parts of Bolivia, Brazil, Argentina and Uruguay and the whole of Paraguay.

But there are arid and semi-arid areas in the northwest, centre-west and south of Argentina, where water is scarce and people are more aware of the need to look after it and use it sparingly.

“The value of drinking water is usually not adequately appreciated in Argentina, although the cost of treating it requires large investments and foreign loans. A lot of water is wasted, especially in the cities,” Arienza said.

The lack of stewardship of this resource in Argentina becomes evident when water extraction capacity and consumption per person are compared for Argentina and Brazil.

According to the study, Brazil can extract 6,950 cubic kilometres a year, and on average each Brazilian consumes 216 cubic metres a year.

In Argentina, in contrast, withdrawal capacity is 994 cubic kilometres of water a year, much lower than Brazil’s, while consumption is 745 cubic metres per person per year, more than three times the level in Brazil.

In any event, not everyone in Argentina benefits from an abundant water supply, as there are areas in the north of the country and in the poorest and most populous districts on the periphery of Buenos Aires where there is still no access to water.

According to Arienza, in recent years there has been “a great leap forward” in investment, which has raised the proportion of the population with access to piped water from 66 percent in 1991 to 89 percent today.

She also said that the idea is now catching on that water and sanitation are two sides of the same coin. This is a relatively new concept because up to 10 years ago, access to water was prioritised almost exclusively.

“It used to be thought that the main thing was access to water, but now water and sanitation are seen as a linked issue, because going ahead with water pipes alone causes groundwater to become polluted with effluents,” she said.

The deficit in sanitation provision was previously highlighted by Dan Adaszko, a research scholar at the Argentine Catholic University’s (UCA) Observatory on Social Debt, in his study on “Las condiciones habitacionales y de acceso a bienes y servicios en la Argentina 2010” (Housing Conditions and Access to Goods and Services in Argentina 2010). Adaszko told IPS that the lack of not only housing but also of access to urban services, although they have improved in recent years, “is an irrefutable indicator of backwardness.”

He pointed out that the percentages of the population lacking access to water and sanitation are national averages that cover up much higher levels among poor households, which also have to cope with additional deficits, like higher exposure to pollutants and open air garbage dumps.