CAPE TOWN , Jan 27 2012 (IPS) - If there was no HIV/AIDS, South Africa would have 4.4 million more people than today, the size of a major city. This significant slow-down in population growth is causing a slow down in economic growth and resulting in social ills, researchers warn. 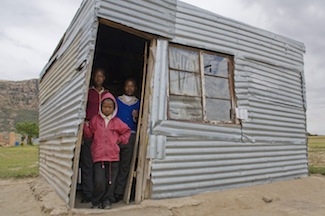 New data by research organisation South African Institute for Race Relations (SAIRR) show that South Africa should theoretically count 55 million citizens this year. But it only has a population of 50.6 million.

By 2040, the country’s population would have been 77.5 million without AIDS – 24.1 million more people than is projected for that year.

“The decrease of population growth has a negative impact on South Africa, because the group most affected by HIV and AIDS is aged between 15 and 49 years, which is the most productive part of the population,” explains SAIRR researcher Thuthukani Ndebele of the date published on Jan. 23.

“If this age group continues to die early, we will see an acute social and economic impact throughout the country,” he warns. South Africa was quickly losing large chunks of its workforce and skills, which led to loss of productivity.

The institute’s analysis – which is based on statistics sourced from the Actuarial Society of South Africa and the South African Institute for Futures Research – shows that almost a third of all deaths in 2011 were AIDS- related. By 2025, this proportion is expected to rise to a whopping 121 percent more AIDS deaths than there were in 2000, according to SAIRR.

Economic experts have no doubt that this will slow down economic growth. “An epidemic like this one, that effects a large proportion of the population, has undeniably a negative economic impact,” confirms David Hornsby, a researcher of the Department of International Relations at the University of the Witwatersrand in Johannesburg. “It limits the amount of educated and skilled people who participate in production, entrepreneurism, innovation and development.”

SAIRR further predicts that the total number of people living with HIV/AIDS will reach six million in 2015, which is double the number recorded in 2000. “This should be a serious wake-up call for South Africa. It would be a serious crisis for the country’s economic and social development to reach such a high number of HIV infections and related deaths,” says Hornsby.

Not only does HIV/AIDS reduce life expectancy and increase mortality, but it is largely responsible for wider social ills such as orphanhood and child-headed households. In 2009, about two million South African children had lost one or both parents, according to United Nations Children’s Fund (UNICEF).

“Almost a third of South Africa’s population, or 31 percent, is under the age of 15 today,” highlights UNICEF chief of child survival and development Dr. Siobhan Crowley. “This signifies a serious population imbalance. And the South African government is struggling to provide the support those young people need, in terms of education, social welfare and health services.”

The large number of orphans in this age group as well as households led by grandparents have started to create an increased level of dependency on the social welfare system, which demands an ever bigger growing slice of the country’s national budget.

“Issues like social welfare, health, food security, poverty and housing are all tightly interlinked,” says Roeland. “If the long-term investments in our people, especially in our children, are not thorough enough, the social system might eventually collapse.”

SAIRR researchers say they are particularly concerned about the increased burden HIV/AIDS will have on the public health system. According to the World Bank, South African spent almost nine percent of its GDP on health in 2009 – almost double the amount than most developed nations. This percentage might increase in the near future even further.

“Nine percent a significant amount. Health budgets might have to increase even further, if governments wants to prevent HIV/AIDS having an even more negative impact on the economy than it already has,” says Ndebele, pointing out that because HIV-positive people live longer due to live-saving treatment with antiretroviral (ARV) medication, they also incur large amounts of health care expenditure before their deaths. “AIDS deaths therefore cost government a lot of money. It’s not like dying in a car accident,” says Ndebele.

But there is also an upside: increased access to ARV treatment does help HIV-positive adults to stay economically active for longer, thus alleviating other costs to the social system.

Experts from research, economic and social sectors therefore all stressed the urgent need to make a bigger effort to prevent new HIV infections – as the only way to effectively reduce the costs of the illness places on society.

Says Ndebele: “South Africa has 0.7 percent of the world population but accounts for about 17 percent of all HIV cases globally. That correlation is worrying and needs to change.”