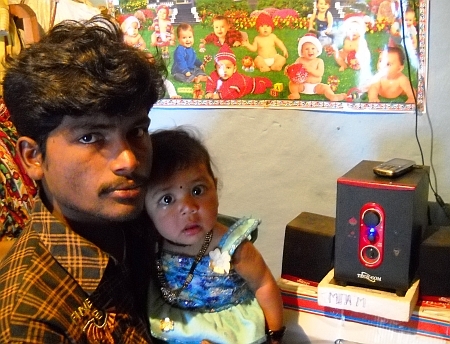 KONARK, India, Feb 9 2012 (IPS) - Fisher Wanka Masani, 25, has been inseparable from his two- dollar transistor ever since a community radio (CR) station started up in this coastal town. The square black box blares popular songs while Masani waits for his brothers to land the daily catch.

Radio Namaskar (the traditional Indian greeting), on the air since February 2010, offers much more than entertainment to the 2,000 active fishers from a 10,000-strong settlement of mud hut dwellers along Odisha state’s Chandrabhaga coastline on the Bay of Bengal.

Cyclonic storms often threaten the fragile vessels of the fishers, and their lives. Television weather forecasts are unreliable because power supply in these parts is erratic.

“Radio Namaskar broadcasts high wind and cyclone warnings at short intervals; its range extends 35 km out into the sea,” says Gengri Mania, 40, who carries a radio when he accompanies his brother-in-law on fishing trips.

Heavy rains and high floods often leave families stranded and huddling on rooftops, sometimes for days together, as happened in the Gop administrative block in September 2011.

“Radio Namaskar’s dedicated mobile phone line was a life-saver,” says Ali Akbar Shah, 37, whose house was among the first to be hit by a huge body of water when the Kushabhadra river embankment was breached.

Shah managed to grab a brace of seven mobile phone sets from his mobile repair shop with which he kept up staedy communication with the CR on all the three days that he and his neighbours were stranded on rooftops.

“The local mosque announced the breach at 9.30 in the night. We just had time to move the sleeping children and essentials to the asbestos roof when the rooms started filling with water,” remembers Shah.

Artarana Behera, who runs a bicycle repair shop in nearby Helari village, also hit by this flood, says his joint family of 13 members, including his aged parents and small children, had to seek refuge on his roof.

“We survived on two kg of beaten rice that we ate on the first day and kept up communication through Radio Namaskar’s community phone call number 9040904904 dedicated to SoS messages from flood victims.”

More than a thousand calls were recorded from flood-affected people on this dedicated phone number over that week.

Identifying from these calls spots where relief material was needed on priority, the administration rushed food packages, candles and tarpaulin sheets for shelter from the rain.

“Radio Namaskar broadcast flood updates every 10 minutes, 24X7, for the three days that the water level stayed high. The administration too used the CR to make announcements. I am happy I could be of service,” says Shah.

After Radio Namaskar’s crucial role as intermediary between stranded victims and relief and rescue operations on the other, many villagers saw the CR on FM 90.4 MHz frequency as a saviour and bought the two- dollar sets made by a firm in Kolkata city and already selling well there.

Subas Nayak, 34, Konark Municipality Councillor, representing the fishers’ community, says CR has transformed life on the coast and helped fishers from being cheated by middlemen.

“The five local cold-storage owners who are also big fish buyers would decide on prices of commercial varieties prior to fish landings everyday and control the auction prices,” Nayak said.

The fishers could do nothing because they had no infrastructure to hold their catch. But, once Radio Namaskar began announcing daily prices of fish varieties in the markets of Kolkata city, where Konark’s fish catches are sold, the game was up. The fishers now have a say in deciding fair prices.

The popularity of the CR can be gauged from its most popular programme ‘Janata Darbar’ (People’s Court) and ‘Sir, Tike Sunibe?’ (Sir, Can you Kindly Lend Your Ear?) on which communities air their problems and grievances through focused 30-minute discussions, seeking redress from government agencies or elected leaders.

All the 72 listener groups are led by women, he says, adding: “We want women to be the change makers in our predominantly rural setting.”

The women’s groups ensure quality food reaches the ‘anganwadis’, a government scheme that provides food supplements to children, pregnant and lactating mothers. They intervene to get dalit (low caste) girls admission into schools and widows get their pension.

Programmes are broadcast at listener-convenient timings for eight hours daily, covering youth, local self-governance, agriculture and citizen rights and recordings on compact disc handed over to the local administration for action.

Because of limited funds, the CR runs its programme entirely through 25 volunteers, ranging from Narayan Das, 62, a retired school teacher, to 18-year-old Sharup Saha, a student.

“Neither the federal government nor funding organisations have any specific policy in place yet for funding CRs in India,” laments Ansari.

The initial funds too were hard to come by: of the 22,000 dollars invested half came from Radio Namaskar’s parent organisation, Young India, while the rest was loaned interest-free by other non- government organisations.

“Revenue from government advertisements is eyewash. We get a pittance and payments are invariably delayed,” says Ansari who is now looking at private advertisements, allowed for 5 minutes per hour of broadcast, as additional revenue.

For now, garnering listenership by being relevant to the community is Radio Namaskar’s main focus, he said.