GENEVA, Mar 17 2012 (IPS) - India, Brazil, and South Africa, the international grouping for promoting international cooperation among the three countries known as IBSA, along with China and several other developing countries, have denounced the ongoing attempts to craft an exclusive, plurilateral agreement to liberalise trade in services without concluding the multilateral trade negotiations of the World Trade Organization. 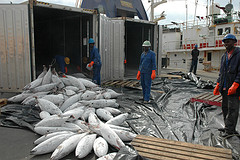 The plurilateral initiative, say trade envoys from the IBSA bloc, is likely to cause irreparable damage to Doha trade negotiations in particular, and the WTO in general. The Doha negotiations aim to achieve reforms of the international trading system through the introduction of lower trade barriers and revised trade rules. Besides, the negotiations were launched for providing developmental dividends to developing countries for integrating into the global trading system.

In sharp contrast, the proposed plurilateral agreement for services, which aims to seek WTO commitments for the 16 countries part of the initiative, will turn the clock back for providing the much-promised developmental gains from the poorest and developing countries.

Ahead of the current turmoil in global trade negotiations, the IBSA trade ministers warned that that “plurilateral initiatives go against the fundamental principles of transparency, inclusiveness, and multilateralism.”

The RGF coalition will hold their third brainstorming session on Mar. 21 to prepare the ground for a plurilateral services agreement outside the WTO. Though the contours of the form and substance of the proposed agreement are not clear yet, the coalition appears determined to achieve an outcome based on the highest common denominator, say trade envoys from the coalition.

The IBSA countries have not adopted any formal position on the ongoing plurilateral initiative of the RGF coalition. But trade envoys from the respective countries spoke against the dangers it would pose to the multilateral negotiations in general, and the Doha trade negotiations in particular.

“We don’t think that plurilateral initiatives will comply with the requirement of transparency and inclusiveness, which is the basis for any multilateral process,” Brazil’s trade envoy to the WTO, Ambassador Roberto Azevedo, told IPS. “Brazil doesn’t believe it is a building block for the resumption of multilateral negotiations and on the contrary it would make that even more difficult.”

The plurilateral route for an agreement on services will undermine the “balance” in the Doha trade negotiations, said Ambassador Jayant Dasgupta, India’s trade envoy. South Africa’s trade envoy Ambassador Faizel Ismail expressed concern that a plurilateral agreement will undermine the much- promised “developmental” outcome in the Doha trade negotiations.

Even the EU, which is taking an active part in the current RGF plurilateral initiative remains uncomfortable. “Our line is that we should not take initiatives that undermine the WTO because the WTO is very important for trade,” the EU’s trade commissioner Karel de Gucht said on Mar. 12.

Under the WTO’s General Agreement on Trade in Services (GATS), which governs global trade in services, any group of countries can strive for economic integration by seeking higher and deeper services commitments among themselves.

In the past there were open-ended plurilateral agreements such as the WTO’s Information Technology Agreement involving liberalisation of trade in various electronic goods, and the telecom services agreement.

The ongoing exploratory talks among the 16 countries are taking place at a time when the WTO members have not been able to conclude the much-promised Doha negotiations, which were started in 2001.

A continued stalemate in negotiations between a large majority of countries seeking a palatable outcome and one major industrialised country making “maximalist” demands has put paid to an early conclusion, said trade diplomats.

As opposed to multilateral negotiations in which all members have an equal say, at least on the paper, the plurilateral process involves closed-door negotiations among select-members. The U.S. and other major industrialised countries, however, reckon that it is difficult to negotiate with 153 countries as it would involve a grand bargain of compromises.

“We live in a consensus based-organisation and what that means is that 153 members have to approve on everything and what that means in practice is the least common denominator,” the U.S. trade envoy to the WTO, Ambassador Michael Punke, told a seminar organised by the European Centre for Political Economy in Brussels.

He said “we should look at the services plurilateral as a different, fundamentally different way, of approaching the agreement.” Punke argued that the RGF group would provide the ideal ground for accomplishing an outcome based on “highest common denominator” since most of them are engaged in significant liberalisation of trade in services.

However, developing countries remain opposed to the assault on the multilateral framework. “The greater the number of participants, it would be difficult to reach a common agreement but it would provide greater benefits,” said Azevedo. “In short, a modest outcome with a larger number of participants should lead to more attractive and meaningful outcome.”