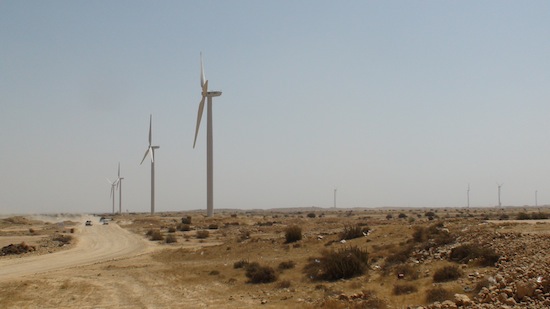 JHIMPIR, Sindh, Apr 2 2012 (IPS) - “I still cannot fathom how electricity can be produced by the wind,” said a nonplused Mohammad Ahmed, a 55-year-old local baker, as he gazed up at a row of giant wind turbines.

These huge windmills, over a dozen of them, stand tall over the horizon, visual long before one actually enters the picturesque town of Jhimpir, about 70 kilometres from the southern port city of Karachi, in the Sindh province.

Some reaching 84 metres, others towering at 94 metres tall, weighing approximately 84 metric tonnes (excluding the weight of the towers) their blades slightly longer than the spread of the wings of a Boeing 747, these wind turbines dwarf some of the tallest buildings dotting Karachi’s skyline.

The blades carve through the winds of Jhimpir, producing energy. Four of these, set up by the Turkish company Zorlu Energi, have already been producing and supplying electricity to the government for the last three months.

A year ago, when the entire country was suffering from long hours of power outages and windmills first began producing electricity on an experimental basis in Jhimpir, it was perhaps the only town in Pakistan where the lights never went out.

“It was such a delight but it only lasted a year,” said Khair Mohammad Qasi, a poet and a writer based in Jhimpir. “For the entire town, even electricity generated by one windmill is enough,” he said.

“Our target for 2013 is to produce over 400 megawatts of electricity based on the land that has been made available,” Arif Alauddin, head of the Alternative Energy Development Board (AEDB), the entity responsible for facilitating the private sector’s establishment of windmills, told IPS. “If we have more land, we think we can add 400-500 (additional megawatts) every year,” he added.

At the moment, Pakistan is facing a shortage of about 5,000 megawatts of power. Classified as the “best wind regimes” in the country, the energy produced at Jhimpir will go to the national grid, and be spread throughout the country, “wherever it is needed,” said AEDB’s spokesperson.

Overall, the Sindh province has the potential to produce 50,000 megawatts of wind energy, whereas the various pockets around the country can produce as much as 350,000 megawatts, according to the National Renewable Energy Laboratory in the United States.

Every few days, a new turbine is seen rising out of the desert-like countryside.

At the moment there are 18 private companies in the field, with projects at various stages of completion. Each project will have a generating capacity of about 50 megawatts, costing 130 million dollars, using different turbines. By next year, eight to ten of these companies will be fully operational.

This means that soon the countryside will be littered with these giant towers, which will catapult Pakistan into the top 20 producers of wind energy.

While work on wind energy has been going on for some years, it is only in the last three years that the sector actually went into high gear.

But now Pakistan seems to be making up for the lost time.

“(Besides) the developed countries with mandatory emission reduction quotas under the Koyoto Protocol, we will be the third, maybe fourth (largest producer of wind energy) after China and India,” estimated Alauddin.

But the rush to produce energy has elicited opposition from local communities. “Work is going on at breakneck speed but local people are not being employed,” said Rasul Baksh Dars, a local teacher. All their hopes that the area would be developed and they would prosper have been dashed, he added.

Anwar Palari, spokesperson of the Kohistan Bachayo Action Committee, told IPS, “They (the companies) justify hiring people from outside by saying they cannot find people with technical know-how locally; but when they launched their projects, why didn’t they train the educated youth?”

Hosh Mohammad Jatial, an engineer with Zorlu Energi, which has recently begun generation, insisted, “We have hired 15 locals out of a team of 32. We can’t increase our manpower,” he said, admitting there is a lot of pressure on his company to increase employment.

He claims that all of the local workers are “non-technical people”, adding, “We couldn’t even find a welder from the town.”

But according to Palari, the few locals who had been hired by these power companies were “qualified engineers who (were given) menial labour-intensive jobs.”

Driving away from the Zorlu wind farm, past the Fauji Fertiliser Company turbines, down a dusty, bumpy road, one finally finds the village of Umar Chang, where Mohammad Tayyeb (55), a local farmer, told IPS, “I don’t think we will ever get the promised electricity produced by these wind mills.”

“They will take it to Karachi, even Nooriabad (the industrial town closest to Jhimpir) but not give even a little bit to our village,” he added.

“It’s our land and it’s our right to benefit from any good thing happening here,” added Noor Mohammad, one of the few literate men in the village.

Tayyeb said the locals possessed land deeds dating back to the period of British colonial rule, proving that their forefathers had lived in that very village.

“We till the soil, and all this,” he waves his hand to indicate the vast expanse of land around him “are pastures for our livestock. When these companies erect more of these windmills, they will also fence the farms, thereby (shrinking) our pastures.”

Hafeez Ahmed Sial, the district coordination officer, the highest government authority in Jhimpir, is quite aware of these concerns but told IPS, “We have only given state-owned land to the investors.” He also pointed out that some people had brought in “fake papers” claiming the land was theirs.

Alauddin acknowledged that among the reasons for delay in unfettered energy production were “claims by the locals to the land”. He said that the matter is now in court.

“We want a win-win situation for all – the investor, the local people and even the government and we definitely don’t want the local people to feel disturbed. We are trying to ensure that their concerns are not left unattended. We are trying to work out how we can bring in health, water and education benefits to the communities while this development project is being carried out.”