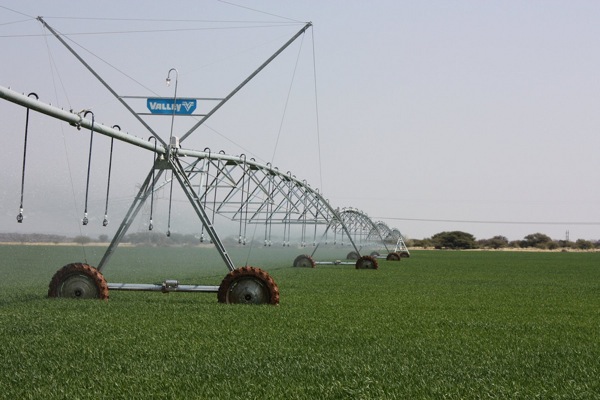 Food prices are on the rise again. Above, an irrigated field in Kakamas, South Africa. Africa is particularly vulnerable to the effects of rising prices. Credit: Patrick Burnett/IPS

WASHINGTON, Aug 30 2012 (IPS) - After decreasing somewhat in recent months, international food prices have again risen dramatically, according to figures published on Thursday by the World Bank. Statistics for July indicate a 10 percent rise over just the previous month, and a six percent increase over already high prices from the same time frame a year ago.

“Food prices rose again sharply, threatening the health and well-being of millions of people,” World Bank President Jim Yong Kim said in a statement on Thursday from the bank’s Washington headquarters. “Africa and the Middle East are particularly vulnerable, but so are people in other countries where the prices of grains have gone up abruptly.”

That list includes countries around the world. According to the World Bank’s new Food Price Watch, between June and July prices for both maize and wheat increased by 25 percent, while soybeans went up by 17 percent. That leaves prices one percent higher than the previous price peak in February 2011.

Kim noted that the World Bank has already brought its agriculture support to its highest level in the past two decades.

“We cannot allow these historic price hikes to turn into a lifetime of perils as families take their children out of school and eat less nutritious food to compensate for the high prices,” he said. “Countries must strengthen their targeted programmes to ease the pressure on the most vulnerable population.”

In recent months, watchdog groups around the world have expressed frustration with a perceived lack of both urgency and creativity on the part of national and multilateral policymakers in dealing with the return of food prices to near-crisis levels.

“Today’s World Bank report is yet another alarm bell for governments that action on food price volatility is urgently required, but it’s still not clear whether they are listening,” Colin Roche, a spokesperson with the aid agency Oxfam, said on Thursday.

Roche said that Oxfam has already started to see “the devastating impact of food price volatility in developing countries that rely on food imports”.

On Monday, the head of the U.N. Food and Agriculture Organisation, Jose Graziano Da Silva, called on the Group of 20 (G20), a multilateral grouping, to engage in “coordinated action” on spiking food prices. But that same day, the G20 decided that it would wait for September’s U.S. crop report before deciding how to proceed, a move decried by Oxfam.

“The G20 must act now before prices spiral out of control and push more people into hunger,” Roche warned. “This ‘wait and see’ attitude is unacceptable, especially when the World Bank report has warned that prices are expected to remain high and volatile.”

Much of the concern today is over the ongoing drought in the United States and in parts of Europe. The situation in the U.S. alone could have a devastating effect on food stocks and prices internationally, as the country is the world’s primary supplier of both maize and soybeans.

As of mid-August, the United States government had classified nearly 1,800 counties throughout the country as disaster areas, mostly due to a grinding drought that, even if it were to end soon, has already gutted this year’s harvest for many grain crops.

By late July, nearly three-quarters of the U.S. maize crop was officially rated very poor to fair. That’s a stark turnaround from forecasts made earlier this year of a record maize harvest in the U.S., which many were hoping could help shore up depleted foodstores in other countries.

Although more extreme than what has been seen in recent months, the new World Bank numbers extended a trend of volatility that has held over the past year as well as a trend of high food prices that dates back to 2008, when a confluence of issues created a sudden crisis in foodstores and prices that strained local communities globally and took many policymakers by surprise.

The 2008 experience helped to reverse a two-decade international decline in investment in agriculture.

“What we saw in 2008 – those high prices never really went away, especially for the developing world,” Danielle Nierenberg, director of the Nourishing the Planet programme at the Worldwatch Institute, an environment-focused think tank based here in Washington, told IPS.

“While the renewed investment in agriculture since 2008 has been much needed, it has been mostly focused on long-term, technology-focused research. We need a 180-degree turn in thinking in how we approach agriculture.”

Overlooked in today’s renewed agriculture policy, Nierenberg said, are “those things we already know work”, such as a spectrum of sustainable practices, rainwater harvesting and the use of natural fertilisers. She also highlights a need to return to national policies of storing grains and other foodstuffs, a practise that has faded in recent years.

“The silver lining of the current drought is that the West can perhaps take a new look at the sustainable practices that have been helping many African farmers combat drought,” she said. “This is an opportunity for the Western world to look to the developing world – they have a lot to teach us.”

Nierenberg suggested it will be at least a year or more before the full ramifications of the current situation are fully understood. Others suggest that the situation today is probably the new normal.

“My sense is that we are in a transition from an age of abundance to one of scarcity,” Lester Brown, a longtime sustainability advocate with the Earth Policy Institute here in Washington, told IPS.

In this, Brown notes not only a fast-growing global population but, more importantly, the inevitable effects of rising affluence. Over the past decade alone, he said, world grain demand has doubled, from 21 million tonnes per year to 41 million.

While the impact of demand for biofuels has also been widely felt on grain stocks in recent years, particularly leading to the economic collapse in 2008, Brown suggested that this demand is already starting to decline.

“Once we’ve set aside the issue of ethanol” – a common biofuel – “the big thing now is the fact that three billion people in the world are trying to move up the food chain and are clamouring to consume more meat, especially in China,” he explained.

Meanwhile, for years it has been apparent that arable land is becoming increasingly scarce. Now the same can also be said of irrigation water, including in the world’s three most important grain producers, China, India and the United States.

“We need to recognise that agriculture as we know it evolved over 11,000 years of remarkable climate stability – the system is designed to maximise production within that system,” Brown said.

“But that is now changing; today, we have constant flux. And with each passing year, the systems of climate and agriculture are becoming a bit more out of sync with one another.”