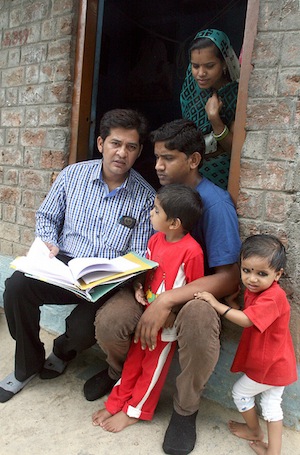 But when repeated administration of the anti-ulcer drug Rabeprazole started to exacerbate his condition, his parents stopped treatment and sought help from the Clinical Trial Victims Association (CTVA), which discovered that the boy had been a lab rat for an untested drug.

“We should have been told an unknown drug was being tested on our innocent child and given the choice to say no,” Deepak’s father Sooraj told IPS.

Deepak is now almost entirely reliant on his mother for survival. The family is poor, yet “doctors did not take any steps to get us compensation,” his father added.

This family’s tragic story is just one example of a sinister pattern unfolding across India.

A spate of deaths over the last four years caused by illegal clinical trials of untested drugs has ignited the wrath of rights activists and prompted prominent legal institutions to consider tightening the country’s drug regulation laws.

In response to a Right to Information query filed by Indore-based medical rights activist Anand Rai, the Drug Controller General of India (DGCI) disclosed that 2,031 people have died as a result of serious adverse events (SAEs) during drug trials in the past four years.

Rai, who is currently spearheading a campaign against unethical drug tests on human beings, has urged legal authorities and activists to raise their voices against clinical trials in which desperate people become easy prey for multinational pharmaceutical companies.

He told IPS that most of the victims were illiterate and poor people.

“Clinical trials on citizens without their consent is considered a violation of basic human rights and often results in the death of innocent persons, who were not even aware of the kind of tests being (performed) on them, since clinical research organisations use roundabout ways of acquiring the consent of patients and their relatives,” he said.

Many of the institutions involved in the drug trials fail to “provide the patients with copies of the informed consent form, patient’s information sheet or clinical trial liability insurance policy,” according to the CTVA. As a result, very few victims have access to compensation.

An intervention by the Supreme Court of India last month further exposed the unethical practices of clinical researchers and pharmaceutical companies.

A division bench headed by Supreme Court Justice R M Lodha stated in early July that it was “unfortunate” that humans are being treated as “guinea pigs” for testing of drugs and vaccines produced by multinational corporations.

Experts on medical law assert that tight regulations in Europe and the U.S. prompt many pharmaceutical companies and research organisations to look to India and other developing countries as cheaper and less restrictive sites for drug trials.

Dr. Mohan Rao, professor at the centre for social medicine and community health at Jawaharlal Nehru University in New Delhi, told IPS that India did not have a proper regulatory authority to monitor the trials of new drugs.

“We have unfortunately opened our health sector to global pharmaceutical companies for trials without the infrastructure to monitor and regulate them. It is cheaper for transnationals to locate trials in India, which has a large and captive (drug) market, in addition to doctors not constrained by ethics,” he said.

“The growth of local clinical research organisations has also contributed to this. Above all, we have a large and unregulated private medical sector with a culture of impunity. For the general public, and the elites, the lives of the poor do not matter,” Rao added.

The CTVA said that many doctors give more importance to their earnings than to the lives of their patients.

“Lured by offers (from) big pharmaceutical companies, these doctors have deliberately violated all regulations and have reduced clinical trials to a money spinning exercise,” according to a statement on the CTVA website.

According to the Financial Express daily, stiff opposition from research organisations on how clinical trial victims should be compensated has dealt a blow to the health ministry’s efforts to legislate the practice.

The ministry was on the brink of making it mandatory for pharmaceutical companies sponsoring clinical trials to pay financial compensation to volunteers in case of a proven trial-related death or injury, the Financial Express reported on Jul. 4.

Eminent drug regulatory expert C M Gulhati believes compensation rules in the Motor Vehicle Act can serve as a basis to determine the amount of compensation, while other factors such as the age of the volunteer, number of dependents and prevalent morbidity in the community should also be taken into account in an effort to standardise such payments, according to the newspaper.

Activists say many clinical trials in the country have been conducted behind a veil of secrecy and with little transparency in clinical research.

One such dubious deal was brought to light in 2001, when a group of cancer patients was subjected to drug trials under an agreement between the Thiruvananthapuram-based Regional Cancer Centre and the renowned Johns Hopkins University in Baltimore.

Compounding the issue, according to Dr. Sree Kumar, a private medical practitioner in Chennai, “is the easy availability of a large population of patients in Indian hospitals displaying a broad spectrum of conditions.”

“Collaborative ventures between Indian hospitals and foreign pharmaceutical industries and academic institutions ensure that the lab-to-market journey of a new product is achieved at a low cost and shorter duration,” he added.

The flip side of the illegal testing coin can be equally problematic. A panel of lawmakers in the Indian Parliament headed by Brajesh Pathak recently discovered that many popular medicines were being sold without having undergone clinical trials at all.

Lambasting the collusive role of the Central Drugs Standard Control Organisation, the parliamentary standing committee for health and family welfare said that 33 new medicines were found to have been approved between January 2008 and October 2010 without undergoing trials.

Dr. A. B. Salim, an independent researcher in Bangalore, told IPS that a drug tested successfully on animals could produce harmful side effects when administered to human beings.

“Therefore it is the duty of the ethics committee and the DCGI to monitor and ensure that the trials are done honestly,” he added.