Feminine Creativity in the Face of Natural Disasters in Cuba 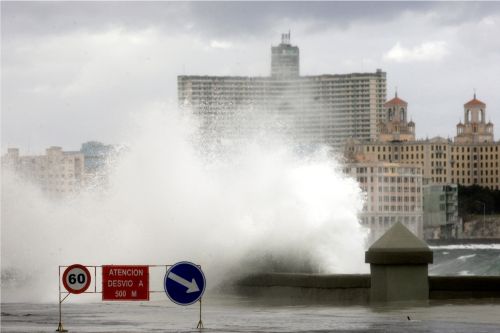 Areas along the Havana shoreline flood up to two metres in depth during tropical storms. Credit: Jorge Luis Baños/IPS

HAVANA, Aug 27 2012 (IPS) - Blanca Lima raises all her appliances above flood level, puts boxes of clothes on top of wardrobes, and fills the shelves she installed near the ceiling with all kinds of objects. In less than an hour, she is ready to evacuate her home in case of a flood in the Cuban capital.

“When they announce that there will be a high sea and flooding, I already know where I’m going to put the refrigerator and set up a platform to raise the mattresses. I have weathered so many floods that I now have a whole system for dealing with them,” Lima told IPS.

In their homes, Cuban women come up with strategies to minimise the danger and losses during natural disasters like hurricanes. Gender expert Isabel Moya says women have special talents in terms of organising and empowering their communities during extreme events.

“The strengths of women have helped transform traditional practices and dynamics, in environmental protection and risk management, for example,” Moya told IPS. She advocates the recognition not only of the double workday of women, their jobs and household responsibilities, but of a triple workday, which includes their work in the community.

According to Moya, girls are educated in “the culture of care, a capacity that is later transformed into strong neighbourhood involvement by women.

“They relate to each other and establish solidarity among themselves in a different way. These skills can generate a change in community ties,” she said.

Lima travelled to the outskirts of Havana to try to buy scraps of “jaimanitas”, a typical flagstone used in Cuba to protect walls from the damp, at a discount for herself and her neighbours.

“People who live in low-lying parts of this area are generally older, retired persons, with little buying power,” said Lima, who resides in the low-lying area of the residential neighbourhood of Vedado, in the Cuban capital.

“To reduce damage to housing, you need to pave with jaimanitas, but the stone is very expensive,” said Lima, a retired purchasing agent. At the Havana office of the Empresa Mármoles Cubanos (Cuban marble company), she got scraps for her home, and explained to the local government the procedure for obtaining them at a low price for people in her community.

Especially during the June to November hurricane season, the sea floods homes in this poor neighbourhood located near the Havana malecón – an eight-km wall that lines the coast in the capital. During storms, the water can penetrate several blocks uphill from the malecón, at a depth of two metres, according to the Institute of Meteorology (INSMET).

An article published this year by INSMET researchers in the local scientific journal “Ciencias de la tierra y el espacio” (Earth and Space Sciences) analysed the data on flooding along the Havana malecón between 1901 and 2011, and concluded that the problem was becoming more frequent and more intense, thus posing greater risks, as a result of climate change.

“I lost so much in 1993. That is not going to happen to me again,” Lima said, referring to the so-called “storm of the century”, which caused the greatest devastation to her home along with Hurricane Wilma in 2005.

The 1993 superstorm, the most intense registered up to then in the Atlantic Ocean, did not touch land in Cuba. Nevertheless, it caused severe flooding along the Havana coast. More than 20,000 people were evacuated in Havana and some 200,000 from the areas at highest risk throughout the country.

In the part of Havana where Lima lives, which mainly has buildings several stories high, “almost no one goes to the designated shelters anymore when there is a risk of flooding,” she said.

“The tradition of taking in families from lower stories has been passed down from generation to generation in my home,” her fourth-floor neighbour, Nélida Borigan, told IPS. She takes in Lima and her family when natural catastrophes hit.

Borigan said women play a key role in making the maximum use of the potential of each neighbourhood.

Because of the division of domestic labour, “giving shelter to other people is a burden carried by women,” Borigan said.

In a society that is still patriarchal, the weight of the home falls on the shoulders of women, who in 2011 represented 60 percent of university graduates and 63 percent of the technical staff employed in the public sector, according to the National Office on Statistics and Information.

For that reason, Moya suggests using the civil defence office’s public service announcements to show both men and women involved in disaster prevention and preparedness measures, in order to break with traditional stereotypes.

The civil defence office is working to achieve a higher level of citizen participation during disasters. Depending on the magnitude of the threat and the characteristics of each locality, the office provides guidance on how many people should take shelter, and keep certain possessions, in nearby safe places to avoid transporting entire families and their household goods.

Some people believe the civil defence office should provide them with assistance, whereas others manage to organise themselves and collectively solve their problems. “Women can generate a change with respect to the care of the community,” Moya said, referring to initiatives that are not deeply rooted on the island, such as women’s networks.

“Refurbishing housing units (after a storm) depends on the drive of local inhabitants and the neighbourhood. Participation by women is a defining aspect when it comes to building, cleaning up and preventing the spread of disease,” journalist Ana Esther Zulueta, from the Isla de la Juventud, the second-biggest island in the Cuban archipelago, told IPS.

“To address what the future has in store as a result of climate change, people, especially women, have to gradually find their own systems of adaptation and share their knowledge,” said Lima, as she opened the doors of her house to anyone interested in listening to her advice on how to deal with floods.