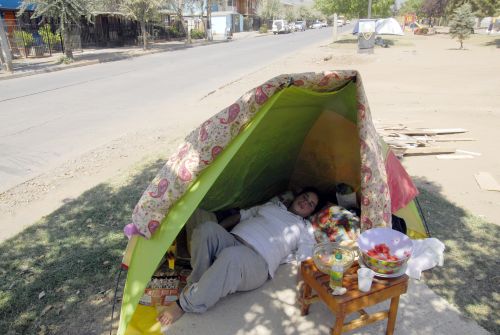 A young pregnant woman rests in an improvised tent on the street after the 2010 earthquake. Credit: Fernando Fiedler/IPS

SANTIAGO, Aug 9 2012 (IPS) - It’s Friday morning, and Carlos, an executive at a real estate firm in the Chilean capital, gets up knowing that he will knock off early that day, as he does at the end of every week, to enjoy the weekend in the family’s vacation apartment on the coast with his wife and three daughters.

At the same time, on the other side of Santiago, Pablo, the third of four children from a poor rural family who now live in the Chilean capital, has been lugging sides of beef since dawn in a meat-packing plant, where he will work his nine-hour day as usual.

Carlos earns some 6,000 dollars a month – nearly 17 times the minimum monthly wage of 364 dollars, which is what Pablo takes home.

Both men are from Chile, a country that for decades has been proclaimed the “Latin American miracle” because of its booming economy and the reduction of the poverty rate. But the gap between rich and poor is still one of the widest in Latin America, which in turn is the most unequal region in the world.

That is why the right-wing government of Sebastián Piñera celebrated the announcement that the gap had shrunk, according to the latest edition of the national socioeconomic survey, CASEN, published Jul. 24.

The figures show that the richest 20 percent of the population received 35 times the income of the poorest 20 percent in 2011, compared to 46 times in 2009.

And if public assistance for low-income sectors is factored in, “that inequality shrinks further: in 2009 the difference was 25 times, and this was reduced to 22 times in 2011,” the president said.

But just as money is not the only factor in ensuring quality of life, the difference in wages is not sufficient to explain the inequality.

Carlos lives in a spacious five-bedroom, three-bathroom house in the upscale district of Las Condes, in eastern Santiago.

Pablo lives in a small two-room house in Lo Prado, on the west side of the city. The crowded house has been expanded with two improvised rooms made of wood and other materials to accommodate himself, his partner and their two small children, aged one and four years, as well as his mother and a younger sister.

These days, to keep warm in the southern hemisphere winter, Pablo’s family heats the house using a homemade brazier – the most economic way to stave off the cold, but also the most dangerous, as reflected by the frequent fires caused by this source of heating.

But poverty still affects 14.4 percent of the country’s 17 million people, while 2.8 percent are extremely poor, according to CASEN, the main measurement tool used to design and evaluate the country’s social policies.

But experts who talked to IPS were not as upbeat as the government with regard to the new statistics.

“CASEN has lost all credibility when it comes to measuring poverty and inequality,” economist Gloria Maira told IPS. “It is a survey based on parameters that do not fit today’s Chile, and it is a statistical exercise based on certain assumptions that actually say very little about the real levels of poverty and inequality.”

CASEN’s poverty and extreme poverty thresholds are based on the value of the basic food basket, which is currently 146 dollars a month. But this does not take into account other needs like healthcare, housing, education or transportation, she said.

The economist argued that if up-to-date criteria were used, the poverty rate would turn out to be considerably higher – a political cost that no government wants to assume.

“We are caught up in the numbers, and we hardly look at quality of life,” anthropologist Mauricio Rojas told IPS, saying it was important to determine the chances people have of living in dignity.

Before he reaches his office, Carlos has time to drop his daughters off at their private school, where tuition is 500 dollars a month.

But Pablo, because he has to get to work so early, can’t take his children to the public preschool, which cares for children from 8:00 AM to 4:00 PM and serves them free lunch and a snack.

The availability of free public child care sounds impressive. Nevertheless, one of the roots of the high level of inequality in Chilean society lies in the educational system, which is fragmented into three branches: decentralised public schools, subsidised private schools, and private schools that charge tuition.

The constitution does not guarantee the right to education, and the educational system is governed by the profit motive, according to critics. And unlike public universities in the rest of Latin America, universities in Chile charge enrolment and tuition fees.

“Poverty is reflected in access to education, healthcare, and health insurance coverage, which should be essential roles played by the state,” Rojas said.

Carlos has health insurance under the private system created in 1981 by the 1973-1990 dictatorship of General Augusto Pinochet. The steep monthly fees give him and his family access to the country’s best clinics and doctors.

Pablo, thanks to his job, is covered by the state National Health Fund, which operates principally with public hospitals and clinics, where healthcare services are slow and often low quality.

He says that when he has to go to the hospital, “it is sad and humiliating. You have to wait for hours to be attended, even when it’s one of my small children who need care. When you finally see a doctor, they barely explain what’s wrong with your child, they mistreat you, and they send you home. A few days later you have to go back, because your child is worse. It’s like that every winter.”

Like so many poor families in Santiago, Pablo’s suffers the health problems that are especially bad in the winter. The notorious smog in the capital, which is in a natural bowl surrounded by mountains, combined with the cold temperatures causes an explosion of respiratory problems: 4,200 people a year die in the city as a result of air pollution.

The consumption society is incapable of meeting the basic needs of many of Chile’s citizens. But there is a high level of tolerance of inequality in this country, Rojas said.

In his view, “there is a consumption society, which is successful, and that provides kind of a mirage of social integration through objects and material goods, while hiding the very real social rights that are restricted,” he said.

At the end of their workday, Carlos and Pablo leave their jobs. As the sun sets, Pablo rides home on the crowded Transantiago public transportation system. By that time, Carlos is already enjoying a glass of wine on the balcony of his vacation flat, with a view of the Pacific Ocean.