Palestinians Find Refuge Across the Atlantic 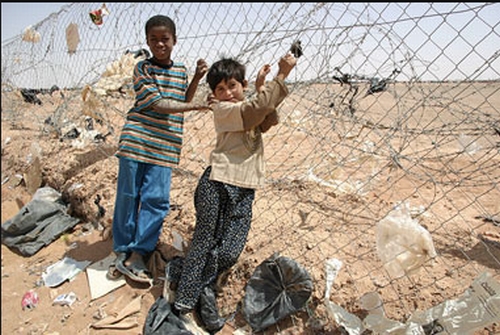 RIO DE JANEIRO, Aug 28 2012 (IPS) - Issam Ali Hassan spent more than four years in an isolated desert camp in Jordan before he was taken in by Brazil. The son of Palestinians had been living as a refugee in Baghdad when he had to escape after the United States invaded Iraq in 2003.

He was given a new lease on life by Brazil’s Solidarity Resettlement Programme run by the government of Dilma Rousseff with the support of the U.N. refugee agency, UNHCR.

Today, at the age of 30, Hassan has still not forgotten the anguish, loneliness and desperation of the desert camp of Ruweished in Jordan, located 70 km from the border with Iraq, where he shared the harsh conditions in improvised tents with other Palestinians, as well as Somalis, Iranians, Kurds, Sudanese and Algerians.

He agreed to tell his story to IPS, but he did not want any photos taken.

“In 2003, when the war was two weeks old, I had to leave,” he said. “It’s really hard to get that time out of my head, because I suffered a lot. I lived alone in the camp. I didn’t have any work and I couldn’t study, I was far away from my family, and I had no contact with the outside world.”

Refugees from a number of countries who had spent years in Iraq fled the war towards Jordan, which refused them entry. Thousands were stranded in a no man’s land between the borders of the two countries. Some were finally given shelter in Ruweished camp.

But despite the UNCHR’s efforts, the refugees in the desert camp lived in near total isolation, and in extreme conditions.

In the summertime, the temperatures in the tents climbed to 60 degrees Celsius, and in the wintertime, it was freezing. There was no electricity, and the water and food were rationed.

“I had a right to 20 litres of water per day. They gave us vegetables three times a week, but later that was reduced to two times. To buy food, people worked cleaning bathrooms and other installations,” he recalled.

One night, a tent caught fire, and a five-year-old girl burned to death. “When I talk, the images run through my mind like in a movie. I don’t want to remember, but I can’t help it,” Hassan said.

“I wanted someone to save me from that land. Everyone wanted to leave, find a rich country that helped refugees, like Australia, Sweden, Norway or Canada.”

Then “a light appeared, which was Brazil, and I ran after it. But I left there without any hope. Our dreams had died, he said.

In October 2007, Hassan formed part of a group of 108 Palestinians who left Ruweished camp, on their way to Brazil. On Nov 5, 2007, when the last family left, the camp was closed.

The Palestinians were the first non-Latin Americans to benefit from a resettlement programme proposed as one of the lasting solutions offered under the Mexico Plan of Action to Strengthen International Protection of Refugees in Latin America, adopted by 20 countries in this region in 2004.

One part of the group went with Hassan to the state of Rio Grande do
Sul, in the extreme south of Brazil, with the assistance of the Jesuit Antônio Vieira Association. The rest went to the interior of the southern state of São Paulo, with the aid of Caritas Brazil.

The nearly 20 hour trip left him in Porto Alegre, the capital of Rio Grande do Sul, with 50 other Palestinians, most of them single men without families.

They were assisted by Brazilian authorities, UNHCR officials, and the local Arab community. Hassan spent a month living in a church until he was assigned a small apartment and a stipend of 170 dollars a month for two years.

“I learned to speak Portuguese at work,” he said. “The religion is different, the customs and even the climate are different, and the language is difficult.”

He journeyed all around this enormous country looking for work, from Porto
Alegre to Rio de Janeiro, through São Paulo, and around the states of Mato Grosso, in the west, and Rondônia, in the northwest.

He worked as a security guard in clothing stores, in poultry and beef processing plants, and in the kitchen of an Arab restaurant.

Today, back in Rio, he has a stable life. He was embraced by the family of his Brazilian wife of Arab descent, who is now carrying their second child.

Since a year and a half ago, Hassan has been the owner of a small children’s clothing shop in the Rio neighbourhood of Tijuca, which makes him especially proud because he built it with his own hands.

Although he has been in Brazil for five years, he is not yet a permanent resident, which means he cannot get a passport to go and visit his family, who are scattered around the world, and who he has not seen for 12 years. His seven brothers live in Sweden, Norway, Greece and Jordan, and his mother and his sister are in Iraq.

He complains about the scant aid he received as a refugee. Most of the families who stayed in Porto Alegre continue to receive assistance today, but the single men were left on their own, he says.

“After two years I didn’t receive any more help, and the wages I earned were very low.” He doesn’t know much about what happened to the rest of the Palestinians who travelled with him, but he does know that some were not as fortunate as he was. “Some ended up begging on the streets, or got caught up in drugs. But others found a stable job, and are hard workers.”

The Solidarity Resettlement Programme provides two years of coverage, which in some cases is extended to four years, depending on the beneficiary’s “degree of integration in society,” UNHCR spokesman in Brazil Luiz Fernando Godinho told IPS.

In this country of more than 192 million people, refugees enjoy the same basic rights as Brazilians and have access to public education and public health.

Only a small group of Palestinians continue to receive UNHCR aid. They are individuals who are sick and vulnerable, and who receive housing, a monthly stipend, and psychological and social support, Godinho said.

Karin Wapechowski, coordinator of the Antônio Vieira Association in Porto
Alegre, received the refugees like Hassan in 2007. At the time, she contacted the Arab-Palestinian communities in the region, to get help in welcoming the new arrivals.

Sixty-eight of them are living in Rio Grande do Sul, Wapechowski told IPS. “At first it was hard. But now they speak Portuguese, and their kids also adapted, and are fluent. They have integrated well. It’s more difficult for the older people, but the younger ones married, had Brazilian kids, and put down roots,” she said.

A support network was set up to help the Palestinians understand the local culture, diet and religion, she said.

“It was a challenge,” Wapechowski said. “Until then, we only had experience in taking in Colombians. We prepared a package with Portuguese classes and geographic and cultural information on Brazil. The aim of the resettlement was inclusion for these people, and we are still keeping track of the families.”

Although he has adapted, Hassan says that being a refugee is a scar that never disappears. “I lived my entire life as one. I’m not identified by my nationality, but as a refugee.”

That is the problem shared by all Palestinians, whose land was occupied by Israel. “The common problem is that they remain refugees and there is no political solution to that question,” Filippo Grandi, head of the U.N. Agency for Palestine Refugees, told IPS.

Nearly five million Palestinians, eternal refugees, live in Lebanon, Syria, Jordan and the occupied territories, while tens of thousands live in other countries of the Middle East and in North Africa.